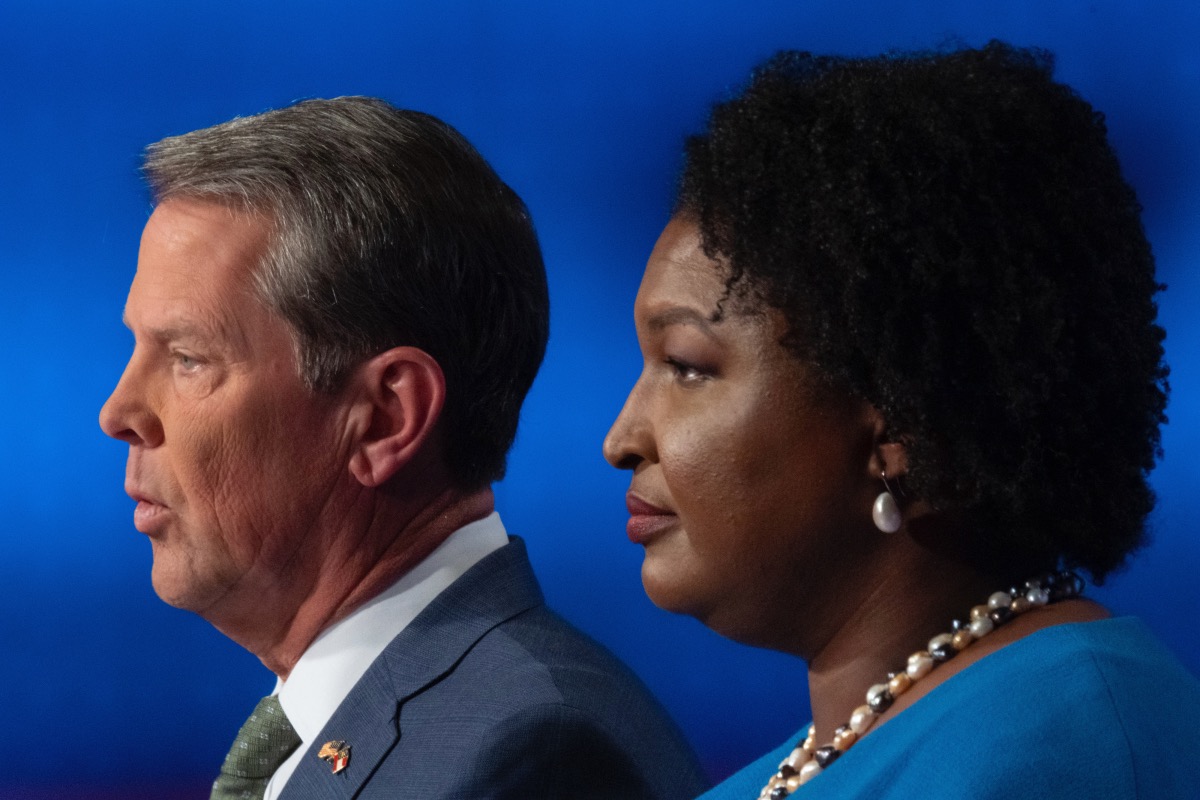 In the U.S. Senate race, where both candidates are Black, Latinos give the Democrat a considerable edge.

The choices raise questions about whether race and gender may play a role in the way Latinos vote this November, particularly those who identify as independents. A plurality of independents (41 percent) said they plan to vote for Democratic Sen. Raphael Warnock over her Republican challenger, Herschel Walker (37 percent), while Kemp won a majority of independents (53 percent) over Abrams (32 percent).

Among Latinos overall, Warnock has a 52 percent favorability rating, while Walker has 31 percent.

Walker, campaigning as a pro-life conservative, has been plagued by allegations from two women who say he paid for their abortions. Walker has flatly denied the accusations.

“Well, I’m voting for Warnock because I think we can all agree that Walker is a joke,” poll respondent Jose Garcia, who graduated from high school last year, told Latino Rebels. “I also had a chance to talk to Warnock, and we agree on most things—most importantly, Second Amendment rights. Gov. Kemp also helped with a major win for the Second Amendment community—that’s constitutional carry.”

“Kemp has been a very effective governor, continuing Georgia’s yearslong success in creating jobs and growing our economy, and navigating COVID in common sense ways,” said Robert Garcia, a workforce development consultant. “Importantly, he refused to follow Trump’s election fraud claims and stood by the 2020 election results. He has proven to be honest, whereas Abrams has proven to be dishonest.”

Despite what is broadly seen as anti-Latino immigrant rhetoric by the Republican Party overall, the political right has made inroads among Latino voters, challenging a long-held assumption that they lean Democrat.

Republicans have also skillfully used the culture wars surrounding the economy, immigration, and crime to distract voters away from attacks on voting rights and abortion bans.

Forty percent of Georgia respondents said Democrats represent their interests, while 34 percent of Republicans said the same. Yet only 36 percent of independents favor Abrams—far below the 54 percent who favor Gov. Kemp.

“I am generally very conservative, but I think the GOP has largely abandoned conservative values and ideas as they have fecklessly followed Trump,” said Garcia. “But Abrams is extremely progressive, out of step with Georgia voters, and I think has promoted really dangerous ideas.”

The polarization of Georgia’s electorate came into full focus after last year’s passage of the Election Integrity Act, a law that mandates voter identification requirements on absentee ballots, limits the use of ballot drop boxes, reduces the amount of time people have to request an absentee ballot, makes it a crime for outside groups to distribute food or water to voters waiting in line, and gives the Georgia General Assembly greater control over election administration, among other provisions.

Critics have described it as a broad Republican-led effort to implement anti-Democratic voting restrictions against people of color. President Joe Biden referred to the law as “Jim Crow in the 21st century,” and the Department of Justice sued Georgia in June of 2021 saying the act was racially discriminatory.

The Republican strategy of focusing on issues such as crime, the economy, and immigration provided the party an opportunity to take attention away from voting restrictions, which disproportionately affect Black and Latino voters, as well as another hot-button issue: abortion rights.

According to the Futuro poll, half of all respondents (51 percent) said they would be more likely to vote for a candidate who wants to “codify Roe v Wade into law to protect abortion rights in every state,” with 84 of Democrats saying so, compared with 40 percent of independent and 17 percent of Republicans saying the same.

Several trends suggest that Latino voting patterns are similar to the voting patterns of white voters. Protestant Latinos, for example, are more likely than Catholic or religiously unaffiliated Latinos to support anti-immigrant views and ideologies that align with those of white evangelicals. Many are also open to homophobic and transphobic ideas alongside various anti-Black beliefs.

When discussing Florida Gov. DeSantis’ favorability among independents exceeding that of Abrams, many respondents were dismissive of his policies. While his sending migrants to Martha’s Vineyard in September sparked widespread condemnation, many Latinos have sided with the move. In Florida, for instance, Latino Republicans and independents combined to give DeSantis majority support, with 51 percent approving and 49 percent disapproving of the move.

What Republicans seem to be doing well revolves around class and race, the politics of which many immigrants from places like Cuba and Venezuela bring with them. For such groups, often seeming themselves as whiter and thus part of the upper classes, the image of darker and poorer people coming to the U.S. leads them to call for restrictions on immigration.

And exploiting such racism and nativism serves well for Republican campaigns like DeSantis’, Trump’s, or Kemp’s.

For Latino Democrats, what’s at stake in Georgia covers a lot of ground. Women’s rights, voting rights, bigotry and hate in government, police accountability, immigration reform, education, and social programs such as fighting poverty all registered with respondents.

Crime, immigration, and the economy also remain top issues—similar to their more conservative counterparts. The differences lie in what each group considers solutions to those problems.

According to the Futuro survey, Latino Democrats in Georgia show greater support for popular policies than independents and Republicans. As with the codification of Roe v. Wade, more Latino Democrats (93 percent) say they would be more likely to vote for a candidate who wanted to expand healthcare to everyone, compared to smaller shares of Republicans (55 percent) and independents (30 percent) who say the same.

Fifty-four percent of Latino Democrats say they are more likely to vote for someone who supports “allowing Puerto Rico and other colonies to vote for independence or statehood,” compared to 37 percent of independents and 28 percent of Republicans.

Sixty-eight percent of Democrats also say they are more likely to vote for a candidate who supports “immediately granting citizenship to all immigrants without papers who want it if they haven’t been convicted of a violent crime,” while independents (28 percent) and Republicans (11 percent) say they would be less likely to do so.

As the country ponders what “the Latino vote” will yield, Republicans’ success in taking up the slack from Democrats and making inroads with the growing Latino population could inevitably come back to haunt them in the upcoming election and beyond.