With Bolsonaro Tamed in Defeat, Brazil Steps Back From Brink 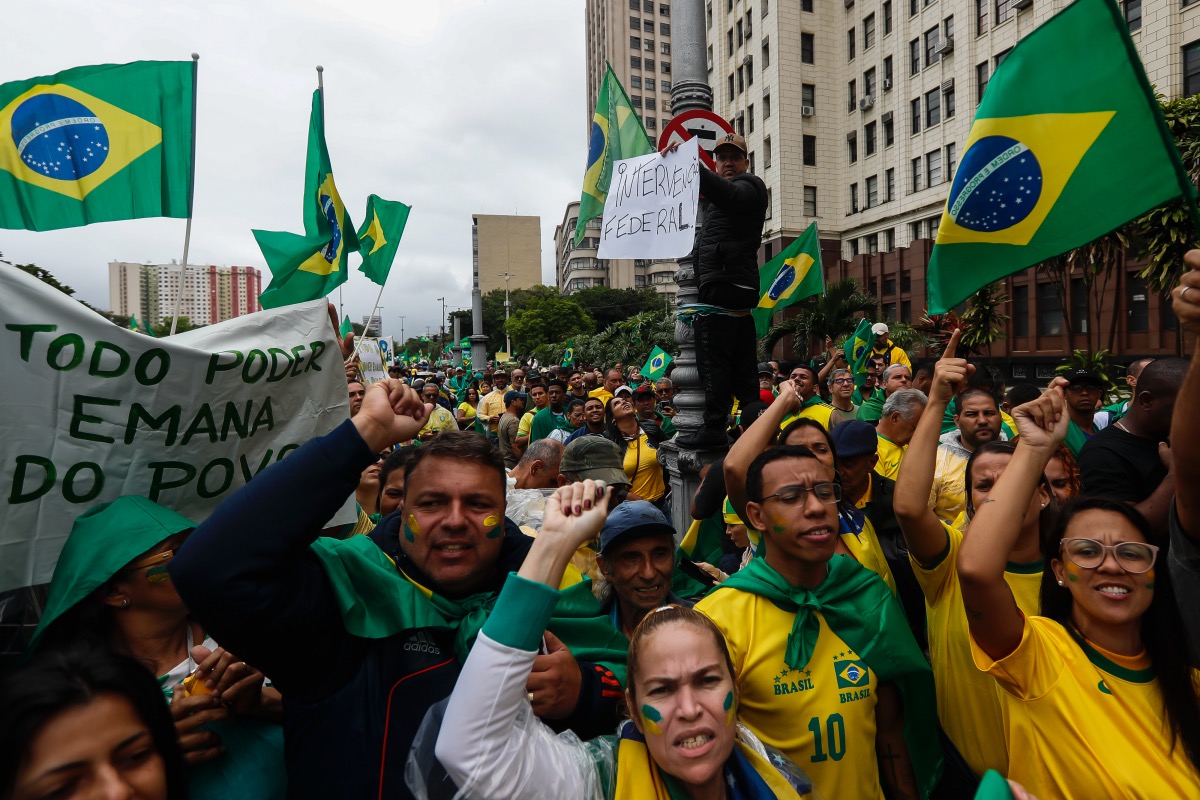 Supporters of President Jair Bolsonaro protest his defeat in the presidential runoff election, in Rio de Janeiro, Brazil, Wednesday, November 2, 2022. Thousands of supporters called on the military Wednesday to keep the far-right leader in power, even as his administration signaled a willingness to hand over the reins to his rival Luiz Inacio Lula da Silva. (AP Photo/Bruna Prado)

RIO DE JANEIRO (AP) — In the run-up to Brazil’s presidential election, many feared a narrow result would be contested and spell the death knell for Latin America’s largest democracy.

So far, however, the worst fears have been averted, despite a nail-biting victory for former leftist President Luiz Inácio Lula da Silva over far-right incumbent Jair Bolsonaro, and ongoing protests by some of Bolsonaro’s supporters across the country.

The conservative leader’s allies quickly recognized da Silva’s victory, the military stayed in the barracks, and vigilant world leaders swooped in to offer support for da Silva and nip in the bud even the thought of anything resembling the January 6 insurrection that overtook the U.S. Capitol.

“All of Bolsonaro’s escape valves were shut off,” said Brian Winter, a longtime Brazil expert and vice president of the New York-based Council of the Americas. “He was prevailed upon from all sides not to contest the results and burn down the house on his way out.”

Although Bolsonaro has refused to congratulate da Silva, Brazil’s institutions generally seem to have held up.

Bolsonaro gave a video statement Wednesday calling for an end to the protests by his supporters. “I know you’re upset. I’m just as sad and upset as you are. But we have to keep our heads straight,” he said. “Closing roads in Brazil jeopardizes people’s right to come and go.”

That leaves a more vexing challenge: how the 77-year-old da Silva, universally known as Lula, unites a deeply divided country, rights a wobbly economy, and delivers on the outsize expectations spurred by his return to power.

One thing is clear: If anyone can do it, it’s the charismatic da Silva, whose political skills are admired even by his detractors.

“That’s what we need, someone not only who can address inequality but also inspire our emotions and ideas,” said Marcelo Neri, director of the Getulio Vargas Foundation’s social policy center and a former strategic affairs minister for da Silva’s handpicked successor, Dilma Rousseff.

In many ways, the conservative movement Bolsonaro helped ignite —if not the politician himself— has emerged stronger from the vote, Winter said. His allies were elected as governors in several key states, and his Liberal Party has become the largest in Congress, curtailing da Silva’s ability to advance his own agenda after a decade-long malaise that has left millions of Brazilians hungrier than when da Silva last held office in 2010.

What’s more, Brazil’s demographics seem to favor Bolsonaro’s aggressive brand of identity politics —including an anti-LGBTQ agenda and hostility to environmentalists— that have earned him the moniker the “Trump of the Tropics.”

The country’s own statistics institute forecasts that the number of Brazilians identifying as evangelical Christians, who preelection polls show overwhelmingly favored Bolsonaro and skew right, will overtake Roman Catholics within a decade.

Thousands of Bolsonaro’s supporters thronged a regional army headquarters in Rio on Wednesday, demanding that the military step in and keep him in power. Others showed up at military installations in São Paulo, Santa Catarina, and the capital of Brasilia. Meanwhile, truckers maintained about 150 roadblocks across the country to protest Bolsonaro’s loss, despite the Supreme Court’s orders to law enforcement to dismantle them.

At one of the road blockades held by truck drivers in the interior of São Paulo state, a car drove into the crowd and injured several, including children and members of the police.

Since the return of democracy in the 1980s, all Brazilian leaders have been guided to varying degrees by a common belief in strong state-led enterprises, high taxes, and aggressive wealth redistribution policies.

Bolsonaro initially attempted to run a more austere, business-friendly government—that is, until the social devastation wreaked by COVID-19 and his own sinking electoral prospects ultimately led him to loosen spending controls and emulate the policies he once attacked.

How da Silva will govern is less clear. He squeaked out a narrow victory of barely two million votes after building a broad coalition united by little more than a desire to defeat Bolsonaro. And with promises to keep a generous welfare program in place through 2023, he will have limited fiscal space to spend on other priorities.

His running mate from another party, former Sáo Paulo Gov. Geraldo Alckim, was a nod to centrist, fiscally conservative policies that made da Silva the darling of Wall Street during his early years in power. This week, da Silva tapped Alckim to lead his transition team.

Also standing alongside him on the victory stage Sunday night, however, were several stalwarts of the left who have been implicated in numerous corruption scandals that have plagued his Workers’ Party and paved the way for Bolsonaro’s rise.

Although da Silva’s supporters have downplayed the concerns about corruption —the Supreme Court annulled the convictions that kept him imprisoned for nearly two years— for many Brazilians he is a symbol of the culture of graft that has long permeated politics. As a result, he’s likely to be held to a higher ethical standard in a country where almost every government has been accused of vote buying in Congress.

“This wasn’t just a fever dream by his opponents,” Winter said of the corruption allegations that have long dogged da Silva’s party.

Da Silva’s victory coincides with a string of recent victories by the left in South America, including in Chile and Colombia, whose leaders revere the former union boss. During his first stint in power, da Silva led a so-called “pink wave” that promoted regional integration, rivaled U.S. dominance, and put the rights of overlooked minorities and Indigenous groups at the center of the political agenda.

Under Bolsonaro, Brazil largely retreated from that leadership role, even if the sheer size of its economy alone means a return to leadership is never far off.

Scott Hamilton, a former U.S. diplomat, said that da Silva will have to make a tough choice on whether to use Brazil’s considerable leverage to pursue an ambitious foreign policy to tackle entrenched problems or simply use his star power on the world stage to shore up support at home.

“Basking in not being Bolsonaro will get him lots of positive attention in itself,” said Hamilton, whose last post, until April, was as consul general in Rio. “The more ambitious path would involve trying to help resolve some of the toughest political issues where democratic governments in the region are in trouble or extinguished.”

One response to “With Bolsonaro Tamed in Defeat, Brazil Steps Back From Brink”