The Life and Legacy of Ricardo Flores Magón (OPINION) 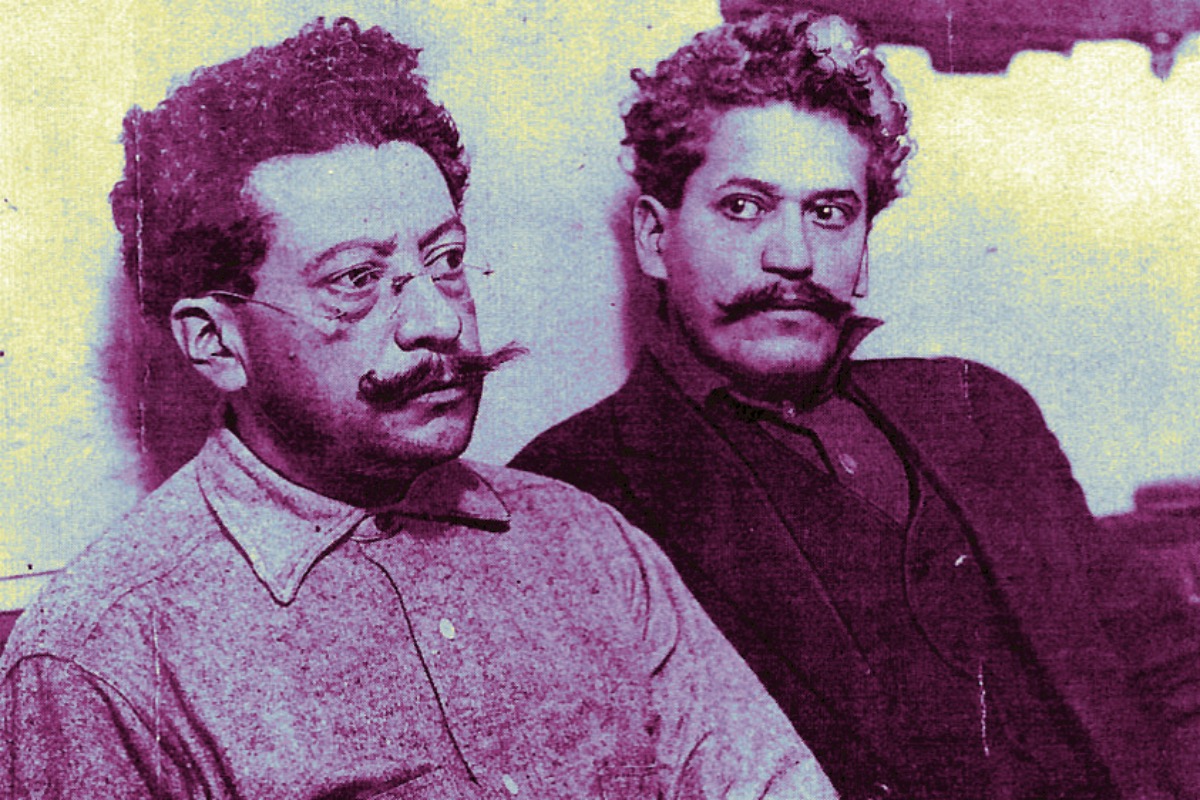 A hundred years ago today —November 21, 1922— the life of Mexican revolutionary Ricardo Flores Magón was extinguished at the age of 48. He was assassinated* while serving a 22-year sentence at the U.S. federal prison in Leavenworth, Kansas. In 1918, he, his brother Enrique and their associate Librado Rivera had been arrested in Los Angeles, tried, and convicted on trumped-up charges under the draconian 1917 Espionage and Sedition Acts.

They were victims of the brutal raids of the First Red Scare, a period during and after World War I in which authorities looked to suppress the anti-imperialist peace movement and the radical wing of the U.S. labor movement led by the Industrial Workers of the World (IWW)—both of which Flores Magón supported in the pages of the newspaper Regeneración, the official organ of his Partido Liberal Mexicano and edited by older brother Jesús.

Flores Magón and his comrades exposed for the first time to Mexican readers, both in the U.S. and in Mexico, the appalling conditions of industrial workers in the United States, mostly European immigrants. It was also the first time anyone exposed and denounced the extreme exploitation of Mexican immigrants laboring in the mines, the railroads, and the fields of the Southwest, as well as the marginalization of Mexican-American communities, sometimes called “Juan Crow” for the systemic disenfranchisement experienced by Black Americans at the same time.

All this agitation and solidarity with the Mexican diaspora and European ethnic communities on the U.S. side of the border was carried out by a group of exiled Mexican revolutionaries led by Flores Magón, whose original project was to overthrow the 26-year dictatorship of Porfirio Díaz and spark a political, social, and economic revolution in Mexico.

Flores Magón died just after the Mexican Revolution ended, but his ideas still reverberate on both sides of the border. His intellectual legacy in the makeup of modern Mexico is everywhere, and this is also true of all subsequent movements fought by Mexican immigrants and Chicano communities in the United States, down to the U.S. immigrant rights movement today.

In commemorating the centenary of Flores Magón’s entering the pantheon of revolutionary heroes, it is befitting that we distinguish his vision in relation to that of two other great Latin American revolutionary thinkers living around the same time: José Martí and José Carlos Mariátegui.

José Martí, the father of Cuban independence, was also an intellectual and prolific writer who envisioned, inspired, and organized the Cuban War of Independence from exile in the United States. He was killed in action in 1895, but he bequeathed to us an expansive vision of emancipation from Spanish and U.S. imperialism, not just for Cuba but for what he called “Nuestra América.”

Martí’s vision is alive in the Bolivarian project for continental integration and social emancipation that Venezuelan President Hugo Chávez launched in 1999 and labeled “Socialism for the 21st Century.” This vision spread across South America from 2000 to 2015, went into remission after 2015, and has been reinvigorated recently with a wave of electoral victories culminating with the return to power of Luiz Ignácio Lula da Silva in Brazil.

Flores Magón’s vision of North American integration was from the bottom up and remains the exact opposite of, and revolutionary alternative to, the ongoing neoliberal project for economic regional integration from the top down. His transnational, multiracial, and socialist vision ties Mexico’s diaspora to Mexico’s future and vice-versa, and the future of both to the struggles of all North American emancipatory anti-systemic social movements.

There is a third great emancipatory vision for the Americas, that of Peruvian revolutionary thinker José Carlos Mariátegui, who died in 1930 at the age of 35. Writing two years earlier, and well aware of the fruits of Zapatismo in the Mexican Revolution and the centrality of the Indigenous in the Andean world, he insisted on the primacy of the abiding Indigenous visions of collectivism and emancipation embedded and still present in the Americas for any future revolutionary project.

The theoretical synthesis and implementation of these three monumental visions, as well as that of others that emanated from the European and African legacies in the Americas, will determine whether the American hemisphere will move forward or backward, and the degree to which it will contribute to the construction of a new, more sustainable and just, post-capitalist world-system. It’s up to us to rescue and embrace them all, and somehow combine them for the next stage of our common battles to realize our common destiny.

The famous Zapatista slogans “¡Tierra y Libertad!“ and “¡La Tierra es de Quién la Trabaja!” were first proclaimed in Regeneración by Flores Magón and Librado Rivera in their 1911 manifesto, inspiring Emiliano Zapata to incorporate them months later into his historic Plan de Ayala. Zapata went on to become the greatest, most authentic revolutionary leader of the Mexican Revolution.

When all factions of the revolution finally sat down to draft the 1917 Constitution that granted new social rights to the Mexican people, including its vast Indigenous and peasant majority, the seminal ideas Flores Magón had proclaimed since 1906 finally came to fruition. Many of the key demands for social justice —first articulated by the Magonistas and subsequently embraced by the agrarian Zapatistas and the industrial workers’ movement centered in La Casa del Obrero Mundial— were incorporated and codified into Mexico’s supreme law, upon which Mexico entered into a period of social peace.

The peace generally held despite the brutal repression of various labor and student strikes from the 1950s through the 1970s. Mexico then entered into an era of increased social conflict, starting with the “dirty war” of the 1970s and ’80s against various guerrilla movements, and the Zapatista insurrection beginning in 1994 against the neoliberal North American integration project that left out the Indigenous and rural populations of Mexico.

The conflict was further aggravated in 2006 by the violence unleashed by the state and between criminal organizations calling themselves “cartels.” Migration from Mexico and Central America surged, only to encounter its criminalization and persecution in North America.

The U.S. has entered into an era of severe political polarization and social conflict as well, as its working class has been savagely dispossessed at the hands of the U.S. plutocracy and its willing political duopoly.

The vision, ideals, and revolutionary program of Flores Magón are more vital than ever throughout our entire region in chaos today. Regeneración, the combative newspaper Flores Magón helped direct, always published one step ahead of the U.S. and Mexican censors, and was amazingly ahead of its time —internationalist in its perspective, historically and theoretically informed, and uncompromisingly engaged with the social struggles of the day— an exemplary template for all anti-systemic social movements then, today, and tomorrow.

What Flores Magón and the Magonistas did, his main theoretical contribution, was to combine radical European anarchist and Marxist thinking of the time with the Indigenous collectivist and communal traditions of Mexico, producing a potent revolutionary ideology for the Mexican people that has guided generations of social activists in Mexico and the United States.

Apart from the Magonistas’ influence on Zapatismo, it has also influenced the nascent radical feminist and socialist women’s movement in Mexico and the United States. Many Magonista feminists were instrumental in shaping its vision and program of action, from its earliest period in Mexico to the Magonista clubs spread throughout the U.S. Southwest, which by 1911 had articulated an in-depth critique of the oppression of women under capitalism. Mujeres magonistas participated in many of the labor strikes and armed insurrections, too, resulting in many being jailed, beaten, and even killed for their efforts—for instance, Concepción Valdés, sisters Otilia and Eulalia Martínez Núñez, Josefa Arjona de Pinelo, and Josefa Tolentino.

Ricardo Flores Magón and his Magonista compañeros y compañeras left behind a legacy of uncompromising commitment to revolutionary change, theoretical clarity,  internationalist solidarity across borders, defense of Indigenous forms of autonomous and communal living, and unswervingly advocacy of all struggles for social justice in the world—across all nationalities, races and genders.

*Editor’s note: The true cause of Flores Magón’s death is disputed.

Gonzalo Santos is a long-time activist and scholar at California State University, Bakersfield, where he teaches sociology and is a faculty advisor of the group United Now for Immigrant Rights.