UPDATE: As of Thursday afternoon, October 18, Longoria has tweeted out an apology.

You would think that after retweeting and deleting a tasteless prison rape tweet when describing the debate between Vice President Joe Biden and Congressman Paul Ryan, Obama for America national campaign co-chair and actress/activist Eva Longoria would have learned that it is always better to pause before you tweet or RT.

Here is the sequence of the tweets that led to Longoria's account deleting another tweet. First off @imnotyuri tweeted this out: 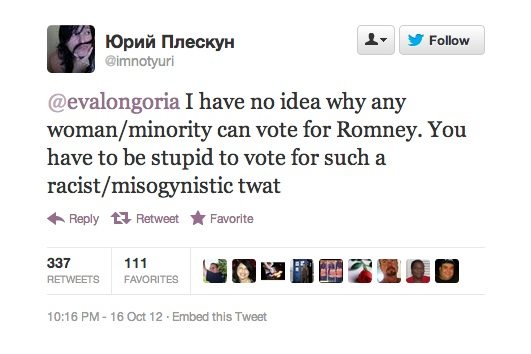 After that RT, another profile called out Longoria for RTing the original tweet from @imnotyuri: 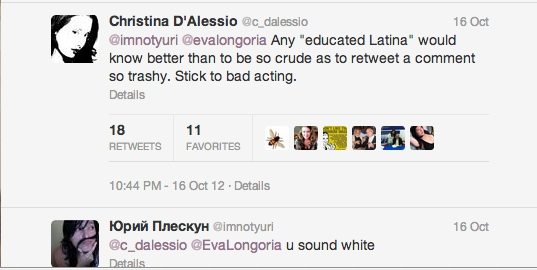 The Examiner also ran a rather grainy screen capture of the RT from Longoria's feed: 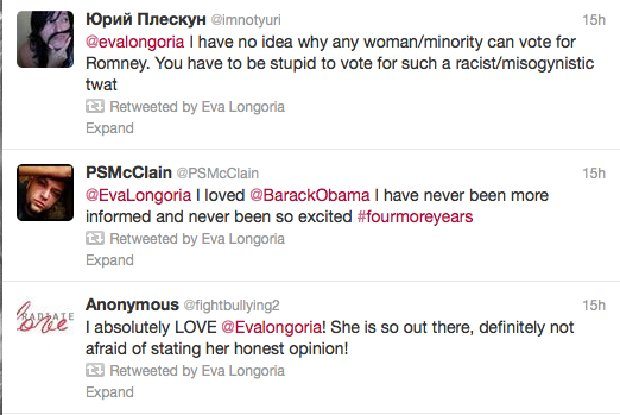 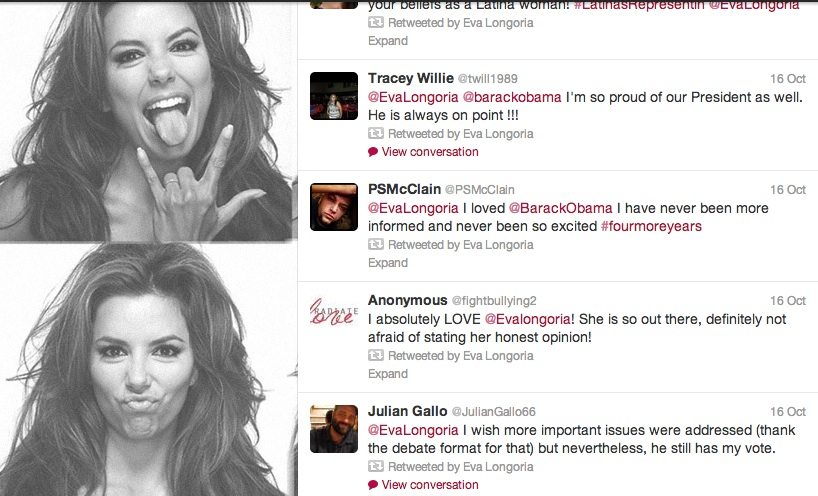 Now, we know that EVERYONE is free to his or her own opinion, and everyone is free to express that opinion in any way he or she wants. But when you are in a highly public position (national co-chair for a major presidential candidate) and you also have millions of Twitter followers, you need to be careful. You would think that some positions and titles still follow certain standards, and those standards transfer to social media. And yes, we actually think that Romney does have issues that come across as misogynist and racist to many, but we aren't representing a political campaign. There are better ways to behave when you are officially working on a campaign, and unfortunately, Longoria's social media blunders are not the way you do it.

It also perplexes us that Longoria's Twitter account doesn't even take a moment to just tweet out apologies. Instead, there is this thought that if you delete a tweet, no one will notice. Which brings us back to our first point: when you are highly visible, you will get noticed. You will ALWAYS get noticed.

“Your social media accounts are now considered an extension of yourself, so you need to be mindful of what you say and share,” says Carlos Macías, social media manager at d expósito & Partners, a multicultural communications agency.

Macías says the golden rule is to think before you tweet, and not to tweet first and then think about what you just said or endorsed. “To make matters worst, deleting a controversial tweet, like Eva Longoria this time, is more harmful than retracting or apologizing for your mistake,” Macías says.

Finally, by not apologizing or using social media to just admit you messed up (twice), it allows for your critics to continue to circle the wagons and you lose control of the story. Maybe Longoria doesn't really care about this, and maybe she thinks this is all a non-issue. But we do think that her tweets and her deletions of the tweets send out the wrong message to many people who have long admired Longoria for her accomplishments. Does raising the bar matter to Longoria all the time or just when she is not on Twitter watching debates? Our advice? Just walk away from the smart phone during the Twitter frenzy that can occur during key moments in the election cycle. Turn it off and don't tweet.

Hey, it's one thing for any Twitter profile to get vulgar (we have been known to do it ourselves, hell, one of our hashtags is called #NoMames), it's another thing when a national campaign co-chair does it (twice) and hasn't shown any humility in just saying that you are sorry for it. Deleting tweets do not count. You can't hide something that you have already made public. It is a hard lesson many of us still have to learn as social media becomes more and more prevalent in our lives. Macías is right: thinking before tweeting should be the golden rule we should all follow.