Remember the Taco Cid racist t-shirt and the restaurant’s #NoMames video explanation that went viral on the Internet? Well, looks like some people are taking action. According to the Palmetto Public Record in South Carolina, a group called Alianza Latina has filed a formal complaint with the South Carolina Human Affairs Commission “claiming that the shirts violate the state’s Human Affairs Law,” which states “that all people are entitled to the full and equal enjoyment of goods and services and public accommodations, including restaurants, ‘without discrimination or segregation on the ground of race, color, religion or national origin.'” 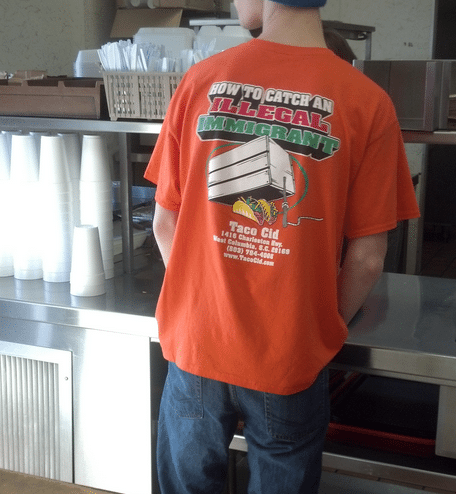 A statement by Alianza Latina on Tuesday said that shirt’s intent was to “compare Hispanics/Latinos and especially Mexicans to animals who need to be trapped.”

“We call on all residents of this and other communities, to denounce the imagery and language used in the T-shirts and to stop patronizing with a boycott against Taco Cid, as a strong statement that degrading people’s dignity will not be tolerated. The messages being spread by Taco Cid are insulting to all people in our community, and must be strongly denounced until they issue an apology and discontinue selling and wearing the degrading T-shirts.”

The article also said that Taco Cid owner Leanne Snelgrove has changed her tune from her initial comments and initial video interview (see below), saying that she can understand that the shirt might ne offensive to some, although, according to the story, “she continued to refuse to apologize for the shirts.”

Here is what else she said, according to the article:

“I still hold strong to the fact that our shirts are not racist towards any one ethnic group(s),” Snelgrove commented. “And I strongly believe we all have the right to express ourselves. It’s our constitutional right to freedom of expression, belief and right to free speech.”

“I am a young business woman who wanted to own a Mexican restaurant, because I LOVE Mexican food,” she added. “So how can I be racist against a culture that I work hard to prepare food like?”

Snelgrove had gone on record previously, just days after news of the shirt spread. This is a segment of an interview she gave at that time.

According to the HuffPost, sales of the shirt have been quite successful, especially among Border Patrol agents in Texas.