Here is one video chronicling the protest against the demolition of a field house at Whittier Elementary school in Chicago.

Like a repeat of Meigs Field, construction crews came to Whittier Elementary school on Chicago’s South Side and under the cover of night to start demolition on a beloved field house the school district had previously promised to preserve.

Wrecking crews surprised a class of dance students and ordered them out of the building around 6 p.m. Friday night, according to DNAinfo Chicago, pushing through with demolition amid protests and some 10 arrests.

The Whittier Elementary School fieldhouse, affectionately know as “La Casita” in the Pilsen neighborhood, was at the heart of a highly-publicized sit-in in 2010 during which families occupied the building for 43 days to prevent demolition.

Social media has shared several updates about the protests. The following image, taken by Tracy Barrientos, shows a father’s direct action against a demolition truck: 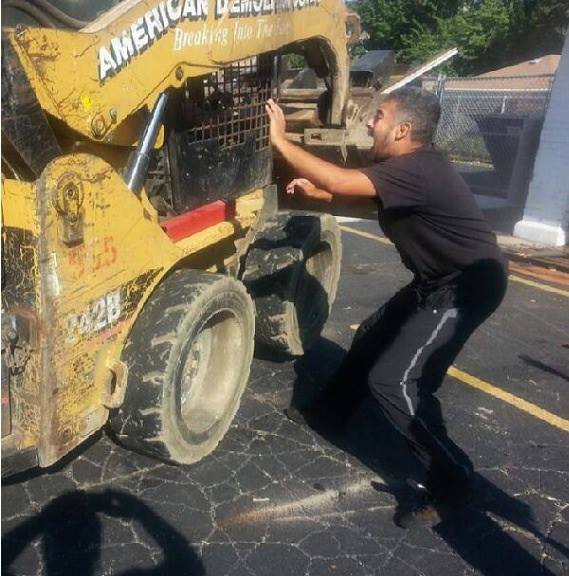 Parents and organizers complained that Chicago Public Schools, which owns the building, gave no prior notice of plans to raze it. Activists thought they had won a reprieve Friday night, when CPS agreed to meet with them Saturday morning. Ald. Danny Solis (25th) said late Friday on his Facebook page he would attend the meeting as well.

But that meeting never happened. A CPS spokeswoman said the Whittier Parents Committee declined the district’s offer to meet. Parents said CPS would only host the meeting away from La Casita — in the Ogden district police station.

Ald. Solis, meanwhile, did not appear at a planned event at Benito Juarez Academy. No one answered the phone at his ward office, and an ABC7 reporter tweeted she was told Solis was out of town and would not be commenting. A spokesperson, however, later sent a statement in which Solis said he learned the fieldhouse was “no longer safe,” and said he is “committed  to working with CPS and the Whittier community to continue improvements at Whittier.”

“He just destroyed a public library. He could have stepped up like he did last time and stopped it if he really wanted to,” said Gema Gaete, 38, a community activist who attempted to set up a meeting with CPS.

“I think they’re going to move ahead and get all of this accomplished today,” said former Whittier teacher Noreen Guetkanst, 58, before crews razed the building. “It’s so sneaky and underhanded and dishonest.”

About 6 a.m. Saturday, activists demanded to see work orders, forcing construction workers to leave to retrieve them. The protesters then blocked an alley and the main entrance so that construction vehicles could not access the site. Shortly after 9 a.m., a bulldozer drove through the fence surrounding it, allowing workers and equipment to enter.

Activists then rushed the building, linking arms trying to prevent the demolition. Police said 10 people were arrested. Nine are expected to be charged with criminal trespass and one for criminal damage to property.

The fieldhouse, which became a community center called La Casita, was occupied with students learning Aztec dance Friday evening, when CPS representatives arrived, explaining the building was due to be razed and telling them to leave, witnesses said. At least three people were arrested, according to protesters.

At the protest’s peak, as many as 200 people stood outside the Whittier property, 1900 W. 23rd St., which was fenced off and guarded by Chicago police officers. Protestors claimed CPS staff arrived with no prior notice. One said it reminded him of Mayor Richard M. Daley’s demolition of Meigs Field.

Click here for a Storify we did last night.