Will the Common Core Standards Benefit Students of Color?

In his State of the Union address last month, President Obama declared that he wants to develop “new ways to measure how well our kids think, not how well they can fill in a bubble on a test.” He was referring to the new Common Core standards that are being implemented in states all across the country, and to the new mode of teaching that the standards dictate. Rather than focusing on facts in order to perform on tests, the Common Core outlines standards that value critical-thinking skills over rote memorization.

There has been much heated debate over the past year as some states have begun to implement curricula aligned with the Common Core, with some already even assessing students on their proficiency to these new standards.  Most notably, this past year, New York assessed its student population and found that a dismal two-thirds of its students did not meet proficiency.  Significantly, students of color, especially English language learners, fared even worse than the general trend of students. While overall 31% of students exceeded the proficiency standard in either English-Language Arts or Math, only 17% of Latino students and 3.2% of English language learners did so. As a result, New York state teachers have issued a vote of “no confidence” when it comes to the Common Core.

These statistics offer a sobering truth for the state of our current educational system, one which has not ranked among the top countries for at least the last five years, according to data gathered from The Program for International Student Assessment (PISA). And within this lagging educational climate, students of color are the ones who suffer most from ineffective policy and instruction. The case of New York is not unique, as students of color across the country lag significantly behind their White counterparts.

For some, there is hope in the new Common Core standards. They view them as a measure of accountability by which to raise the expectations of these students, and offer them a critical education which has been absent from communities of color. Rather than offering these students watered-down courses or technical training, they can be given the critical-thinking and rigorous curriculum that one comes to expect from a college education. And indeed, those who helped to create the new standards have an incentive to tailor these standards to students of color.

Latino students are quickly on their way to becoming the majority of the public school population, with English Language Learners comprising an increasing number of these students. Officials and policymakers agree that the economy is changing, that new skills are needed for a future in which technology and innovation are advancing rapidly. Therefore, it only makes sense to train these students to the types of skills necessary for the jobs that will be available in the future. If students of color are going to be the labor pool available, they need to be provided with the requisite education for these skills. Enter the Common Core standards.

Not everyone is on board with this vision, however. Many Republican politicians and policy officials view the standards as an overreach of the federal government, and believe strongly that states should continue to be given the freedom to create their own standards.  “The local school boards no longer have control over our schools,” said Erick Bennett, who is spearheading an effort to collect signatures to potentially prevent the standards from being implemented in Maine. While some would argue that the federal government does not explicitly endorse any set curricula, states feel pressure to tailor their curriculum to the Common Core to meet incentives for federal funds.

It is not only the right that is against these standards, though. Critics from the left, such as education activist Diane Ravitch, have also voiced their displeasure with the new standards. They call them an unattainable goal for struggling students and a continuation of a culture of testing that already demoralizes and inhibits, rather than promotes, a quality education. Last year, Ravitch stated, “We’re using a very inappropriate standard that’s way too high.” 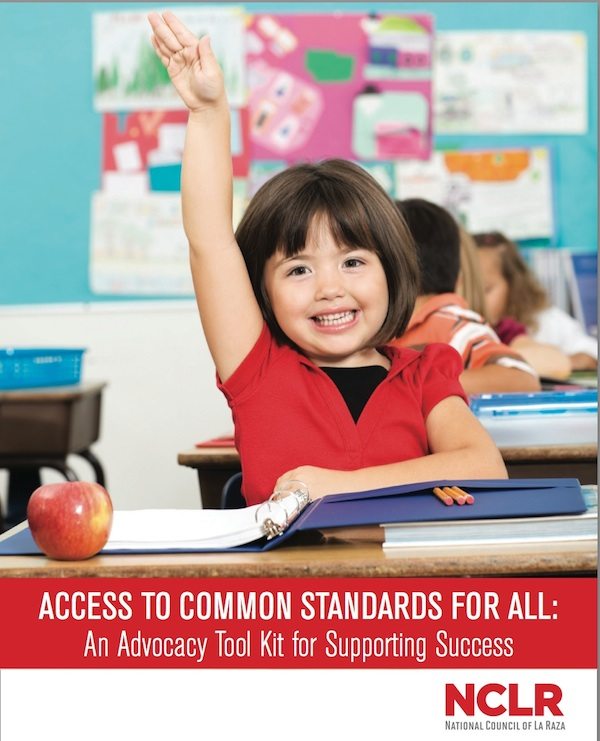 For its part, the National Council of La Raza (NCLR) created an implementation guide as a support tool for schools and districts interested in addressing the needs of Latino students in this transition to the Common Core.  In the guide, they outline suggestions and possible steps that can be taken to address different issues, from securing funds to retrain teachers to determining whether or not existing curriculum can be modified to align with the new standards. Despite the efforts of organizations like NCLR, a number of issues have indeed materialized with implementing the Common Core, including an insufficient appropriation of funds to retrain teachers through professional development or to develop teaching programs to train new teachers towards new instruction methods.  Some states have gone as far as delaying funds to school districts, resulting in a lack of infrastructure necessary to implement the new standards.

Overall, there are varying issues at hand with implementing the Common Core standards, and in the middle of the debate students of color are often overlooked. Whatever the implementation process ends becoming, and the degree to which the new assessments move away from the high-stakes culture of the past, the students will be the ones most affected. Hopefully, the Common Core gets implemented successfully and students of color are able to close the achievement gap substantially. Then, maybe, when they are assessed as to “how well they think,” people can see that they think quite well, and actually always did, had they been given the chance.

Frank Salcedo is a freelance writer who focuses on education. He currently develops curriculum for a non-profit Mexican-American cultural institution in Los Angeles, California.

One response to “Will the Common Core Standards Benefit Students of Color?”