UPDATE, March 4, 2014: People who questioned the validity of the photo need to know that it is real. El Nuevo Herald in Miami also published it in a photo gallery by Chilean photographer Orlando Barría. 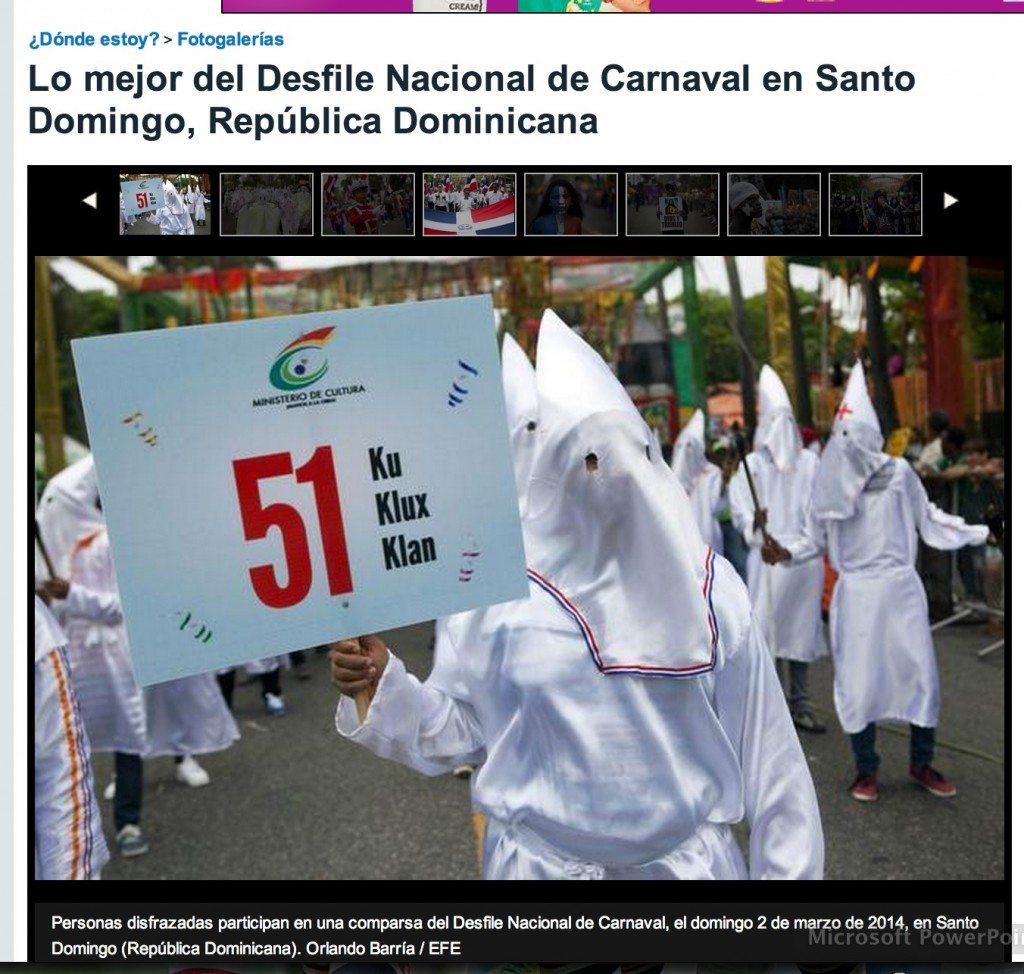 This year’s Dominican Carnival concluded yesterday in the capital city of Santo Domingo. It featured 180 processions, representing the 31 provinces of the Dominican Republic.

While traditional costumes usually display an array of color, a procession this year featured people in white robes—KKK robes.

The Dominican website 7días shared a photo today on Twitter of people dressed in robes and pointed head pieces, marching with a sign that said “Ku Klux Klan” along with the logo of the country’s Ministry of Culture.

This is the image it shared. 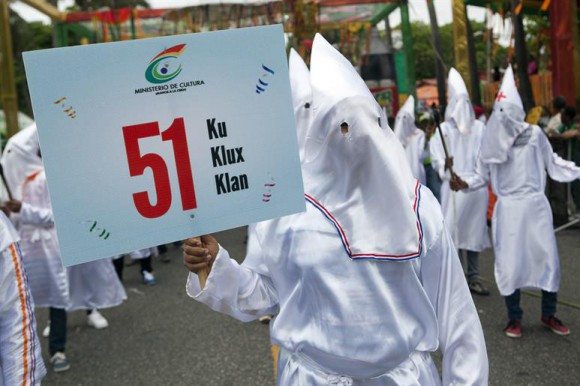 While the procession surprised spectators in the capital city, 7días said this wasn’t the first time people dressed in KKK attire took part in Carnival festivities. A similar procession marched a few years ago in the city of Santiago.

A statement released by the Ministry of Culture on February 25 saus Carnival is the country’s “most important representation of popular culture,” explaining that “carnivals are spaces for creativity, liberty, and imagination.

Nonetheless, each Carnival procession must be approved by the Ministry of Culture. How are KKK robes representative of Dominican culture? Who thought this was appropriate?

After sharing the photo, 7días received a tweet stating that they shouldn’t turn this photo into “absurd news.”

“The members of the procession don’t offer homage or praise to the costume they wear. Let’s not be idiots,” said the tweet.

The photo caused an immediate uproar from social media, denouncing it as everything from the horrible to the ridiculous—with very few comments saying people were overreacting. One tweet in Spanish aptly summed up the reaction: “It is a national disgrace to have a group that promotes racism and hate like the KKK in the Carnival.”

As you can imagine, many Dominican Americans were in shock.

@marysuerenfrow omg they look brown under those costumes. I give up. im done with everyone, with 2014, just…

Still, seeing black members in the KKK isn’t something unheard of — NPR even featured a segment of how a black police officer joined in 2006. However, the meaning of the KKK isn’t a subject taught in schools across the Dominican Republic and is scarcely mentioned in Dominican media.

Some questioned if the procession was meant to be funny, considering that Carnival includes demonstrations of dark humor.

Santiago Rosario commented on Facebook, “I believe this was meant to ridicule the group (because) processions sometimes represent people or events that have affected us and represent them as satire.”

However, unlike the KKK group, the Wesolowski procession made it clear that it was a demonstration of criticism rather than praise by carrying signs that called the Archbishop a “pedophile” and “abuser.”

If the KKK procession was meant to be humorous or satirical, it obviously failed.

American by birth, Mexican by blood, and curious by nature, Iris Estrada is a bilingual freelance writer looking to shine light on social injustices, celebrate notable triumphs, and help educate the misinformed. You can follow her on Twitter at @Iris_Estrada.