Why Slate’s Piece About Latinos Becoming the Next Whites Failed

In a United States that is becoming more diverse every day, new questions about race, ethnicity and identity regularly appear in mainstream publications and discussions. Central to these debates is the country’s growing Latino population. These days, it seems every editorial outlet in the country has to write about Latinos (demographics! advertising!), even when those outlets’ Latino representation is grossly underrepresented or virtually non-existent.

Such is the case of Slate, a magazine that has been around since 1996. Now, I am not going to get into an analysis about how many Latinos have written for the magazine, but let’s be honest: Slate is not the publication that immediately comes to mind when you are looking for news content that accurately and authentically reflects what is it to be a US Latino today. Even when Slate has tried to address issues of Latino identity, it has always been from the perspective of the outsider looking in. It is safe to say that Slate has never been one to focus on drawing in more Latino readers, but apparently now that being Latino is “hot,” they seem to be trying.

If yesterday’s “Will Today’s Hispanics Be Tomorrow’s Whites?” opinion piece by Jamelle Bouie is the editorial direction Slate chose, it has already failed.

In fairness, Bouie —who tweeted with me last night after I called the Slate piece perhaps the dumbest thing the magazine has ever published— did base his piece on a very interesting question: will the current concept of “whiteness” change as the US becomes more and more Latino? (Sidenote: Bouie and Slate kept using “Hispanic” in the piece, an early indication that the piece was already going to miss the mark.) That question has merit, and I applaud him for asking it. Still, how Bouie (and his Slate editors) executed his thesis is what troubled me the most.

I ask a simple question: if you are a Latino on Twitter or Facebook and you see a “Will Today’s Hispanics Be Tomorrow’s Whites?” headline, what would your reaction be?

Mine instantly took me here:

The headline —even though it successfully caused me to click on the link— quite frankly, was offensive. The use of “will” at the beginning of the question implied that this was a prediction that would eventually happen. Nothing could stop it. Following this logic, think about it: white = racist against Blacks, Hispanics could become the next whites, so therefore Hispanic = white, which means that Hispanic = racist against Blacks. Why such a sweeping generalization? Why not just say “will some Hispanics” and move along?

Did Bouie agree to such a headline? And before he makes the typical claim that a writer has no control over the headlines to the pieces he writes, as someone who has written for several national publications and also edited for major news organizations, I have always submitted a headline with my piece. If my editors don’t like the headlines, they let me know, and we try to come up with another one. So the Slate headline alone indicates that the piece was indeed “going there.” And I wasn’t liking it.

Now, if you get past the headline as well as the subhead, “How Hispanics perceive themselves may shape the future of race in America” (cue dramatic music), the next element you see is a photo: 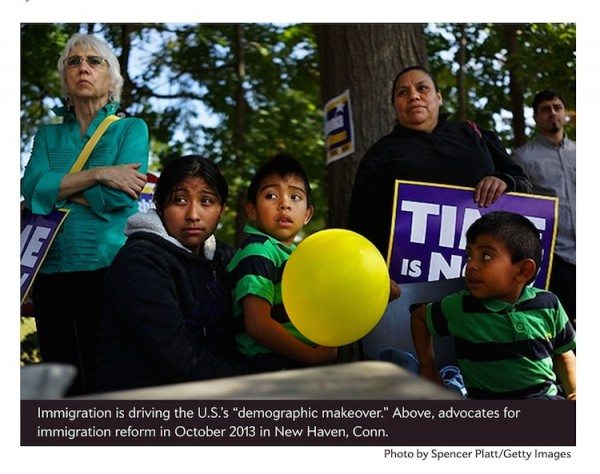 This is just editorial sloppiness.

A piece about how Hispanics will become the country’s future whites, and the first thing you see is that of four brown-skinned people at an immigration rally? I don’t know if the people in this picture are Latino or not (maybe that “white” lady on the left is Latina too), but these are “tomorrow’s whites?”

Tell that to people who have been racially profiled in Arizona or have been deported from their families. “Tomorrow’s whites” wouldn’t be fighting to fix an immigration system that disproportionately targets those from Central American and Latin American countries. For example, a enforcement-heavy system that removed in 2013 alone over 240,000 Mexicans, more than 47,000 Guatemalans, a little over 37,000 Hondurans and about 21,500 Salvadorans. And we now know that a majority of those removals weren’t even necessary. Juan Crow is alive and well in 21st century America.

Yes, that’s Bouie’s intro. Not only is he asking if Hispanics will become “tomorrow’s whites,” but his writing implies that Latinos will just become a bunch of Zimmermans. Cue up the Gollum video.

I will say this once and only once: some Latinos are racist, and Latin America has perpetuated an institutionalized form of racism for centuries. That system is finally being exposed, slowly but surely. Latino Rebels even wrote a very detailed piece when the whole “white Hispanic” issue dominated the case.

But let me answer Bouie’s point directly. Here is how he began his piece about Hispanics and whiteness:

The Trayvon Martin shooting was hardly in the national consciousness before fault lines emerged around the case. Was Martin as innocent as he seemed? Did Zimmerman fear for his life? Did Martin provoke the incident? Was Zimmerman a racist?

Perhaps most controversial among all of these was the question of identity. Yes, Trayvon Martin was black, but is Zimmerman white? For Martin’s sympathizers, the answer was yes. For Zimmerman’s, the answers ranged from “it doesn’t matter” to he “is actually a Hispanic nonracist person who acted in self-defense.”

Remember: anti-blackness in Latin American countries is still pretty raw and has a long ugly history. When I heard that Zimmerman was half Peruvian, I didn’t even blink or think that Zimmerman’s initial reactions weren’t racially motivated. They were, and almost every Latino I know who saw the death of a young black boy as a national tragedy would say the same.

Bouie’s introduction suggested that Latinos wouldn’t be sympathetic to a Trayvon because in the end, we just all want to be white. Guess Bouie forgot to mention that when it comes to what two groups share most in common when it comes to securing better futures, those two groups are young black and Latino men. Or that when Univision has Zimmerman on TV earlier this year, there was pure outrage.

And for every Trayvon, there is also an Andy Lopez. Or a David Sal Silva. Or a Jesús Huerta. “Tomorrow’s whites” don’t die in police custody on a regular basis.

I am getting really frustrated with non #Latinos theorizing about Latino racialization. And not consulting/coauthors w Latinos. #latism

.@MsJamilaAisha I’m cool with that and read the piece. But then he should have spoken from that fear. Be honest. Not speak over it.

@BlancaVNYC that’s my point of contention w/ it. but slate fell into the troupe of all pocs can write on pocs topics by having him do it.

.@MsJamilaAisha very disappointing. All day today I have been reading tweets abt Latino racialization and not one have been from Latinos.

.@MsJamilaAisha right … in fact what @jbouie fails to realize is that race in US will actually look a lot more like race in LatinAmerica

@BlancaVNYC it will, but people in this country don’t understand LatAm’s diversity at all. I know this firsthand.

.@MsJamilaAisha but the author should have done more work. Go to twitter for Christ’a sake. I’m just frustrated w this piece.

@BlancaVNYC also i can see his train of thought cuz i’ve encountered it so many times. even on boards for afro-latin@ orgs w/ a-a & latin@s

.@MsJamilaAisha but that perspective is SO much more honest than what he is writing. You’re saying what he should have said.

By the way, they also plan to write a rebuttal to Bouie’s piece.

By now, I am at the point where I should actively petition every editorial outlet in the country to sign the following: We promise to never ever portray US Latinos with broad sweeping generalizations without talking with actual Latinos who know the issues. I doubt that in this “Latino is the new white” debate, Bouie and other writers could even begin to fully understand that Latino identity means something different to different people. To some, it means celebration of a common culture, language and experience. To others, it means a complete rejection of a contrived government-created label (Hispanic, Latino) that ignores proud indigenous roots. Add the the fact that we’re talking over 20 countries here, and the conclusions about Latinos by non-Latino gets messy.

I guess Bouie never really knew that some of us Latinos think Louis CK is the greatest Mexican stand-up comic around, which would already refute the fact that Latinos are just striving for “whiteness.”

That video actually complements my final point, but first let me call up Bouie’s concluding lament:

Our hierarchies are a little flatter, and—in public life, at least—we aren’t as obsessed with racial boundaries. But both still exist, and they take a familiar form: whites at the top, blacks at the bottom. The future could make a collection of minorities the majority in America, or it could broaden our definition of white, leaving us with a remix of the black-and-white binary. A country where some white people are Asian, some are Hispanic, and the dark-skinned citizens of America—and blacks especially—is still a world apart.

I have greater faith in Latinos than Bouie does.

Too bad Slate (and Bouie) never took the time to bring in a more nuance to this debate. Having been in a room where I was the only Puerto Rican in a room of “whites,” the one with the foreign name who “speaks English so well,” the one whose family goes back to places as diverse as North Africa and the Canary Islands, the little spic from the Bronx, Latino identity is about pride for who you are and never forgetting where you come from. My family is literally a rainbow of races, but we also have a bond that culturally unites us. It is this bond that keeps growing as Latinos get more and more connected online. The Latinos I know refuse to be boxed into other’s paranoid paradigms.

So why did Bouie even ask the question about whether Hispanic will become “tomorrow’s whites”?

Sure, there are some Latinos who will be “tomorrow’s whites.” However, from where I stand, that number is insignificant, just like other people of color striving for “whiteness.”

Hopefully Bouie and Slate do start listening more to what Latinos are saying, and even reading some of the comments being posted on the piece:

My Hispanic colleague commented on this issue and said:

“How can we ever be white. Maybe a few of the light skin ones could ‘pass’, but we [hispanics] suffer the same prejudice on our looks. We are short and brown. When I walk into a room full of Whites of European descent, I and everyone in there knows I am not one of them.”

“Everyone in there knows I am not one of them.”

EDITOR’S NOTE: Julio (Julito) Ricardo Varela (@julito77) founded LatinoRebels.com in May, 2011 and proceeded to open it up to about 20 like-minded Rebeldes. His personal blog, juliorvarela.com, has been active since 2008 and is widely read in Puerto Rico and beyond. He pens columns on LR regularly. In the last two years, Julito represented the Rebeldes on CBS’ Face the Nation, NPR,  Univision, and The New York Times. Recently, he was a digital producer for Al Jazeera America’s The Stream.