UPDATE: August 4, 9:15ET: A local El Paso report shows images of what appear to be rifles or automatic weapons.

Earlier today a story in The Guardian reported that an eight-day Border Convoy to “Stop the Invasion” was canceling its El Paso rally due to unspecified “death threats.” Apparently, what Border Convoy organizers told The Guardian wasn’t 100% accurate as more details began to emerge. 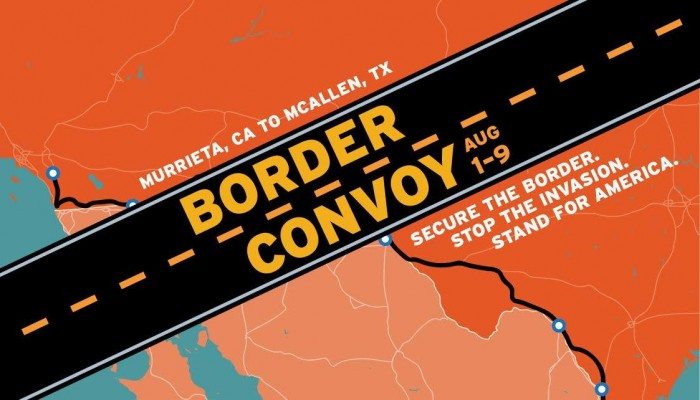 A tweet by The El Paso Times said the following:

The local Univision station in El Paso also reported similar information in Spanish, saying that members of the Border Convoy were arriving in El Paso with firearms and threatening people:

Eventually the Border Convoy left El Paso, but not before traffic at I-10 was at a standstill.

When we tweeted Border Convoy about the incident, we got the following tweet:

@latinorebels @ElTejanoVive we were just run off the interstate. That’s the answer you’re going to get.

We followed up with these questions, which we got from local sources:

@borderconvoy so #ElPaso police were wrong about an alleged gun threat? @ElTejanoVive

@borderconvoy two more questions: 1) Are you carrying rifles and/or guns? 2) Did anyone in your group make a gun threat?

@borderconvoy we have people on the ground who say that someone in your group pointed a rifle at people? true or no?

Border Convoy did not respond to us specifically but it is not being quite active on its Facebook. Here is what it has posted in the last hour:

Ok, so here is a status update for those that are saying we are not committed and backed down from “threats.” What happened was late last night we received word that an “organization” was planning on confronting us with force. The threats became more severe this morning, due to the security risk we told the media we would not go to El Paso with the intention of throwing off the opposition. If you read our last post you will find that we have in fact been in El Paso today. On our way to a undisclosed location we noticed spotters waiting for us on side streets and on the freeway. The spotters attempted to run us off of the road on the 10 freeway causing the entire east bound lane to be shut down for over an 30 mins, we remained stopped for over an hour. As the situation unraveled a few things became clear to not only us, but El Paso PD as well. We were set up by a group of “human rights activists” attempting to force us off the road, Univision was on location within 45 seconds of us being stopped and there were “pro-invasion” protesters waiting off of the freeway with signs. The opposition had already called the police before they tried to run us off the road, this was obvious as approximately 10-12 units were on scene in roughly 1 minute. The women in the black Toyota Tacoma that called the police before we were even stopped on the freeway claimed that a someone had threatened her. However, her story immediately unraveled as it became clear to PD they had set a trap for us. We were given multiple case numbers in regards to the criminal charges being filed against the opposition, including one for reckless driving. This incident is exactly why we told the media we were not stopping in El Paso, we were trying to avoid a potentially dangerous conflict as we are a peaceful convoy. Furthermore, for those us are now stating we are not “committed” to the cause, are “backing down” and are “on our knees” I say the following… Please know we take threats such as this very seriously. Everyone on this convoy has put themselves directly in harms way for the greater good of this nation. The scenario we just came out if was shockingly dangerous but we’re all ok. Please do not judge us based on what media who know nothing about the truth tell you. To those of you who have wished us well and voiced your concern for our safety, God bless and thank you, you are the reason we are fighting this battle.

The convoy continues on and we have much more to see! More updates to follow!

The post refers to this video segment, which we captured off a live stream:

That video also needs to be seen with this live stream, which shows why El Paso PD showed up. The police officer said that someone in the Border Convoy threatened a person with a gun:

Before the longer post by Border Convoy, it also posted this:

Just so everyone knows what is happening in El Paso, we were ambushed and setup by pro-invasion individuals who tried to run us off the road. We’re currently working with the 20 or so officers here to resolve the unwanted conflict and be on our way. Everyone is safe.

Here is what else it posted later tonight, just minutes after saying that it was being trapped in El Paso:

We would also like to thank El Paso PD for their expert handling of the situation and for helping our convoy safely get on our way without any further threat.

UPDATE: The El Paso Times published its story late tonight. Here is an excerpt about what Border Convoy said about the alleged gun threat:

Members of the Border Convoy denied the allegation, saying it was the group that had been the target of an online threat.

Identifying itself on its website as a coalition of citizens concerned over the “invasion” at the border, the convoy cancelled two El Paso stops because of alleged threats they received via Facebook, organizer Eric Odom said.

The Border Conoy has been streaming their nine-day tour from Murrieta, Calif., to McAllen, Texas, on their website.

“We have the entire thing on video… That never happened,” Odom told the El Paso Times about the alleged gun threat.

When asked if anyone in the convoy was carrying weapons, Odom said that they had a legal right to carry a weapon for protection.

“But as you can see, there’s soccer moms with American flags (on the convoy). That’s why they are going to let us go,” Odom said.

Border Convoy pulled over after activists following the convoy claim they pointed a rifle at them. No arrests. pic.twitter.com/CijM1QjfJJ