Latinos and the Resentment Toward Whites

Back in 2010, Arizona’s education chief John Huppenthal ordered Tuscon’s school district to remove Mexican American Studies courses from its curriculum or lose 10 percent of its funding. This came after an audit commissioned by Huppenthal himself that recommended the program on the basis of, among other things, its promotion of critical thinking. Huppenthal and his Republican pals, however, believed Mexican American Studies achieved something else: encouraging “ethnic solidarity” and inspiring resentment toward whites. In response to the threat, the school district banned seven books, among them Rudolfo Acuña’s Occupied America and Paulo Freire’s Pedagogy of the Oppressed.

As Roque Planas reports over at the Huffington Post, superintendent Huppenthal lost his reelection bid in a Republican primary on Tuesday. So now that his days are numbered as Arizona’s top teacher, I can provide Huppenthal with a bit of comfort by offering this admission: he and his bigoted buddies should have feared Mexican American Studies. 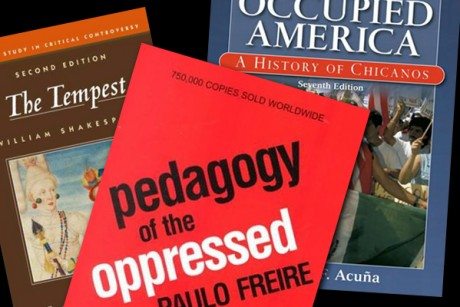 Putting aside the complexities of Latinos and identity, resentment towards whites runs deep in Latino communities. That resentment isn’t planted there just because of a Mexican American Studies course. Latinos become resentful right around the time they begin to notice that Latinos in America aren’t granted nearly as many tools and opportunities as whites. The resentment sparks the moment they see their communities in crisis while the white ones are riding high. They learn to resent white people when they’re taught that a good education is a springboard for success and realize that Latino-majority schools aren’t as good as white schools because they aren’t as funded. (I know this because I’m from Chicago.) Latinos learn to resent white people when they see their undocumented friends and family members making up a crucial part of the world’s largest economy and getting nothing in return except long hours, low pay, no benefits, terrible work conditions and, on top of all that, persecution at the hands of at least two branches of the federal government, not to mention local governments. Latinos resent white America for painting Latino children as disease-ridden criminals and turning Latino girls into exotic sexual toys by putting them on a spinning pedestal for the entire world to gawk at. A few Latino history lessons, or reading Freire, never made a Latino resentful who wasn’t already burning with resentment.

And lest we get it twisted, there’s no such thing as Latino American history, there’s only history and “story time.” The story being told to students in America’s schools every year —the story taught to me and you too, probably— is simply the annual reaffirmation of American greatness on account of its whiteness. This American myth never questions the country’s principles or ethics, whether other peoples have made (and are making) important contributions to American society, or if white people are to blame for any of the moral bankruptcy we suffer today. All we’re taught is that the Europeans brought civilization to the New World (by the sword) and spread their civilization toward the Pacific (by the rifle). Any cruelty on the part of white people is explained away: America had a right to colonize the New World and spread westward because the natives weren’t using the land to its full potential; America preserved slavery because it was a fledgling country and cotton is a labor-intensive crop (America also teaches us that she freed the black slaves, when in fact it was the black slaves who freed themselves); America took half of Mexico because it wanted half of Mexico; America kept Puerto Rico as a colony because it had been a colony under Spain and, therefore, wasn’t accustomed to democracy; the white rage unleashed during the Zoot Suit Riots was caused by young Latino men. As far as the average American is concerned, the greatest Latino contributions to American culture are Taco Bell, West Side Story, tequila shots and Jennifer Lopez.

School districts across America needn’t worry about promoting ethnic solidarity among Latinos. Latino white supremacy and America’s racial caste system both make it so the so-called Latino community hardly tolerates its own black people any more than it tolerates America’s black people. And if a Latino manages to graduate from high school, their diploma will signify that they’ve most likely been stripped of their mother tongue and don’t know enough of their heritage to appreciate what they share in common with other Latinos. Having been at least partially convinced of the inferiority of Latinos, they’ll put way more stock into their relationships with white people than they should, and they’ll even look to Americanize, which for Latinos is a euphemism for “de-Latinization.” They may live with other Latinos, go to school and church with them, but they’ll be kept so ignorant of what it actually means to be a Latino that few will ever feel any genuine solidarity with his or her people.

Huppenthal was right to ban Mexican American Studies in Tuscon, insofar as any person who wants to keep America’s racist machinery running in this country is right to oppose the teaching of its entire history. Knowledge is fatal to abusive authority. We wouldn’t want tens of millions of Latinos strolling down America’s streets knowing their true past, or that their people really aren’t backward savages like the history books depict. Endowed with dignity and respect, Latinos might start demanding that they be treated as equal citizens, with equal rights and equal opportunities. And we certainly wouldn’t want white boys and girls understanding their complicity in America’s racist system, much less teaching them how they can help change it. That would signal the end of today’s America and the beginning of a new, multiracial and multicultural society. And judging by the the number of black men being beaten and killed, plus the anti-Latino hysteria spreading like Ebola, white supremacy has no intention of loosening its chokehold on the American people.

Maintaining its authority will require perpetuating its myth.

One response to “Latinos and the Resentment Toward Whites”