This week, right before the country’s Thanksgiving break, a group of 14 U.S. Senators wrote a letter to Secretary of State John Kerry about the missing Ayotzinapa students in Mexico. 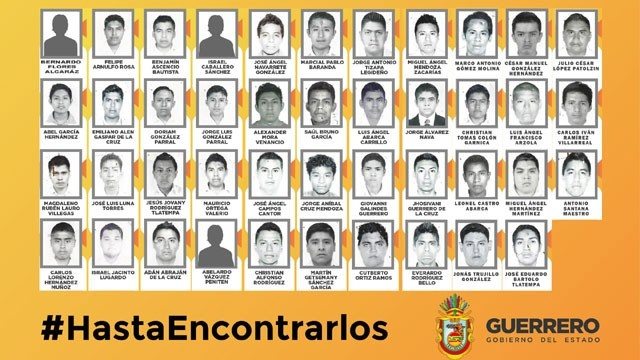 This entire letter follows below, and while the senators’ words are perhaps the most public statements made by high-profile U.S. politicians, the crux of the argument fails to even make the connection that such “drug-related violence” is a consequence of U.S. Mexico policy. In addition, the letter doesn’t criticize the government of Mexican president Enrique Peña Nieto. Instead, it almost defends the current Mexico government. The letter doesn’t even mention how several November 20 protesters in Mexico are being charged with “terrorism”. It is a letter that does very little to speak out against the root causes of the crisis, and to see that it praises Peña Nieto for making “great strides to reform Mexico’s economic and energy sectors” suggests to us the letter’s real intention. It’s no wonder organizers in the U.S. are trying to bring more attention to the real problem here: U.S. complicity in Mexico.

We write to express our profound concern for the lives of the 43 young students that disappeared on September 26th in the State of Guerrero, Mexico. After more than a month of continuous investigations by Mexican authorities, it is disconcerting that the fate of these students remains uncertain, even as mounting evidence implies that they have become the latest victims of the country’s drug-related violence.

In the midst of this crisis, we urge you to do everything possible to support the Mexican government by making additional investigative and forensic resources available to assist in locating the missing students. Even if our worst fears are confirmed, we ask that you assist the Mexican government in its efforts to bring all those responsible to justice and to ensure positive post-mortem identifications that allow families to begin their grieving and healing process.

As thousands of frustrated Mexicans gather throughout the country to protest against impunity, we are concerned that the situation in Guerrero is symptomatic of a larger issue that has been endemic to Mexico in recent years. We are deeply troubled by the reports of multiple clandestine mass graves that have been found throughout the search process. According to the Mexican Attorney General’s Office, there are more than 22,000 people who disappeared or went missing over the past decade, and who remain unaccounted for. This number constitutes one of the largest in the hemisphere and one that can’t be ignored.

At a time when President Peña Nieto has taken great strides to reform Mexico’s economic and energy sectors, it is imperative that attention also be focused on strengthening the investigative and forensic capacity of Mexican law enforcement and its ability to serve victims of crime, violence, and human rights abuses. It is critical that the United States stand in partnership with these efforts to ensure justice for the 43 young students and for the tens of thousands of Mexicans that have gone missing.

In closing, our hearts go out to the families of the missing students and we once again reiterate our request for support to our Mexican partners during this time of crisis.

Meanwhile, last night the White House emailed a readout of a call President Barack Obama had with Peña Nieto.

Readout of the President’s Call with Mexican President Peña Nieto

President Obama spoke with Mexican President Enrique Peña Nieto today regarding the President’s Executive Actions to fix our immigration system. President Obama and President Peña Nieto reaffirmed the commitment of both countries to work together in Central America to help address the underlying factors driving migration from the region to Mexico and the United States and deter migrant smuggling, including the smuggling of unaccompanied children. The two leaders discussed the importance of continuing our work through the High Level Economic Dialogue to enhance our competitiveness in the global economy. They pledged to work together to combat organized crime and promote improved security and justice for our citizens in a spirit of shared responsibility.

Not one mention of Ayotzinapa, because that’s not the narrative the U.S. government wants you to follow when it comes to Peña Nieto. Students continue to go missing in Mexico—some of them younger than college students. More and more Mexicans know that the Ayoztinapa case was yet another example of the state’s role in suppressing the voices of its own people. Fue el estado. It was the state.

But why should that matter to the United States? The senators’ letter confirms that it’s “all about the money.” It is a far cry from the forceeful words Menendez and Rubio used when it came to Venezuela last year, where the senators placed specific blame on the government of Nicolás Maduro with harsh rhetoric.

Why did the Mexico letter not reach that level?

Because in the end, the U.S. government has no interest in promoting real democracy and change in Mexico. That would upset the power structure, one that has been in place for decades. President Obama’s conversation with Peña Nieto is just another example. Ayoztinapa doesn’t matter. The thousands of missing don’t matter. A drug war that has failed miserably doesn’t matter. As a result, many are #USTired2.

One response to “14 Senators Write #Ayotzinapa Letter to Secretary Kerry, But Completely Miss the Point”