Editor’s Note: Another more condensed version of this piece was published on the author’s College USA Today page. Earlier this week, the author submitted the following article to us, and we gladly agreed to publish it.

Cristian Arcega piloted the robot into the pool. He needed to lower the ROV in the perfect angle to complete the team’s first mission. The PVC pipes that kept Stinky afloat did not make for an aesthetically superior body, but as an underwater robotics competition, success was only measured by the best of engineering. Perhaps Stinky wasn’t a great name for a robot. Perhaps competing against MIT wasn’t the best idea. Perhaps keeping a robot together with rubber glue and tampons wasn’t the way to go. Cristian didn’t care.

The 16-year-old from Arizona was far from home. UC Santa Barbara and Carl Hayden High School were miles from each other, worlds apart. In his first ever underwater robotics competition, Cristian was going head-to-head against a giant.

The Carl Hayden High School Robotics Team arrived in southern California with hopes of participating. No one expected them to win, much less to defeat one of the best private research universities in the nation.

Buy they did, and by a landslide.

Few heard the story then, and fewer still understood its social and political weight. A team of four undocumented students was not meant to upset ExxonMobil-sponsored MIT. Then again, there were plenty of things they were told not to do, like live in this country.

Long before the competition, Cristian had other things in mind.

He wanted to stay distracted, away from the constant reminder that his proximity to Mexico made him an easy target for deportation. He would rather drive a robot against MIT than drive a car and get deported. Winning in robotics did not require a license.

Cristian had lived in Arizona since the age of six when his family first moved to Stanfield, about 50 miles south of Phoenix. With an area of four square miles, its population came close to 600.

In a very hot place, the tones kept at par with the weather.

“They would call me a wetback,” he said. “Before the robotics team, I was kind of frustrated. I had a paranoia of what was really going on, but that kind of faded out.”

As a sophomore in high school, Cristian joined Carl Hayden’s robotics team by word of mouth.

Wiring robots became a routine. He was shaping up to become an engineer.

The idea for Stinky came around the third year after the club was created. By then, the team had already worked on other projects, competing in the FIRST Robotics Competition for high schools twice.

“We did research on all the parts of the robot for months. We only had one opportunity to purchase something and we couldn’t change our minds,” he said.

When the work finally paid off, the story didn’t pick up until about a year later when Wired magazine published a five-page profile on Carl Hayden’s underwater dreams.

“At that point, we thought that no one was going to pay attention to us,” he said.

No one would have hoped for a documentary then, not to mention a Hollywood production. But the unexpected became routinary, and the routinary became a lifestyle.

By then, Cristian was a junior, college-bound. He ranked at the top of his class and was focused on robotics more than anything else.

But that was also soon to change.

“Before the article came out, we had to make the decision if we wanted to be upfront about being undocumented. Back then, that wasn’t an issue that was brought up in public.”

“We could choose not to say it, and the story wouldn’t go through. So we decided to say we were undocumented and deal with the fallout later. We weren’t trying to make a statement. We saw the inclusion of the undocumented portion of the story as something we had to live with in order to get the recognition for it,” he said.

“It wasn’t until later that we realized the impact our story had on people.”

Cristian graduated second in his class and was able to attend Arizona State University on a President’s Scholarship, which was, in his case, expected.

He was enrolled at ASU for a year, until 2006, when Proposition 300 stripped him of financial aid, preventing him from staying in route towards earning a degree in Electrical Engineering.

Since, his dream has been delayed for almost a decade.

Despite receiving legal presence through a federal program known as Deferred Action for Childhood Arrivals (DACA), he must pay out-of-state tuition in order to attend school in Arizona.

He hasn’t given up, however.

Cristian has started a campaign to raise funds for college. His involvement in the robotics team at Carl Hayden has inspired the movie Spare Parts, based on the club’s performance in the 2004 competition.

The likelihood of one’s life becoming part of a motion picture is perhaps as unlikely as not being able to attend college despite graduating with the merits to do so. But then again, this is Cristian we are talking about, the same one who guided a robot named Stinky into the history books of Carl Hayden High School.

Probabilities don’t really work well on him, at least not in Arizona.

He plans to attend college this fall and bring his dreams afloat with the same heart and ingenuity that kept Stinky in the race. 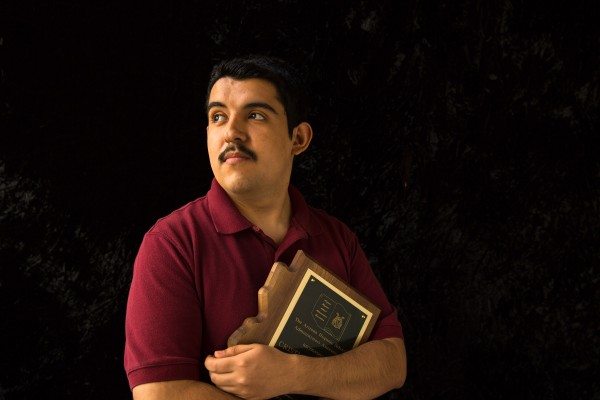 He is ready to compete amongst the best. This time, he will drive if he has to.

Rolando Zenteno was born in Chiapas, Mexico. He is majoring in English/Communications at Armstrong State University with the hopes of becoming a journalist after college. Follow him on twitter at @RolandoZenteno. You can read more of his stories here.