Deadline Hollywood and Why It’s Dead

Perhaps it was just a matter of time. Perhaps it was merely the representation of an old Hollywood system waking up to a new and cumbersome reality. Perhaps it was just pissed-off entitlement ready to take a massive media White Flight. Whatever it was, earlier this week Deadline marked its official and unequivocal demise as a source of anything valid. Yes, with a stroke of a few ridiculously backward paragraphs, and veiled and not so veiled reverse racism at its finest, Deadline TV editor Nellie Andreeva made sure that the Hollywood portal looked as dated and as zombie-like as the WordPress website it sits on. 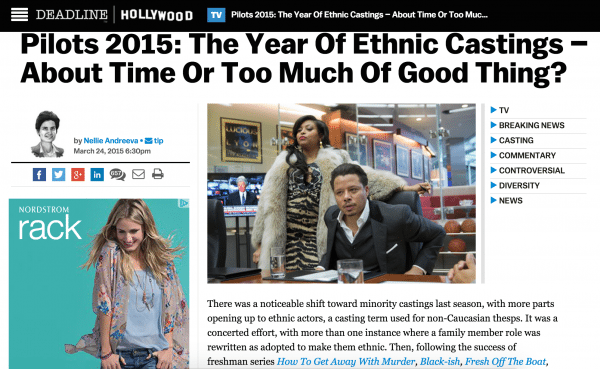 Here is just a sample of Andreeva’s piece:

But, as is the case with any sea change, the pendulum might have swung a bit too far in the opposite direction. Instead of opening the field for actors of any race to compete for any role in a color-blind manner, there has been a significant number of parts designated as ethnic this year, making them off-limits for Caucasian actors, some agents signal. Many pilot characters this year were listed as open to all ethnicities, but when reps would call to inquire about an actor submission, they frequently have been told that only non-Caucasian actors would be considered. “Basically 50% of the roles in a pilot have to be ethnic, and the mandate goes all the way down to guest parts,” one talent representative said.

In one instance, after a number of actors of different ethnicities tested for two roles in a pilot this year, two Caucasian actors ended up being the top choices for the two remaining regular parts. However, because of a mandate from the studio and network, one of the roles had to diverse, so the pilot could only cast one of the top choices and pass on the other to fulfill the ethnic quota. “They need to say the best man or woman wins,” one rep suggested.

Because of the sudden flood of roles for ethnic actors after years of suppressed opportunities for them, the talent pool of experienced minority performers — especially in the younger range — is pretty limited. That has led to a feeding frenzy, with a number of straight offers locking in ethnic talent before they could be snatched by another pilot.

A lot of what is happening right now is long overdue. The TV and film superhero ranks have been overly white for too long, workplace shows should be diverse to reflect workplace in real America, and ethnic actors should get a chance to play more than the proverbial best friend or boss.

But replacing one set of rigid rules with another by imposing a quota of ethnic talent on each show might not be the answer.

So, maybe Deadline will still linger around for a few more years, publishing innocuous recycled updates and aged Tinseltown obituaries, but one thing will remain clear: Who can really take the site seriously?

Anyone who can claim with a straight face and an actual attempt at an argument that “too much diversity” in TV and media is a problem has to be suffering from segregation era withdrawals. For decades, the media establishment has misrepresented the cultural landscape in front and behind the scenes. The stories told and images depicted have often oscillated between stereotypical and borderline animations. It has perpetuated a dementia that mandates casts and crews must be monotonous and monochromatic. This has translated into pop culture, and buying and believing that this is the American mainstream. Nellie Andreeva not only drank the Kool-Aid, she pretty much did a million laps in it. Her reality, her belief system is one in which “ethnic” (her words used over 20 times) representation should be kept in check and controlled. 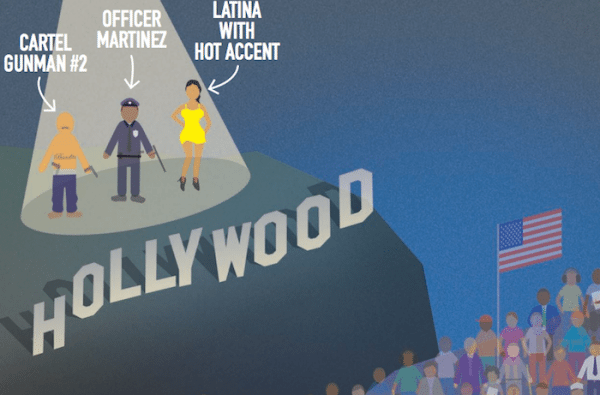 The worst part of it all? Andreeva probably does not even realize the mental mess she has created. To question and to denounce the expansion of diverse representation in media can be equated to demanding certain communities go to the back of the bus. It points to a systematic failure by those that purport being the gatekeepers of culture to realize that the mainstream has never been about them and has always been about all of us.

According to The Latino Media Gap, a 2014 NALIP commissioned study, Latinos represent 17% of the population yet it would take 60 years for Latinos to fill 17% of lead roles in the top 10 features or shows. Even by then, the Latino  population would have doubled and it would need to be further ahead to accurately represented. In other words Ms. Andreeva, sorry we are here to stay—get used to it.

You will see many more “ethnic” roles.

You will see many more “ethnic” shows and scripts.

You will see many more “ethnic” executives and decision-makers.

The sooner you accept it, the sooner you realize it, the easier it will be for you to remain gainfully employed in this business and the faster you can turn around the sinking Deadline ship.

The first step to recovery is acceptance. You don’t need to apologize. You shouldn’t be ashamed, Ms. Andreeva—you just didn’t know any better. Just in case and to make it crystal clear: we were and we continue to be the mainstream.

How about instead of questioning how your head is exploding with so much “ethnicity” around you, you embrace it and integrate it in your work. If you get to know us, you might actually like us. So come on over, we are having a big bad “ethnic” bash in June: Latinos taking over Hollywood. We will discuss this and many other exciting “ethnic” issues. You might learn a thing or two, Ms. Andreeva. Then you can take it back to your colleagues and try to revive your defunct Deadline site.

Axel Caballero is the Executive Director of the National Association of Latino Independent Producers (NALIP). You can follow Axel on Twitter @axelwcaballero.

One response to “Deadline Hollywood and Why It’s Dead”