US Government Murder and Cover-Up: The Ponce Massacre (Part I)

The Ponce Massacre was a complete horror. Over 200 unarmed Puerto Ricans were seriously wounded. Dozens were maimed for life. Seventeen were killed, including a woman and a seven-year-old girl. 78 years later, many people have seen the famous photo of this slaughter. 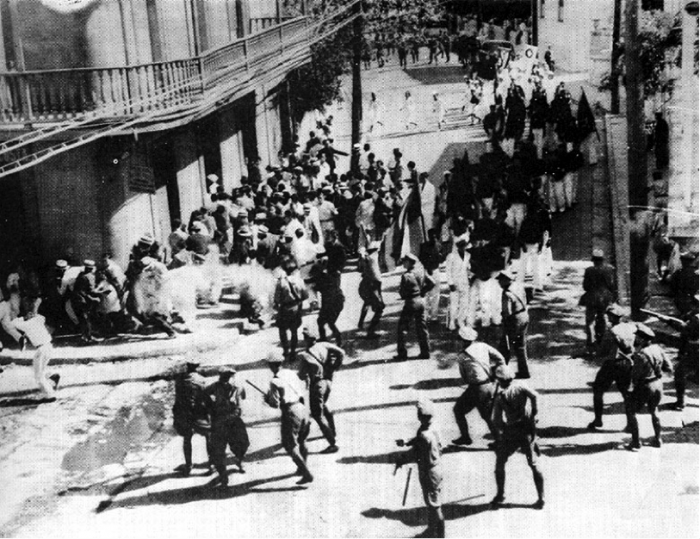 But few people know the antecedents, the sequence of events and the cover-up that followed it.

The massacre had its roots in the agricultural strike of 1934. When Pedro Albizu Campos helped to organize the macheteros (the sugarcane workers), and their wages doubled from 75 cents to $1.50 for a 10-hour day, a panic ran through the U.S. expat community in Puerto Rico.

A Citizens Committee for the Preservation of Peace and Order was formed. They sent a telegram to President Franklin Roosevelt, stating that “A state of actual anarchy exists. Towns in a state of siege. Citizens unable to leave home. Police impotent. Business paralyzed.” Sugar industry attorney Charles Hartwell warned that the Nationalists were planning another strike, in which “every American in the sugar plantations will be murdered.”

In response to this hysteria, FDR installed U.S. Army General Blanton Winship as the new governor. Winship’s primary mission was to crush the Nationalist Party, and intimidate anyone from joining them. 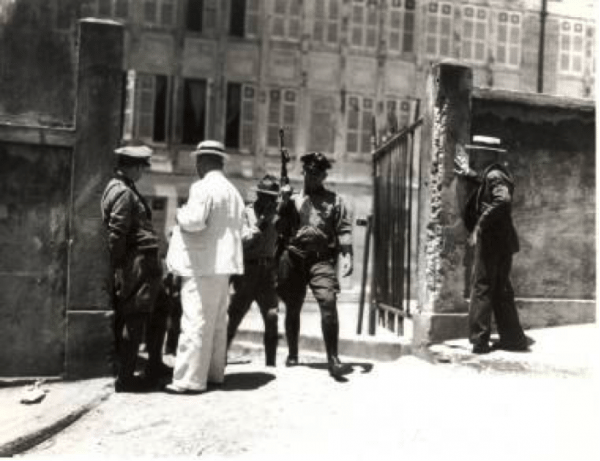 Winship militarized the entire police force. He provided them with machine guns, grenades and riot gear. He spent weekends inspecting his new police training camps —modeled after military boot camp— which he created throughout the island. On March 21, 1937, over 200 of these “military” policemen were mobilized into Ponce.

They all carried Thompson submachine guns, rifles, pistols and tear gas. They also wore jodhpurs and riding boots and Sam Browne belts, as if dressed for cavalry battle.

It was Palm Sunday.

By 3pm the street was full: nearly 400 men, women and children in their Sunday best, the men in straw hats and white linen suits, the ladies in flower print dresses and children playing all around. It looked like a quiet afternoon in the park.

The Nationalists had obtained parade permits and many of them hurried with their families, from all parts of the island, to get there in time. The Ponce town square, city hall and several churches were just three blocks away.

Everyone cheered when 80 Cadets of the Republic, 12 uniformed nurses and a five-piece marching band arrived in support of Albizu Campos and the Republic of Puerto Rico. But then Police Captain Guillermo Soldevilla jumped into the street and told everyone to go home, the parade was over, because their parade permit had just been revoked.

After a short discussion, the Nationalists decided to march anyway. People smiled and waved their palm fronds at them. And then the police went crazy.

A shot rang out.

Iván Rodríguez Figueras fell like a rag doll and the blood spurt from his throat in foot-long jets, with each of his heartbeats. It sprayed on a little girl next to him who started screaming.

A second shot exploded and Juan Torres Gregory, an 18-year-old poking his head out a window, fell down dead. 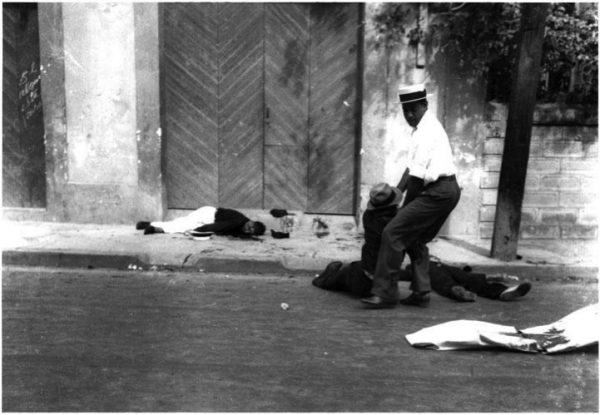 A third shot dropped Obdulio Rosario, who was carrying a palm leaf crucifix. Obdulio’s mouth flew open and a spurt of blood rolled down his chin and onto his shirt. He fell on his face and clawed outward with his fingers. Everyone stared unbelievingly at the squirming figure on the ground, as Obdulio lifted himself up with his arms, like a lizard, and then dropped for the last time. A thick stream of blood ran down the crushed rock of the roadbed.

Panic, screams, curses as everyone ran in all directions, but they couldn’t escape because Captain Soldevilla, Captain Segarra, Captain Bernardi and 200 men with Tommy guns and rifles were stationed all around them. They blocked every route and created a killing zone. They kept firing and firing…

A boy was shot on a bicycle.

A father tried to shield his dying son, and was shot in the back.

An orange vendor hid behind a statue of Jesus Christ, until a cop ran over and shot him in the head.

Clouds of smoke covered the street as 20 submachine gunners set their feet and sprayed their 10-pound Tommy guns.

An old man flew upward, his body split almost in two, still clutching a palm leaf in his hand.

Another man raised a bible and started to pray, until they blasted off the back of his head in a bright red spray. The bible went flying and the dead man dropped like a sack of cornmeal. 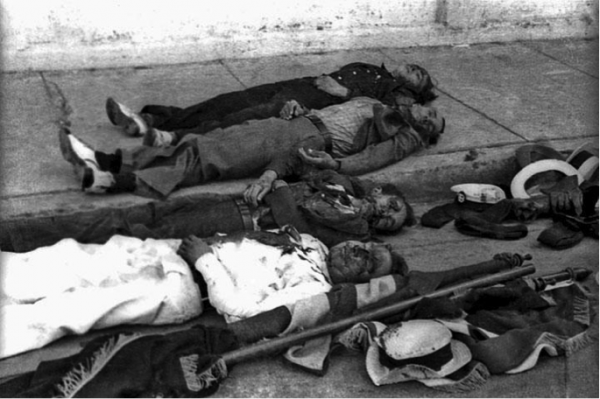 The flag bearer of the Cadets was killed.

Carmen Fernández grabbed the flag and was shot in the chest. Dominga Cruz Bacerríl, who was visiting from another town, grabbed it and managed to run away.

In a contagion of panic or savagery the police kept firing, again and again. They shot into several corpses, over and over. They fired over the corpses, as if they didn’t exist.

The bullets flew everywhere. They hit the pavement, the buildings, the trees, the telephone poles, filling the air with dust and grit. And then the dense, vibratory WHAP as they tore into human flesh.

The police climbed onto cars and running boards and chased people down the side streets, shooting and clubbing anyone they could find.

They shot a 7-year-old girl in the back, as she ran to a nearby church.

They shot a man on his way home, as he yelled, “But I am a National Guardsman!”

They split a fruit vendor’s head in two with a riot club.

They clubbed a man to death on his own doorstep.

They clubbed 53-year-old Maía Hernández del Rosario on the head so hard, that her gray matter spilled out onto the street and people kept slipping on it.

They shot men, women and children in the back, as they were trying to run away.

They kicked several corpses to see if they were really dead, and shot them again if they weren’t.

A policeman shot four men who pleaded for mercy with their hands raised.

A Cadet of the Republic, Bolívar Márquez Telechea, dragged himself to a wall. Just before dying, with his own blood, he managed to write “Long live the Republic, Down with the Murderers,” and signed it with three crucifixes. 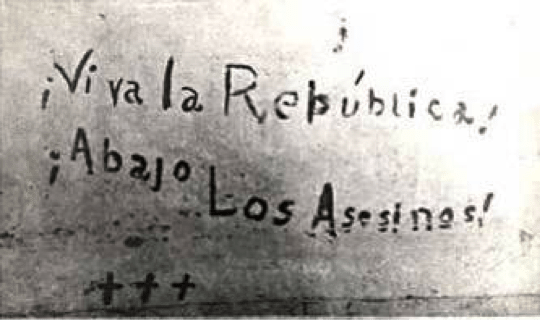 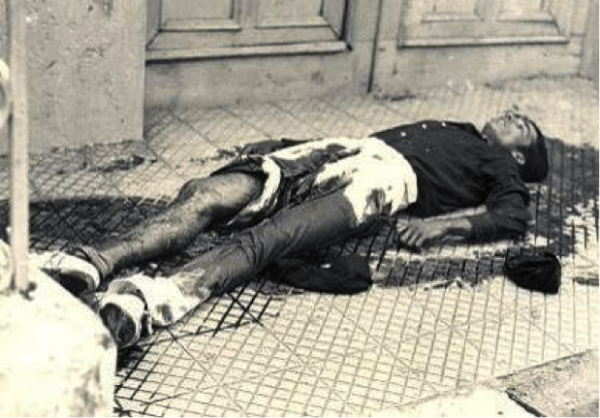 The police kept shooting and clubbing for 13 minutes. By the time they finished, 17 men, one woman and a 7-year-old girl were dead and over 200 more were gravely wounded—moaning, crawling, bleeding, begging for mercy in the street. The air seethed with gun smoke, everyone moved in a fog of disbelief, as policemen swaggered about and blood ran in the gutter.

As the smoke cleared over Aurora and Marina Streets, the following all lay dead.

It was a shameful moment in American history: the open murder of innocent men, women and children on Palm Sunday. Not merely because they believed in the independence of Puerto Rico, or because they marched in a public street—but because they were poor, spoke Spanish and their skin color was a little darker than their rulers from El Norte.

But the shame became even greater, when the U.S. government tried to cover it all up.

2 responses to “US Government Murder and Cover-Up: The Ponce Massacre (Part I)”