On Palm Sunday, March 21, 1937, The Puerto Rican Nationalist Party peacefully marched to recognize the ending of slavery by the governing Spanish National Assembly in 1873 and in protest of the imprisonment of Nationalist leader Pedro Albizu Campos by the U.S. government in Ponce, Puerto Rico. 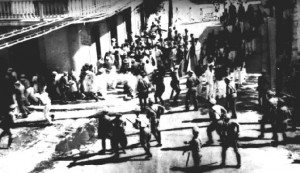 Photo of the Ponce Massacre by Carlos Torres Morales

Days before the peaceful march, organizers received legal permits by the mayor of Ponce José Tormos Diego. But when the U.S. appointed Governor of Puerto Rico, General Blanton Winship, heard of the protest he immediately demanded the permits be revoked. Governor Winship then directed Colonel Orbeta to gather police units from across the island and stop the protest. It was reported that over 200 heavily armed police officers surrounded the protesters.

As Puerto Rico’s national song “La Borinqueña” began playing, the demonstrators started marching. The police fired at them from four different positions for over 15 minutes killing 17 men, 1 woman, a 7-year-old girl, wounding over 235 and arresting over 150 unarmed protesters.

Afterwards, an investigation took place on whether the protesters or the police shot first. Governor Winship pressured the district attorney’s office and prosecutor Rafael Pérez Marchand to not file charges against the police officers and arrest more Nationalists but Pérez Marchand resigned, seeing that he was not allowed to conduct proper investigation. The US Commission for Civil Rights, led by Arthur Garfield Hays, independently investigated the incident and concluded the March 21st event constituted a massacre.

On July 25th 1938 Governor Winship held a military parade in Ponce, Puerto Rico to prove his success against the Nationalists. But the parade was met with gunfire aimed at the grandstand where the Governor sat in an attempt to assassinate him. This was the first time an attempt on a Puerto Rico’s Governor life was made.

Today, We remember the dead and wounded on that unfortunate day and pray a time will come when justice is served. Pa’lante!

The video below shows actual footage of the Ponce Massacre: