Boricua Twitter Schools the Ignorant About Another Winning Powerball from PR

Here we go again. Last night, yet ANOTHER winning Powerball ticket was sold in Puerto Rico, and although you would think the U.S. mainlaind Twittersphere would have gotten the clue from the last time a winning ticket came from the island, it looks like one guy didn’t even register: 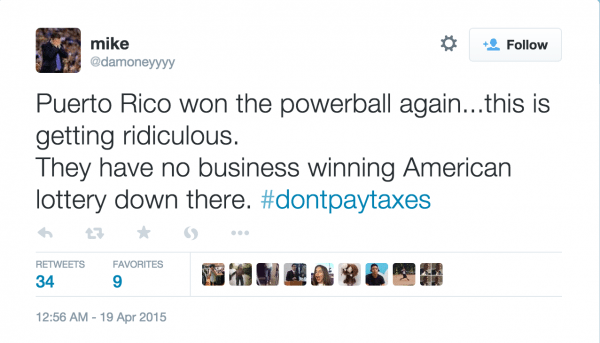 Guess Mike didn’t read this piece. Or this one. No worries. This time around, Twitter took him to task:

@damoneyyyy You just need to read a little bit. Your lack of knowledge is killing me.

@damoneyyyy puertoricans don't pay taxes , but serve in combat so you can have your freedom….

@skifdz @damoneyyyy we pay taxes too, please educated yourself don't be another ignorant American

@damoneyyyy Translate. You better watch your mouth babe. Puerto Ricans we do pay taxes for your food & shit. We go to battle for ur freedom

The response to @damoneyyy’s first tweet was so hardcore, he had to backtrack with this:

That didn’t seem to help:

@damoneyyyy @MrTonitas whats the fucking deal? In order to win we must buy the fucking ticket…nobody is giving them for free

By the way, @damoneyyy was not the only one who claimed ignorance:

So I open my Powerball email and it says that a winning ticket was sold in the State of Puerto Rico! — feeling confused

John got this response:

@jfward55 @thinkpuertorico the Congress, The Supreme Court, we Puertoricans are also confused since like the 50's

Then there are these guys:

they got the powerball in Puerto Rico?

4/18/2015 Powerball Jackpot hits Puerto Rico again – is that serious? Are you kidding me?

That’s ok, because for every one of these profiles, you have people who think this is all amazing news:

Each time someone in Puerto Rico wins the Powerball, a grigno commits hari kari.