On the Scene at the Refugio Oil Spill: How Do We Stop This From Happening Again?

Stop me if you’ve heard this story before:

“Safe” pipeline bursts, oil spills all over beach/ocean/wetlands. Cue the disaster response teams! (To cleanup the oil AND on the other side, crisis managers to salvage the responsible company’s image). Cut to contrite oil company CEO apologizing on TV, promising, for all that is good and sacred in his life that this will never happen again, because this was somehow a rare accident (nevermind the company’s faulty record) and of course they will be improving their safety, pipelines, training or whatever else they need to say.

Until it happens again. And again. Don’t believe me?

How about Santa Barbara in 1969? The Exxon Valdez Spill in Alaska, 1989. Cosco Busan in SF Bay, 2007. Deepwater Horizon in the Gulf of Mexico, 2010. You get the idea. Unfortunately, this time it’s back to Santa Barbara. 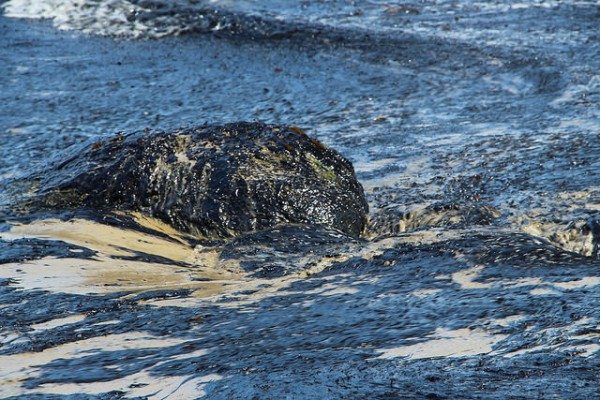 The first thing you notice when you get near is the smell—all accesses to affected beaches are understandably closed in order to allow professionals to control and clean (in some instances by hand) the spill as well as to protect civilians (some well-intentioned but untrained volunteers) from the sludge. Still, even from a freeway on ramp leading to Refugio State Beach, one’s senses are overwhelmed by the smell of oil, not by the gorgeous vistas. The second thing you notice are a couple of families, loaded up and ready to kick off the holiday weekend camping, the look of disappointment in their faces. Media trucks are at this point lining up wherever possible while helicopters circle overhead.

The reason I’m here on a detour from a previously scheduled weekend trip to Southern California is because I’m worried about the underwater parks that lie just off the coast, near the oil slick. These marine protected areas are a critical part of the statewide network of wildlife havens implemented in 2012 through an innovative public process where the design and siting of said protected areas was informed and guided by local residents, conservation organizations, fishermen and science advisors. Four of these underwater parks lie within the vicinity of the oil spill, putting in jeopardy not only the local wildlife and more than a decade in collaborative work, but also potentially taking out a building block of this chain.

And here’s the thing, just like a savings account needs an initial investment to give dividends, all of these areas were selected for their potential to protect AND ideally nurture thriving wildlife populations. That is, every single one of these blocks is special and contributes to the overall health of the region’s coastal ocean (Take blockbuster Naples Reef, home to thriving healthy kelp forests and the wildlife that love them).

It’s hard to see this happen, not just because of the tens of thousands of hours of work Californians all over the state invested to make it happen (including two years of doing nothing but this for every waking moment on my part), but rather, because we should have learned a lesson (or many) and acted to prevent this already. In the Golden State, the right to access the beach is enshrined in the California Coastal Act, the passage of which may have been possible, ironically, by voters spurred to action after the 1969 Santa Barbara Oil spill. Surely a beach full of crude oil is not what was envisioned by voters.

So, where do we go from here? How do we help? First, we put down the buckets and pick up the phone. Call your local elected representative and ask that they take action to stop this from happening again. If you are in California, sign the following petition and follow it up with a call so that we pass SB 788 (a bill currently under consideration by the state legislature) and we can stop the oil spill impacts on our coasts and oceans. If you’re interested in learning more, the Oiled Wildlife Care Network, currently working on site in Santa Barbara, has the best suggestions

Both wildlife and people alike deserve to enjoy the true refugios marine-protected areas are meant to be, without the muck. Let’s make sure this doesn’t happen again.

One response to “On the Scene at the Refugio Oil Spill: How Do We Stop This From Happening Again?”