A Rebelde Goes Back to Harvard

There was this surreal moment last night at Harvard’s Science Center during the beginning of the Latin@ Graduation that hit me hard—not the violent hard you would feel if a brick fell on your head, but more like the hard you get when your heart is about to burst with joy and happiness.

The fabulous Erika Ontiveros Carlsen, a new graduate from the Divinity School and the person who launched the idea of a full-blown high-profile Latin@ Graduation with close to 300 people and 65 students, was reading my bio, since I was one of the event’s emcees. When Carlsen said “founder of Latino Rebels,” the most bizarre thing happened: people applauded. Like really applauded. In the very same lecture hall where I used to struggle with science classes in the fall of 1986, just about 100 yards from my first dorm room at Harvard, where I used to struggle there as well.

I was stunned, but not like the punch to the stomach type of stunned. It was more like this.

Was I finally home, 25 years after I graduated, in a place that really didn’t completely feel like home while I was there?

The answer was yes.

So when I took the podium to help emcee the event, it was time to shout out what many Harvard students (including myself 25 years ago) knew all along: Latinos have always been here, we’ve had an illustrious history of achievement at this University, yet when it came to being heard, our voices had been on mute (both imposed and self-imposed) for endless years. We were unknowingly encouraged to conform, to get in line and follow the Harvard way. We kept quiet, had some little victories, but have never exprienced any full or sustainable impact. Last night at a Science Center lecture hall, a group of Latinos declared that being passive and silent was no longer an option. We’ve been here, we’ve always been here and we will continue to be here. The marginalization we felt would cease. The community we had built on our own without any real institutional input or vision from the University would blossom more than ever. Harvard would have to hear us. It no longer had a choice.

For the next 120 minutes, we celebrated as a community (both in English and in Spanish), taking to heart the words César Chávez once said: 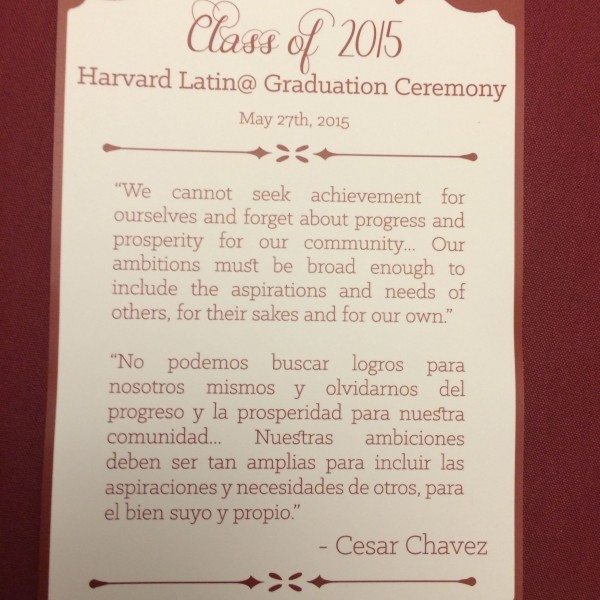 We reveled in the words of Jorge Ramos who told us all to find the magician in all of us and achieve extraordinary things, while at the same time understand that this is “our Harvard,” one that has been built up from the sacrifices of the families who raised us. 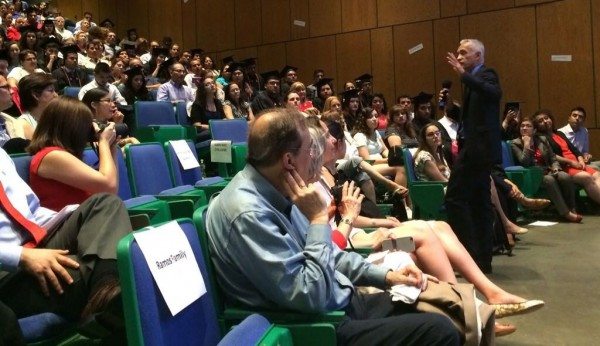 We also gave a stole to each student who would be later celebrating the official Harvard Commencement earlier today in the middle of Havard Yard: 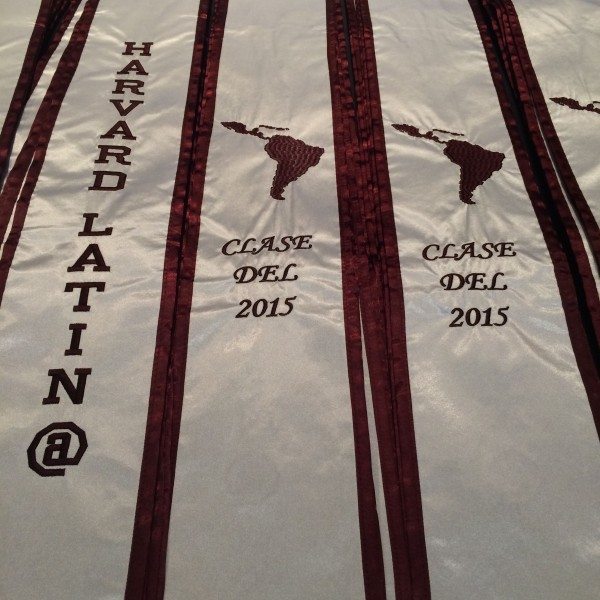 And we all sensed the moment that what we were accomplishing was bigger than all of us.

After the ceremony, while the families flocked to Ramos for photos (he stayed until everyone who wanted a photo with him took it) and others meandered towards the churros, an older man from southeast Texas whose daughter had graduated came up to me to share his thoughts about the ceremony:

It was the only event here at Harvard where I felt like I was a part of and that who I am was a part of it. What you told those students, to stay strong, to help others, to prop them up and tell them to be bold, that is exactly what we must do as Latinos. We always have to work harder and constantly prove ourselves. But that feeling of constantly having to prove ourselves will go away as we continue to grow. This type of event needs to happen each year and we need to fill two lecture halls next year!

I thanked him for his words, as I realized that these kinds of words are rarely heard at Harvard, especially inside a place dedicated to the sciences. But he was right: for us as Latinos, the only thing we have that keeps us grounded are the people who surround us, from our families to our friends to the latest graduates who dream to truly disrupt and impact the world.

It was right then when I realized that my old uncomfortable home really was changing. What was once unfamiliar and cold was becoming welcoming and loving. This was the Harvard I wanted, and I will not stop until we achieve it.

Heading back home, a very dear and close friend, Carlos Ulloa (Ed.M 98), messaged me to let me know that contrary to what was being reported by the current crop of students (and me as emcee too), last night’s Latin@ Graduation event was not the first one ever held at the campus. In fact, he said, a smaller one was held in 1998 and he had a photo to prove it. After apologizing for this mistake, Charlie sent me more details about that event. 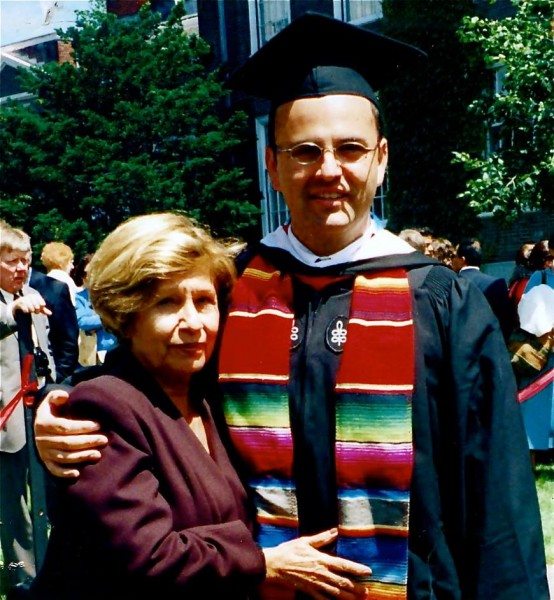 We had a Harvard Latino Graduation Ceremony in 1998. Roberto Rodriguez, President Obama’s education advisor was there! All of my Latino friends from several colleges were there too! My Tia Chepa was there! We spoke in Spanish too. Many of us wore a tapestry of colorful stoles. Our families finally got to meet each other if only briefly. Our Latino Graduation legitimized our Harvard experience for our parents who didn’t understand why went we away so far to go to school. It’s a moment my Latino friends “remember” in addition to Salsa Night at the Law School or midnight runs to the 24 hour Taco Bell.

Unfortunately very few Latinos get tenured at Harvard so there isn’t a big coming home experience. We leave and don’t return. If we do return, we look for the people behind the scenes that made us feel at home. The entire time you are at Harvard you feel like you are the first Latino to walk on those cobblestone streets.

I do hope there have been other Latino graduation ceremonies and that in the future, Latino alum are invited to attend.

Getting Carlos’ news last night confirmed to me that the muting of our voices and how “you feel like you are the first Latino to walk on those cobblestone streets” have become too common of a theme at Harvard. Last night’s Latin@ Graduation event at the Science Center proclaimed that such days are ending and that in order to eradicate those feelings of otherness and displacement, Harvard’s Latino community must continue to step up and demand more from the University. Graduation ceremonies are necessary, but now we must use our voices to transform Harvard, whether it’s in the formation of a permanent Latino Studies Center or having the University stop hiding behind diversity spin games when it comes to faculty hirings. Harvard’s Latinos must be more vocal than ever.

This week, I came home again. The place has changed a little, but it still needs a lot more fixing. 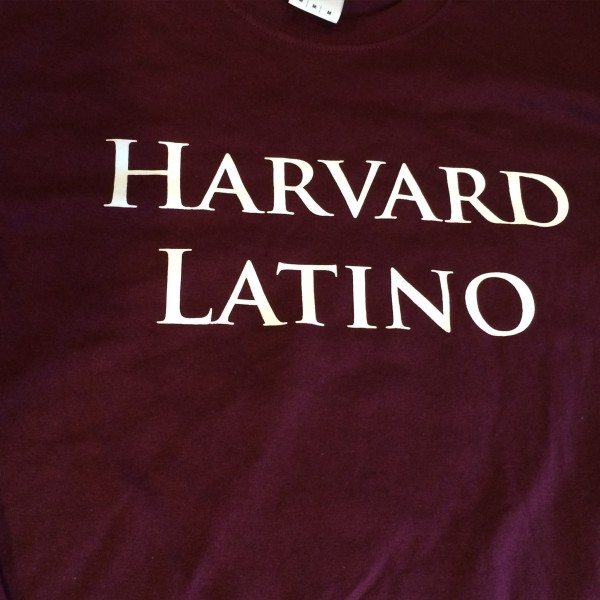 Julio (Julito) Ricardo Varela (@julito77) founded LatinoRebels.com in May, 2011 and proceeded to open it up to about 20 like-minded Rebeldes. A 1990 Harvard graduate in the History and Literature of Latin America, he pens columns on LR regularly. Julito has represented the Rebeldes on several outlets, including MSNBC, CBS, NPR, Univision and The New York Times. Recently, he was a digital producer for Al Jazeera America’s The Stream and is currently the Digital Media Director for Futuro Media Group.

2 responses to “A Rebelde Goes Back to Harvard”