I am driving down Route 1 headed to the stadium normally reserved for Patriots.

My middle schooler (and fútbol-obsessed) son is in the back seat with his friend. They talk Clint Dempsey, Ronaldo and if they will ever get the chance to watch an FA Cup Final at Wembley.

Did you catch that Chile-Argentina Copa América match? ¡Alexis!

What about the U.S.? Why does Bradley suck at midfield? I heard González will start tonight.

Deuce will score one.

The two boys return to their devices. My son is wearing my old Landon Donovan 10 tee I gave him, since he is as tall as I am now. His friend is wearing a Gronk jersey. They play FIFA 2015. About a mile from Gillette Stadium, traffic begins to crawl. It is around 4:45pm on a hazy Friday summer in Massachusetts. Already I see signs for parking. Some cars drive into those lots and pay $20. I decide to head to Gillette, where the fee will be $40.

All for a Gold Cup doubleheader first-round event.

Honduras vs. Panama at 6pm, followed by the United States vs. Haiti. The radio tells me 45,000 people will be there.

45,000 people. At an NFL football stadium in a Massachusetts suburb about 25 miles south of Boston.

All for a Gold Cup doubleheader first-round event.

As we slowly get to the stadium, I notice that the most of the cars around me have Honduran flags flapping in the breeze. Inside the cars, families —from the young to the old— wear catracho jerseys that to me are as classic as anything I have seen at Fenway, Dodger Stadium or Yankee Stadium. I like the catracho jerseys. And they are everywhere. 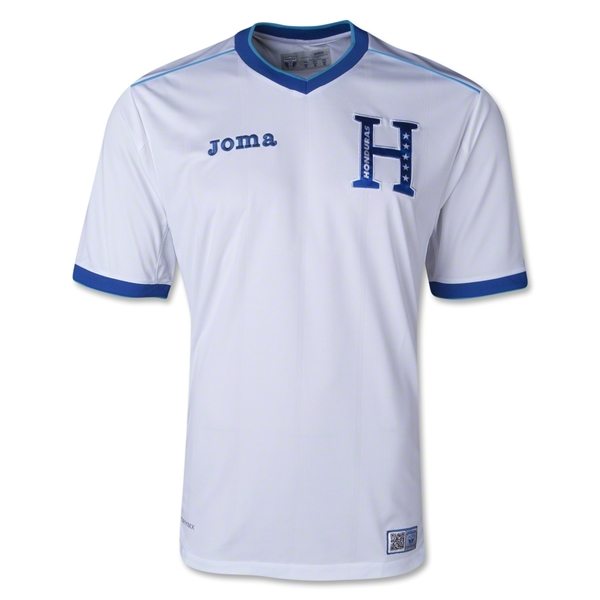 We get to the Gillette parking lot. We meet friends. My son and his friends set up some Pugg goals near our cars while the adults set up the grills and coolers. Surrounded by catrachos, within minutes, a 2v2 game turns into a 5v5 one. The youngest player is a U8 boy from Revere. His dad is Honduran who used to play pro in Guatemala. The oldest player is me. 46 years old, from Puerto Rico with a stop in the Bronx and now a suburban dad outside of Boston.

We kick the ball around, pretending that we are all the next Messi. People call for the ball in both languages. Some drunk millenials in USA gear cheer us on.

Soon enough, we head to the game. This is a common sight on the way in: 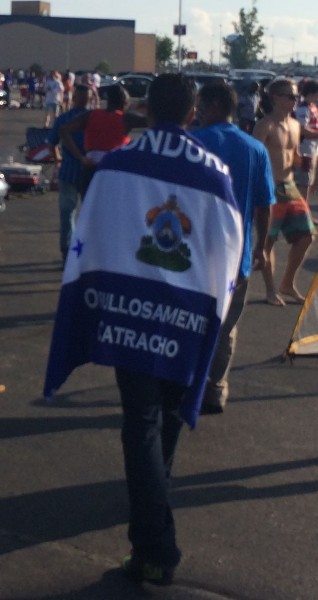 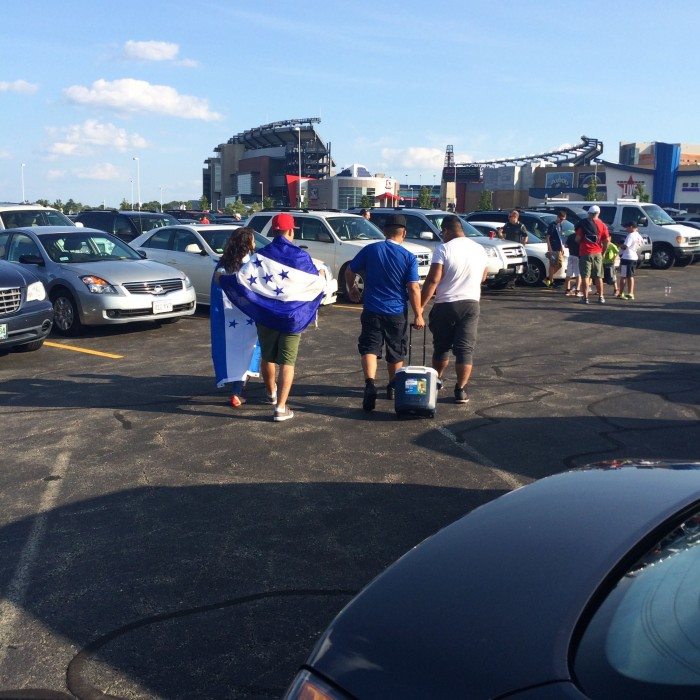 I start thinking about it all. Consider these points:

According to the latest numbers, Hondurans represent about 15% of Boston’s new immigrant population coming from Latin America. That’s a larger percentage (about 1% more) than those new Irish immigrants coming from Europe.

I continue walking. Then I see this: 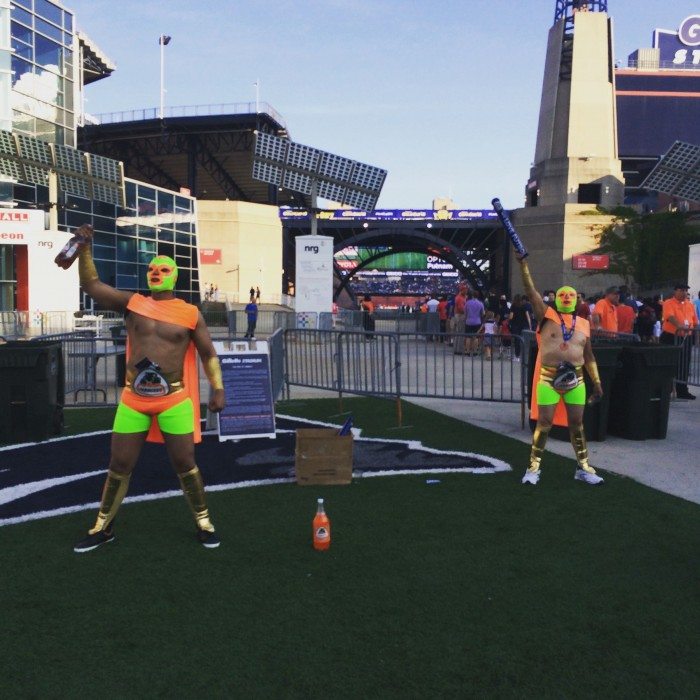 Mexican soda company Jarritos is sponsoring the Gold Cup event. As silly as this might look, I can guarantee you that in my years of going to Gillette Stadium, I have never seen this. Ever.

When we get to our seats, I take a picture of the back of this jersey, that of América, a Colombian pro team from Cali: 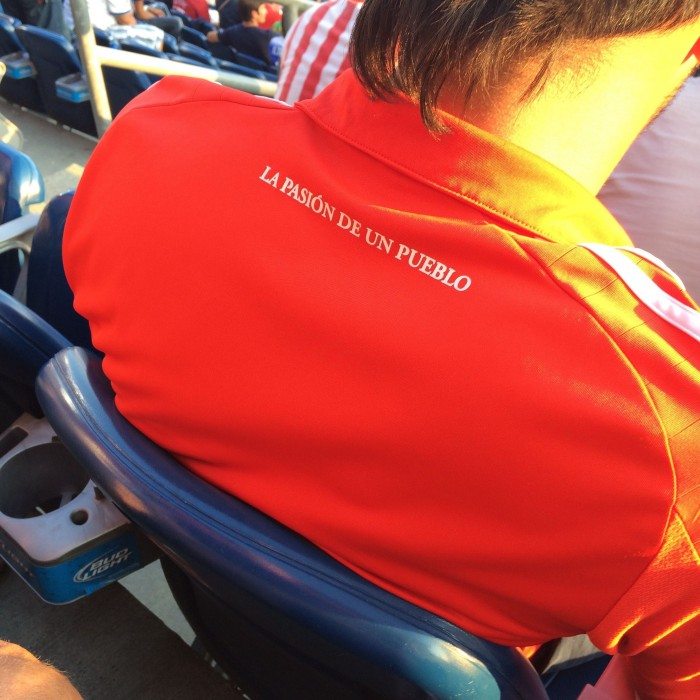 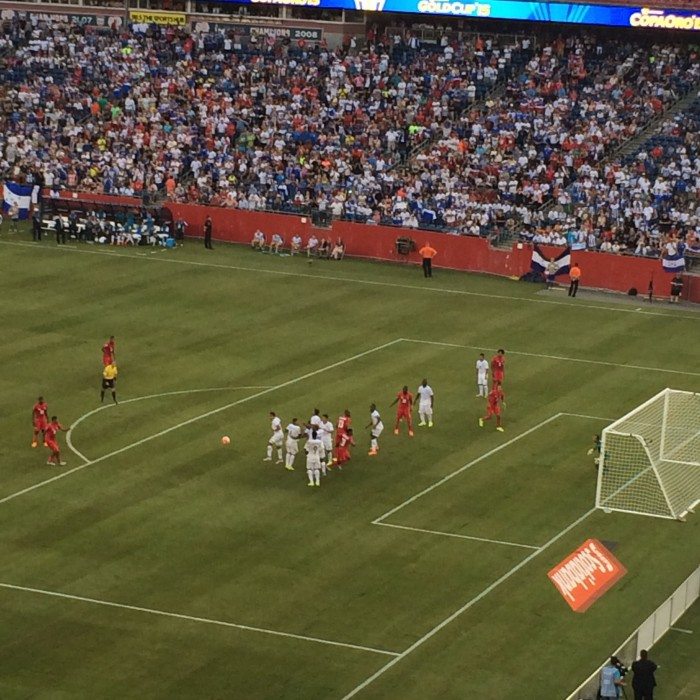 I turn to a young couple to my left. He is rooting for Honduras (catracho jersey, of course) and his wife is from El Salvador (she is always wearing a Honduran jersey, but tells me that would never happen if El Salvador were playing). The young man is agonizing as he watches Honduras’ efforts against Panama. The team had tied the game, 1-1, with minutes left, and at one moment in extra time, Honduras scores a pretty goal, but it gets waved off due to a bad offsides call.

The catracho fans start yelling an epithet in Spanish that some of the non-Spanish-speaking American fans begin to yell as well. My son asks me what it means. I decide to not let him know.

In between the two games, my mind turns to those insulting comments of “rapists” and “criminals” who are “invading” the border. The damage such violent rhetoric made against Mexico and others from Latin America has struck many personally. I look around and wonder if Donald Trump will ever witness a scene like this one in Foxboro. Where cultures mix, languages mingle and joy ensues… all because of fútbol.

It is right then when I see something that confirms to me that this irrational xenophobic fear of the United States becoming some Latin American “hellhole” is not even a reality. Surrounded by a bunch of catrachos, I notice that a few of them brought U.S. soccer jerseys with them as well and as the Americans take the field, they put those jerseys on and yell, “USA! USA! USA!”

You are damn lucky, Trump and all you other “patriots,” that people still want to come here to this country.

The scene throws me back so much that I forget to take a photo or video it. I just absorb it and begin to wonder: what stories do these fans have? How did they come to the Boston area from Honduras? Why did they leave? And what dreams do they have for their families? Such questions distract me for a while, but then I realize that the second game was beginning and I had to start cheering with the catrachos for my beloved U.S. soccer team.

I turn my phone off and watch the game. The Americans didn’t play great and the Haitians (along with their fans, another amazing Boston community) played with passion. The U.S. escaped with a win and we all felt happy, even those catrachos who thought the referee robbed them of a win against Panama.

Heading back to our cars, we see the crazy traffic trying to leave Foxboro. It was a scene I have seen at too many Patriots game. So instead of waiting in a car that wouldn’t move, we decide to play another 5v5 game under the lights in the parking lot: catrachos y boricuas.

Julio (Julito) Ricardo Varela (@julito77) founded LatinoRebels.com in May, 2011 and proceeded to open it up to about 20 like-minded Rebeldes. A 1990 Harvard graduate in the History and Literature of Latin America, he pens columns on LR regularly. Julito has represented the Rebeldes on several outlets such as MSNBC, CBS, NPR, Univision and The New York Times. Recently, he was a digital producer for Al Jazeera America’s The Stream and is currently the Digital Media Director for Futuro Media Group.