This week, as President Barack Obama commuted sentences for 46 non-violent drug offenders, we revisit the story of Jay Hernandez, the first Latino given clemency by President Obama in 2012.

These days, Jay is back home and acknowledging the need for more reform and solidarity amongst Latinos as a whole. Jay, who recently spoke with the Latin Times and other media outlets, is thankful for Obama’s historic initiative on prison reform. However, all of those years that Jay was locked up, he often wondered: where were his people to advocate for him? The American Civil Liberties Union stood by his side and advocated for sentencing reform, while other Latino-centric organizations remained silent.

Jay’s story is important for various reasons, but most notably for how he has started a non-profit that advocates for non-violent drug offenders and other Latino-based initiatives. How many people like Jay do we know in our communities who have been victims of a biased criminal justice system? We’ve all made mistakes in our lives and perhaps done some things that wouldn’t make us proud. Jay was a product of his environment: you can go to any hood or barrio in the U.S. and find kids leaning towards drugs, alcoholism and gangs. Does that make these children inherently bad?

We have evidence that the criminal justice system adversely and disproportionately affects people of color. And as Latinos, the mainstream media would prefer that the Latino vote is consumed by immigration reform initiatives when there should be more attention given to criminal justice reform. Because in reality, the police, the courts and the prisons affect us all and perhaps to a greater level here in the U.S. Look at the solidarity and rallying amongst the Latino community over Donald Trump’s statements on immigration. Do we really need another White man to make comments about “Mexican criminals” to stand in unison with our Brothers and Sisters who have been incarcerated due to racists laws?

We are powerful and have the capacity to change the world right now.

Our communities must do better: we have to stand together with each other in the good and the bad times, to assist and hold each other accountable, because in reality we are all capable of achieving more. We can achieve more together. Let’s collectively advocate for criminal justice reform, help our familia when they need it the most and continue mobilizing on initiatives for the historically voiceless.

The following essay was written by Jay in early 2012 while he was still incarcerated. Please read his perspective and his call to action for greater Latino advocacy on criminal justice reform. Adelante. 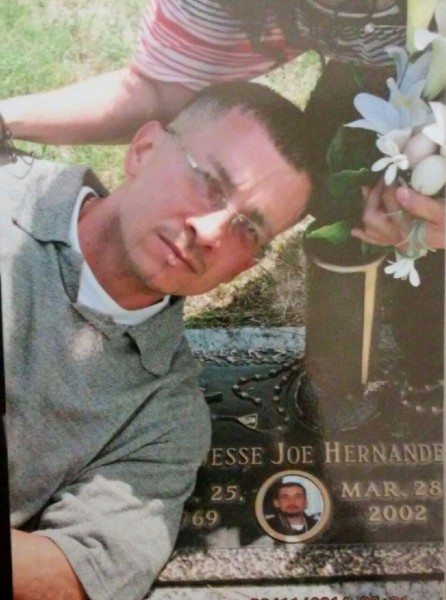 Jason Hernandez, at the grave of his brother, Jesse.

BROWN AND OUT
THE WAR ON DRUGS HAS CRIPPLED HISPANICS AND THEIR COMMUNITIES JUST AS MUCH AS THIS COUNTRY’S IMMIGRATION POLICIES: SO WHY ARE HISPANICS DOING NOTHING ABOUT IT.

Over the past several years Latinos across America have united in an effort to bring reform to this Nation’s immigration policies and for good cause. For in addition to these laws being arbitrary and unfair, nearly every Latino in this Country has a family member or friend who is here undocumented. Thus we know personally the hardships our people endure as a result of being denied the basic freedoms and rights upon which this great country was founded. Unalienable rights which the founding fathers, who themselves were immigrants or derived from immigrants, believed were not only guaranteed to all men who breathed, but were “endowed upon them “by their creator.”

However, we know this not to be the case in this day and age for those who are here undocumented. thus our brothers and sisters who are here “illegally” are not protected from unlawful searches, seizures, or detention. They do not have the right to bear arms to protect themselves; Nor can they voice concerns about injustices that plague them, their families, or communities, cause they have no right to vote—thus no voice. They can not obtain public housing assistance though their family may have no place to live. Food stamps are not an option, even though their kids are starving. Our brothers and sisters are also ineligible for educational assistance, despite risking their lives to better their lives and that of their family.

It is hard to imagine how an individual could live under such circumstances when he or she is deprived rights or assistance which are considered not only necessary for the betterment of oneself, but also for survival. Thus it is easy to understand why Latinos across America have formed organizations, initiated rallies, and have brought our people together to change this Nation’s Immigration policies.

However, I would like to shed light on another animal that is just as devastating to the progression or our race: “The War On Drugs.” I know at first glance it might be difficult to make the comparison on how drug laws are affecting Hispanics as bad as Immigration laws, but the similarities are there. For example, like an individual; who is here illegally, a person convicted of a simple felony possession of marijuana is unable to obtain or reside in public housing: This person can work, but we will often be discriminated against once the “felony” box is checked on his application. There will be certain employment and professional licenses he will never be able to qualify for. Laws prohibit them from applying for food stamps. Their driver’s license can be suspended:. hey also lose the right to serve on a jury and in most states the right to vote”

And just as an individual who is in this country undocumented can be deported, a person on probation or parole can be hauled back to prison for no more than being late to a probation meeting (though the state prohibits him from having a driver’s license to get there), for not having a job (though no none would hire him cause he is an ex-felon), for being untruthful where he lives (because he is too ashamed to admit he is homeless).

When the subject of crime and incarceration comes up a majority will state that the individual who broke the law “had a choice” —they chose to get in trouble— “now let them deal with the consequences.” Which admittedly they are right. But what if I told you decades ago criminal laws were constructed in a manner that incarcerated more minorities? That federal and state health, food and educational programs were amended to exclude these new waves of felons—majority of which were expected to be Latinos and African-Americans. What if I could further prove that our people were being systematically targeted throughout this country by law enforcement? That studies demonstrate 80% of the nearly 550,000 pedestrians stopped and frisked by the NYPD were Latinos and African Americans: In Illinois, Latinos accounted for 30% of the drivers pulled over and searched though we represented less than 3% of the drivers on the road: And a study on the New Jersey Turnpike found that despite Latinos and African-Americans accounting for any 21% of the drivers on that highway they comprised 80% of those pulled over and searched.

And there’s more. What if I could prove that in cases where a Latino and White person were arrested for the same felony the Latino would more likely receive a felony conviction and imprisonment, while his White counterpart’s charge would be reduced to a lesser crime with no jail time? And that although drug use and distribution is an rampant on college campuses as it is in our neighborhoods, you will never see SWAT teams donned in ski-masks, armed with assault rifles kicking down campus doors with battle rams as they do in our barrios?

And not only has it has been fully documented by federal judges, college professors and civil rights groups, but this racial injustice has been going on for nearly three decades. Our people who have fell victim to our justice system now have scarcely more rights and, arguably less respect than a freed slave or a black person during the height of Jim Crow and segregation. Leaving the felon to be legally discriminated against—to be the new “whipping boy,” the “new n#gg@%”, as Michelle Alexander states.

But what I think you will find more astonishing is there have been no sentencing reform organizations initiated by Latinos. All the focus by Latinos seems to be on immigration reform and there is great respect for their commitment. But ask yourself this question: How much of a difference will reformed immigration laws benefit our people as a whole if another beast known as “The War On Drugs” —or better yet “The War On Minorities”— that is, and has been for decades, systematically targeting our people who were born and raised in this country and stripping them or their rights at a pace much more rapidly than our undocumented brothers and sisters are receiving them?

Whether it is unfair immigration policies or racially biased drug laws Latinos and their neighborhoods are being decimated. The truth of the matter is in our neighborhoods a great percentage of our people have a drug conviction, been to prison, currently in prison, on their way to prison, or are here undocumented or have been deported. As a result, many of our people in the community can’t vote or are not present to vote. Leaving local and state politicians to have no concerns as to what is transpiring in our neighborhoods. In addition many people can’t find stable or adequate employment because either they have no papers or are on paper (probation/parole). But most devastating is the fact that generation upon generation of our children are brought into this world without one or both of their parents to raise them because either they have been deported or are imprisoned.

The outcome? Hispanics are becoming the leading race in this country when it comes to high school dropouts, teenage pregnancy, unemployment and poverty. Yet despite these alarming realities, our people have become boastful from the news that in years to come Hispanics will no longer be the minority in this county, but the majority. But to see what the future holds for our people if we do not come together and stand up for all our brothers and sisters, and not just the undocumented ones, you need to only drive through our barrios which are riddled with crime, broken homes, and poverty or walk through our prison system that is filled with Latinos, majority which are addicted to drugs and/or gang related.

YES, INDEED, WE WILL BE THE MAJORITY, BUT IN ALL THE WRONG CATEGORIES.

It was believed the Mayan calendar predicted the end of all civilization. We now know this prediction to be wrong. However, a case could be made that if Latinos don’t awaken as to what is going on with our people and come together and seek change for all, the Mayans may not have been foretelling the end of all civilization, but only the demise of Hispanics in the United States.

Jason Hernandez
Co-Founder of Crack Open The Door (crackopenthedoor.com),
And First Hispanic To Receive Clemency By The President Of The United States Barack Obama (life without parole plus reduced to 20 years).

One response to “Latinos Unidos: Pushing for Criminal Justice Reform Together”