By all appearances, Leticia Lebron is a happy-go-lucky teenager living in Chelsea. To her adopted parents, she’s a loving if reclusive 13-year-old girl. But Leticia has a secret: while her parents think she’s in her room, Leticia is actually roaming the streets of New York in search of evildoers to demolish.

LAK6, Leticia’s alter ego, is the latest superhero to be introduced by Darryl Makes Comics, the independent publishing house created in 2013 by hip-hop legend Darryl “DMC” McDaniels and art director Edgardo Miranda-Rodriguez. Along with other famed graffiti artists and writers, Darryl Makes Comics is creating a universe that speaks to a generation of children of color raised on hip-hop culture.

Recently I spoke with Miranda-Rodriguez, editor-in-chief of Darryl Makes Comics, about their newest heroine and the confluence of hip hop and comics in communities of color. 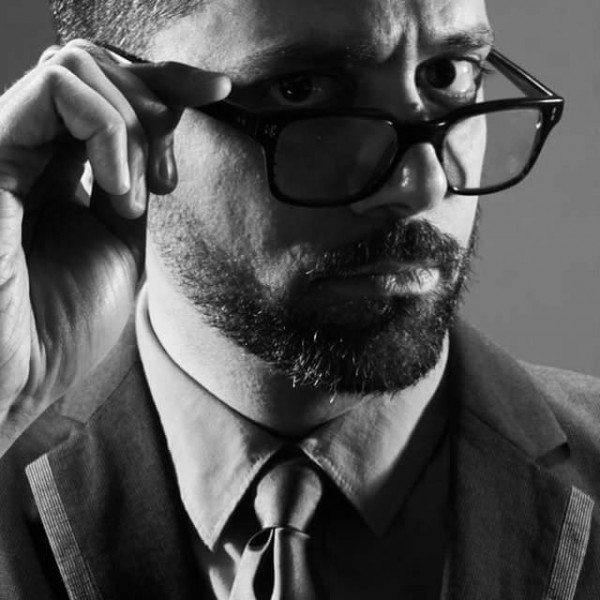 Leticia Lebron appeared briefly in last year’s DMC #1 as a brooding student who describes the title superhero as “useless” in the face of a criminal justice system designed to profit off the poor and minority groups. Did you know she would appear later issues as a heroine in her own right when that scene was being put together? How did you decide that Leticia would be the main heroine of DMC #1.5?

When we set out to make our inaugural graphic novel, we focused our energy on creating a universe that reflected a New York that was familiar to all of us. I initially had the idea of a city that looked like it was set in the 1980s because of the grittiness of the streets and the wildstyle graffiti everywhere. I was personally acquainted with many graffiti artists so I wanted them to be part of a comic book, which was never done before. I also knew that were we to create an alternate universe in which Darryl McDaniels never picked up a microphone or became part of Run DMC, it needed to be set in the 1980s to parallel the height of his music career. In this world he graduated from St. John’s University and went on to get his M.A. and became a teacher.

I used to teach high school in the early 1990s at Brooklyn’s El Puente. As an art teacher, I introduced many of my students to hip-hop culture via lessons that embraced the entire culture of graffiti, DJing, emceeing and b-boying (breaking). Many artists came to El Puente via my class, like Crazy Legs of the Rock Steady Crew a master class, Alan Ket who designed sets with students, Rob Raida who gave students a DJing demo in one of my classes, and Q-Tip who moderated a talk and freestyled with students. The classroom for me was a space where knowledge was shared from the facilitator (teacher) to the student and back again.

For DMC #1, the students in the classrooms needed to reflect the savviness of growing up in Nueva York. A student like Leticia Lebron was very real for me. She’d not only be street smart, but would also take it upon herself to educate herself on what affects her and her peers as an adolescent. We wanted all of our characters for that book to have substance and depth. As a character, DMC was a legend that needed to be brought to life by characters who themselves had interesting personalities. DMC has been quoted many times saying that his goal has always been to expand the universe and introduce more characters. He was using himself and notoriety to open doors in this fictional world similar to how he did in the real world (he brought Public Enemy to Def Jam).

We didn’t create DMC #1 with a deliberate plan to develop our characters, but it happened for us organically. These characters spoke to us. Leticia spoke the loudest. She wanted her own adventure, to step up. It felt right to give her the first try. The three of us I remember sat in that meeting staring at each other and excited about giving LAK6 her own book. I was then charged with the responsibility of putting together the team to do it.

I did an extensive search for talent and found Tula Lotay from England to work with me to design LAK6’s costume. It needed for me to look like a b-girl and graffiti writer. I spoke with Lady Pink about her design as well, who emphasized that she shouldn’t look to girly, but rather badass. I also wanted to keep her young, at 13, so that she would be drawn as a young woman. Next I brought in writer Amy Chu who first came to New York in the 1980s as a college student. Coincidentally she did a paper on Lady Pink at this time, so it was destined that she pen the script based on the short story I had come up with. I went on Instagram and the internet to find our book’s illustrator and was introduced to the work of Allison Smith who had just recently crowd sourced funds for her first graphic novel Temujin, an illustrated book about Genghis Khan. DMC #1.5 would be Allison’s debut in comic books. I went back to Lady Pink who provided all the original graffiti for the book, and brought in my friend Kristin Sorra to digitally color all of the art. 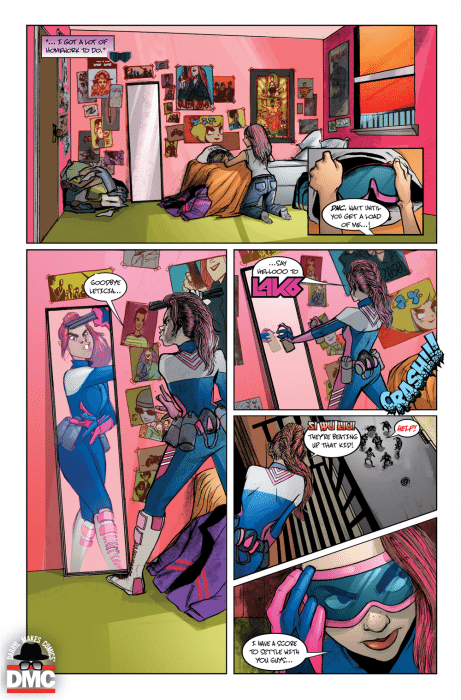 Of course Miles Morales, who’s half black and half Puerto Rican, replaced Peter Parker as Spider-Man in 2011. As for Latina superheroes, I can’t really think of any off the top of my head. Are there any you can think of, and how does LAK6’s portrayal differ from depictions of Latinas in the past?

There are a few Latina superheroes from Marvel that I’m aware of like the White Tiger, based on Marvel’s first Puerto Rican superhero of the same name created by Marv Wolfman and George Perez. In addition, a team very close to me are The Santerians created by Joe Quesada based on the orishas who were the stars of my first art exhibition with Marvel at the Caribbean Cultural Center here in New York.

LAK6 is a unique character in that she represents an amalgamation of cultures and a composite of real life women. She represented graffiti, b-girls and wing chun. Lady Pink and my madrina Iris Morales of the Young Lords were for me inspirations for LAK6, so she needed to come across as a badass. She’s also a foster child being raised by a couple in Chelsea, a neighborhood in New York that was once very much a Puerto Rican community. I purposefully picked this neighborhood to remind people of what the city was before all of the development and gentrification. If we don’t tell our stories, no one will.

You and Darryl “DMC” McDaniels are self-described nerds who spent their formative years reading comic books during the 1980s’ golden age of hip hop — something DMC senior editor Riggo “Riggs” Morales termed “b-boy geeks.” (Judging by his works, author Junot Díaz would probably place himself in that category as well.) How would you describe a b-boy geek?

Junot Díaz is a personal friend, and he and I have geeked out over comics and sci-fi for over 20 years of our friendship. He personally told me that for his book The Brief and Wondrous Life of Oscar Wao he drew direct inspiration from the Fantastic Four. Beli is the Invisible Woman, Yunior is the Human Torch, Dr. Abelard is Reed Richards and Oscar himself is the Thing. Junot and I would also go on and on about hip hop, from Wu Tang to Nas. He’s definitely a #BBoyGeek. To me, that’s a person grounded equally in all that is nerdy like comic books, sci-fi and fantasty to all that is cool like hip hop. For me it’s easy to love both because they are both rooted in escapism and role playing.

I was born in 1984, which may explain why I was less into superhero comics as a kid and more into superhero shows that exploded in the latter half of the Eighties, such as X-Men, Spider-Man, The Incredible Hulk, Teenage Mutant Ninja Turtles and Ghostbusters. Nonetheless, why do you think these characters and their stories are so popular with kids, specifically black and Latino kids often from working-class families?

Superheroes speak to all cultures generation after generation. It’s our mythology. It’s our novelas. 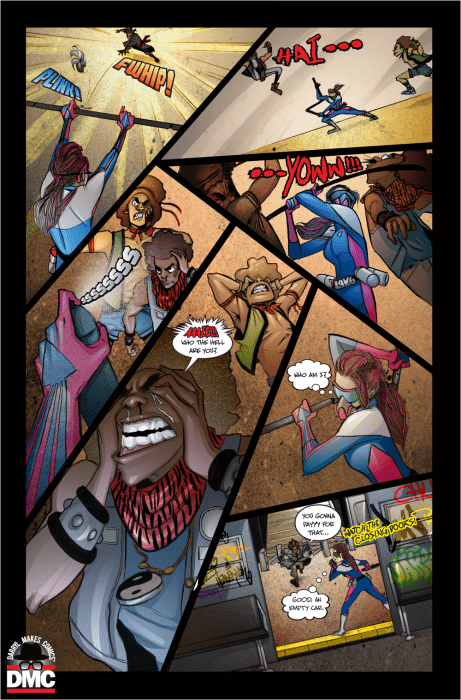 Why is it important for black and Latino children to see themselves represented in comics?

Young people of color, especially of Latino and African descent in the United States, represent a very large market share as consumers. We already buy more movie tickets and products than any other group. When we see ourselves in our products, it speaks to us on a granular level. It’s in our core, our very essence to feel the need to be represented. When children see themselves as heroes, they can accomplish anything. It’ll boost their confidence and guide them positively through life. I’m the proud father of two boys, my 11-year-old Kian and my two-month-old Ennio. My oldest son Kian loves that I create comic books. He’ll sit with me in my office on my lap and read the books before anyone does. He’ll then go to his room and start drawing his own comics and his own characters alone or when his friends come over. It inspires him and gives him the self-esteem he’ll need to succeed. That and all the love that I give him!

What’s your definition of a Latino Rebel?

I’m a Latino Rebel. I’m Puerto Rican from Nueva York, I’m grounded in my heritage and it gives me the foundation to be a storyteller and father. From comic books to films, my stories are a reflection of my identity. I don’t apologize nor accommodate anyone who struggles with my very long name. It’s my identity. Miranda is my father’s last name, Rodriguez is my mother’s last name, and Edgardo is the name they both gave me. I was raised by a single mother with my brother Axel and sister Marisol and survived growing up poor in Nueva York. From my pollo guisado to my salsa, I am a Latino Rebel.

Finally, we know that Angelique, the dominicana who is the subject of a chapter in the first book, practices the Chinese martial art of wing chun. Should we expect to see her emerge as another heroine in a future DMC?

Angelique makes an appearance in DMC #2, which premieres at the New York Comic Con, Stan Lee’s Comikaze and the UK’s Thought Bubble Festival, before becoming available in comic shops this December. She’s part of the next rollout we have planned for DMC #2.5 and DMC #3. So read on!

DMC comics are available wherever comic books are sold. To find a comic book shop near you and reserve a copy, call 1-888-COMIC-BOOK.