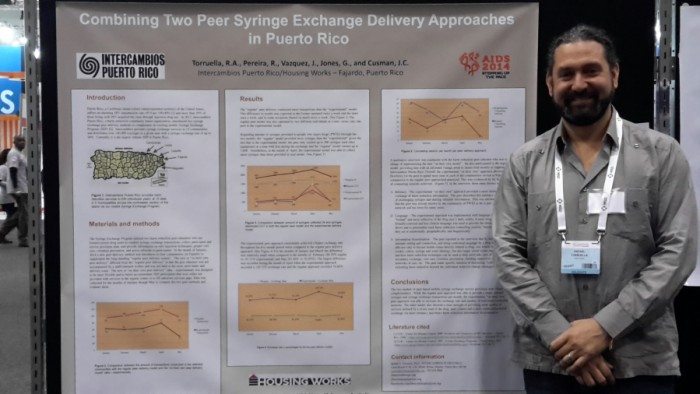 Drug policy reform is a big tent; it brings together people fighting for criminal justice reform, racial justice, individual liberty, dignity, human rights, public health and public safety. There are experts working on harm reduction, advocates fighting for an end to punitive and destructive criminal sanctions, activists pushing for marijuana legalization. We often overlap, collaborate and support each other, yet it is rarer to find someone who actively and tirelessly fights for all facets of drug policy reform, who seamlessly unites all the strands of this growing movement.

This week we are honoring Rafael Torruella, a living example of what it means to be a drug policy reformer, in the broadest sense of the term. Born and raised in San Juan, Puerto Rico, he grew up witnessing the problems associated with drug use and drug control policies; in Puerto Rico over 40 percent of new HIV infections are caused by use of contaminated syringes. Rafael knew there was a problem with the way the government dealt with drug use, with the marginalization of people who use drugs.

Ultimately, we have Rafael’s grandmother to thank for his drug policy and harm reduction advocacy. Rafael was working on a research project at the University of Puerto Rico on drug use and gender when his abuela showed him a newspaper article about syringe exchange and said, “Look, this is what people are doing about what you’re always talking about.” Rafael relocated to New York — becoming a syringe exchange coordinator for CitiWide Harm Reduction in the South Bronx — before finally returning home to set up what would eventually become Puerto Rico’s largest syringe exchange program, Intercambios Puerto Rico. Intercambios provides over 150,000 syringes a year in 15 communities in six municipalities in Puerto Rico, and operates on a peer model, with equipment and information delivered by people who formerly or currently use drugs.

For Rafael, harm reduction is about empowering people who use drugs, working alongside them, not for them. It’s about meeting people where they are at, literally. Intercambios does mobile exchanges, so that resources and information are brought into the community, not removed and inaccessible. Rafael focuses on providing education with equipment: teaching how to inject safely, how to prevent HIV infections, how to recognize a potential overdose and what to do about it. Rafael’s guiding principle is “with adequate information and resources, people will take care of their health.”

Years into his work, Rafael realized that service provision wasn’t going to change the broader system of mass incarceration and social exclusion. In Puerto Rico, laws were so severe that you could be jailed for 10 years for simple possession of cannabis in recreational areas. Based on the need for broader action, Rafael and his partners launched Descriminalización.org, a campaign fighting for decriminalization of drug use, which has made notable gains. Medical marijuana and decriminalization bills have been introduced in the Puerto Rican legislature and, in recent months, the governor issued executive orders reclassifying cannabis for medical use and making marijuana possession the lowest enforcement priority. The senate also approved an overdose prevention and naloxone distribution bill drafted in collaboration with public health activists; Rafael was among them.

Rafael believes in the power of coalitions. He is a founding member of the Puerto Rican Harm Reduction Coalition (CoPuReDa) and is expanding his work in the Caribbean, providing technical assistance for harm reduction and syringe exchange in the Dominican Republic and the U.S. Virgin Islands. According to Rafael, “We think of ourselves as Caribbean and as Latin American.” His work is indispensable in advancing reform across the region. Rafael Torruella works across countries, cultures and issues, and we are lucky to have him in the drug policy reform movement.

This is part of a series dedicated to Hispanic Heritage Month commemorating the impact made by Latino drug policy reformers.

Hannah Hetzer is senior policy manager of the Americas at the Drug Policy Alliance, based in New York. She serves as DPA’s liaison for Latin American and broader international issues, closely following, supporting and informing developments in drug policy reform in the region. Hetzer spent 2013 in Uruguay, working on the campaign that made it the first country in the world to legalize marijuana. You can connect with her on Twitter @HannahHetzer.