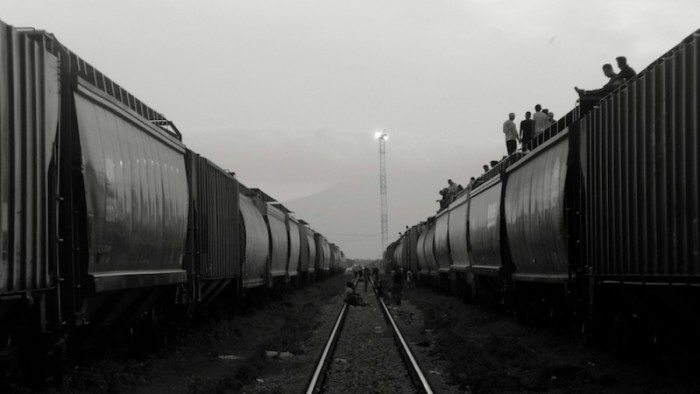 Migrants kill time in southern Mexico as they wait for the trains to depart. (Peter Haden/Flickr)

“I have given you all my money. I have given you all my body.” That’s what Monica, 36, told the drug cartel in Honduras who now wanted to recruit her 15-year-old son. Indeed, she had withstood months of rape by the cartel’s leader and paid a monthly quota to keep her own business afloat. That night, when they asked for her son, she reached the limit of what she could take. With only what they could carry, she, her son and two other kids left their neighborhood not knowing where they’d go.

I met Monica and many other refugees in southern Mexico this past summer, where I volunteered and conducted research alongside various human rights organizations and migrant shelters to better understand the refugee crisis at Mexico’s southern border.

With the exception of a few recent articles, Central American refugees have been out of the headlines for almost a year. Yet people are still desperately fleeing for their lives and facing more human rights abuses as they do so.

The result? INM-led operativos — checkpoints and raids — throughout Mexico more than doubled from October 2014 to April 2015 compared to the same period a year before. The patrols especially target refugees on top of La Bestia. Here, INM agents regularly use stun guns and physical and verbal abuse. In cities like Arriaga, Chiapas that once saw hundreds of migrants daily, the effect has been no one on top of the train and migrants instead walking more dangerous, clandestine routes to get to the next city — further increasing opportunities for local crime groups to target them. Thus, refugees fear turning to authorities, and are more than ever prey to criminals sometimes working with authorities.

Since PFS went into effect, not only have Mexico’s southern states experienced skyrocketing crimes rates against migrants, but reports of government abuses against migrants have become more common. Many refugees told me it’s not unusual for INM, police and military agents at checkpoints to intentionally profile them by their dialects and physical features. Many were then extorted for all their money in exchange for passage, only to be detained and almost immediately deported.

La 72, a migrant shelter in Tenosique, Tabasco, recorded significant increases in INM abuse: migrants entering their shelter who reported abuse went from 26 in 2013 to 322 by July 2015. Shelter director Fray Tomas Gonzalez linked 12 deaths in the area since January of this year to PFS-sponsored operativos. In one terrifying example in March, a Central American migrant drowned in a river near Tenosique as INM and Federal Police agents observed.

As the United States congratulated itself for lowering the number of apprehensions of Central Americans at the U.S.-Mexico border, from July 2014 to June 2015, the number of deportations in Mexico rose more than 60 percent. This year to date, Central Americans constitute 98 percent of the 121,260 deported from Mexico — particularly in southern Mexican states like Chiapas, Tabasco, Oaxaca and Veracruz.

The precarious nature of migrating through Mexico has always existed. However, the interdiction, detention and deportation of these refugees through PFS has criminalized those like Monica fleeing the violence, poverty, corruption and instability in Honduras, Guatemala and El Salvador. Accordingly, these Central Americans are not treated as refugees, but security threats.

Many Central Americans I met at migrant shelters desired humanitarian protection, yet were unable to qualify because of the inadequate government response by COMAR, the agency tasked with providing relief. Seemingly, the continuous increase in Central Americans seeking legal protection in Mexico and the extremely low number actually given protection reflects a policy preference for deportations.

Fleeing in Spite of Repression and Deportation

These Central Americans continue fleeing to and through Mexico because they are fighting to survive. Like Syrian and Palestinian refugees fleeing to Europe, they have nowhere else to go.

These refugees deserve a policy response that takes their humanity into account and precludes the overt securitization response dominating the southern region today. Mexico must ensure its progressive refugee policy, including its 2011 Ley de Migración, actually protects these refugees. A joint response alongside the United States must also prioritize funding and resources for humanitarian relief work in areas of Mexico where they are urgently needed.

Christopher Galeano is from the Antelope Valley in California and a recent graduate from UC Irvine. He spent this past summer conducting research and volunteering alongside various NGOs and migrant shelters in Southern Mexico. He is also a member of Resistencia, Autonomia, Igualdad, y lideraZgo (RAIZ) an autonomous grassroots migrant led organization in Orange County.

One response to “A Revolving Inferno: Central American Refugees in Southern Mexico”