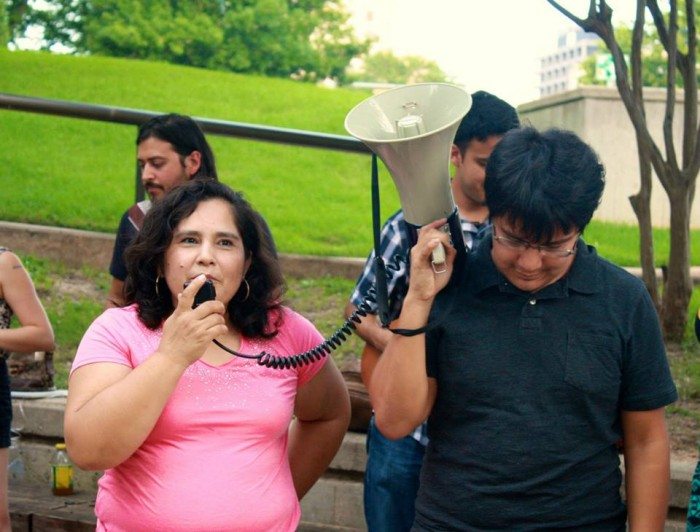 is a mother of three from San Luis Potosí who has been active in several Austin-based immigrant rights organizations, which she balances with a full-time job cleaning houses. She learned organizing and leadership development skills over 10 years with the Christian Family Movement, and became active in immigrant rights organizations after her husband was detained in 2008. She intensified her involvement locally when her husband was deported in 2013, attending lobby visits for immigration reform in D.C. and organizing with others across Texas.

“It became clear to many of us that although some national organizations were still pushing, there wasn’t going to be a reform. So we looked around and said, can’t we make change locally, so that other families don’t have to be separated?” Zuvieta said.

She helped launch the ICE Out of Austin Campaign to stop the Travis County sheriff from facilitating deportations, which recently celebrated another victory: the sheriff declined to run for reelection, and all of his rivals have denounced the deportation program. She attended Mijente’s Lánzate/The Jump Off convening last weekend in Chicago, and returned, as she described it, “really fired up.”

We interviewed her to find out why.

Why did you want to go to Lánzate?

I was curious, even though I was confused about what this would be. It sounded interesting, to meet with people from other states. And I was curious about the “j” — “Mi gente with a j” — I thought, what’s that about?

What did you think of that? And what about the terms ‘Latinx’ and ‘Chicanx’?

At first I saw it as a Chicano thing. The Mexican Americans sometimes write “Mexico” with a “j.” I thought maybe it was about that, until they explained.

I liked it because it was unusual, we’re often good at criticizing new things but we don’t always understand the background. I did hear some people saying “Mijente con jota?” But who cares about the name? What matters is the goal, and I felt like I was with family.

What happened when you arrived?

They picked me up at the Metro, and I was still wondering, what will this be? I had gotten some emails from them in advance. I’m not great at email, so I started learning about it but still didn’t understand. Normally I go to church workshops, and they’re often boring because people just talk and talk. You get tired and bored. So I didn’t know what to expect. There wasn’t much explanation in advance. It sounded good to meet people from other states, but I thought it would be professional people, people who have academic experience, and I have life experience — my experience comes from the heart. And I recognized some people from other campaigns who had worked on detention centers, so I thought that’s all we would be talking about. But I was surprised.

First of all, the language we used was comprehensible. It wasn’t academic language. It was lenguaje popular — you didn’t have to lose time trying to figure out what one word meant, and then you had lost half the conversation. And it was completely bilingual, thanks to all the interpreters.

And it wasn’t just about deportations. I loved how they introduced us to African-American issues, because we almost never get to have exchanges with African Americans [in Austin], and we have so much to learn from them. I don’t know much about their culture, and I think many don’t know much about ours, and being inclusive we’ll learn more about each other and stop looking at each other as competition, and instead as allies. There were Afro-Latinxs too, puertorriqueños.

It was also moving to hear the LGBT and transgender participants talk about their experiences, they told us about this idea that mi existir es resistir, my existence is resistance. I’d like to learn more about LGBT people; many years ago I wouldn’t even let LGBT people into my world. My kids have educated me a lot about LGBT issues, and I have more to learn. 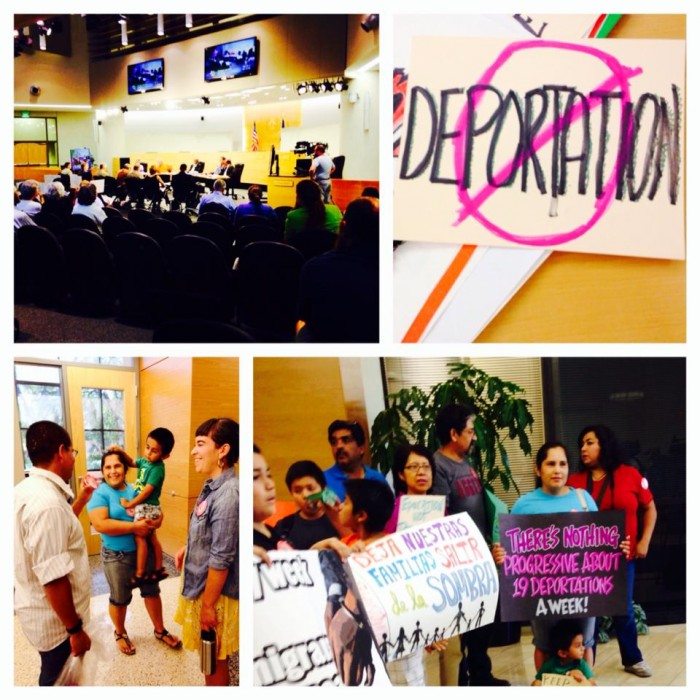 What were some of the highlights from the workshops you attended?

I loved hearing from Rodrigo with the MPL (Movimiento de Pobladores en Lucha) from Chile. What I liked more than anything was hearing about how they had organized without the government, to begin from what they wanted for themselves and their neighborhoods, and say, “Over here we want a school.” So if the government says “We’ll build you a park,” and we say “But we have a whole mountain, what we need is a school?” then we might have to fight the corrupt government to do the right thing, or we might need to build a school ourselves — those things that come from us, from the communities, those are the things that last. It really planted a seed in my mind.

That, and their example of empowerment. The government had told them they weren’t allowed to build houses because it was a “high-risk” area. So they found university professors to help them do studies to show that wasn’t true, and then trained women in the community to build the houses themselves. That way, to me, you have a house, but you also have that knowledge for life, even if your house needs repair. And I liked how they talked about the need to despatriarcar, to dismantle patriarchy at the same time as they were organizing, because they needed to have support for women leadership, and they couldn’t organize with so much domestic violence and other attacks from men.

In another workshop on detention, we talked about needing to call “detention centers” by their real name, prisons — they close people off from the world, imprison them. That’s what they are. And that industry is human trafficking. There’s no other word for making money off of holding people. Otherwise we’re just dressing up the language.

Part of why we wanted to interview you is because you have gotten to know other Latinx organizations in the last decade, you’ve been to their conferences, but when you returned from Lánzate, you immediately called Nikki to tell her how excited you were. What was different about Mijente and Lánzate?

There are other national organizations, but I don’t think they reflect as much our communities and what we need. And it bothers me that so many groups want to negotiate with the government, and the organizations go along with the idea that we should be separated into “the good ones” and “the bad ones.” What do they know about us, our culture, our talents, our needs? I don’t see very good representation for us right now. But what if organizations came from the foundation of our needs, of all the members of our community?

We talked about how important it was to be inclusive, and for that to happen in the structure of the organization. So that if there were Mijente chapters all over the country, no one can exclude anyone else. So no one could tell us in Austin “I’m going to help undocumented people, but not if they’re transgender or LGBT.” There can’t be any exclusion. That’s how we’re going to protect ourselves, if we protect each other, and don’t make exceptions.

And it’s real different to hear everyone say: the people who are impacted should be making decisions. I’ve seen a lot of the heads of organizations say they were making decisions for others, for their benefit, but they can’t know what it’s like to walk in our shoes. They aren’t impacted economically the same way. It’s not the same. So to say it should be people making decisions who have been incarcerated, or are right now detained, or have family members detained, or have lost family members to deportation, or have themselves been deported — that’s very rare. 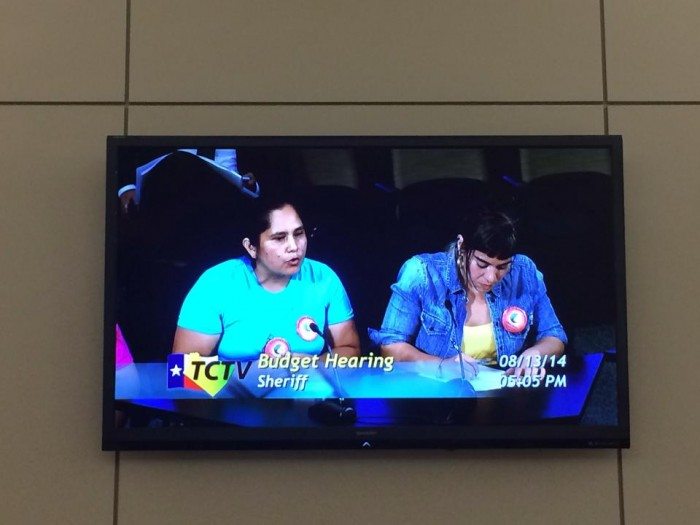 You mentioned to us earlier that you got a lot of new ideas you wanted to bring back to your organizing in Austin. What are some of those?

I left with a lot of desire to visit more organizations, both here locally and in other cities, to have deeper relationships. It made me more aware of the need to connect with Chicanx organizations in Austin, and with African Americans, to see what struggles we could fight together, and how to share luchas y curiosidades.

And we might need new ways of organizing together. There were even people from Toronto — I remember some of them proposing that we should have Mijente chapters in other cities. But I think there should be a group in each state, not just in the cities, to have power in the cities and then bring it together at the statewide level, and then nationally.

And I want to learn more from the people who went to the conference! I got to meet one of my heroes, from the organization in Philadelphia that kicked ICE out of the jail. I wanted to learn more about how California has won better treatment for immigrants there, how they got driver’s licenses. There wasn’t time. But I did have more time than I expected, because I got to take my son to the childcare center at the conference.

Right now, of course, I want to finish this campaign against Sheriff Hamilton, and to make sure the next sheriff follows through on his promise to end the deportation program. We’ll hold a candidate forum in February to help with accountability. And our chief of police, Chief Acevedo, claims the Austin Police Department doesn’t have anything to do with deportations, but there’s more he can do. So we’ll need to figure out a plan for him.

Andrew Willis Garcés is a trainer with Training for Change/Talleristas por la Justicia. You can follow him on Twitter @awgarces.

Nicole Marín Baena is a loan offficer with the Southern Reparations Loan Fund.

One response to “Curiosidades y Lucha: An Interview with Carmen Zuvieta About Mijente’s Lánzate/The Jump Off”