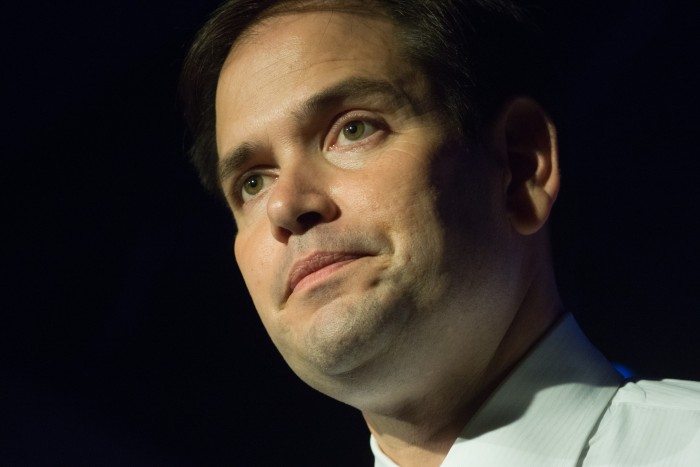 Last semester I had a young man turn in an assignment in which students were instructed to write to a current presidential candidate. This particular student had been outspoken and one of the more socially aware and progressive students in the class. He has a leadership position in a Latino fraternity, and often attempted to find commonality between the plight of African Americans and people of Latino (Latinx) origin.

His paper was interesting to say the least. He directed his letter toward Marco Rubio and expressed disgust that Rubio could be the one to break the glass ceiling for Latinos in this country. He went as far as to refer to Rubio as a ‘sellout.” My comments to him may seem obvious to some, but fundamentally call into question the designation of “Latino” and whether brownness conflicts with whiteness. The young man who completed the assignment is of Brazilian descent, but identifies as strongly as Latino, which is evidence that Latinos are not bound by language. In addition, Latinos are of many different racial backgrounds, and many identify as multiracial. Many Latinos are politically astute, but are far from a political monolith unlike African Americans, who tend to vote as a solid bloc.

Rubio is young, charismatic and intelligent, but a reactionary conservative. He opposed the Employment Non-Discrimination Act, which provided protection from employment discrimination for the LGBTQ community. He opposes amnesty for undocumented people and has stated that those who are currently in the country without documentation should be barred from receiving green cards for a full decade. Rubio also voted against the Paycheck Fairness Act and the Violence Against Women Act. Senator Rubio seems moderate when juxtaposed with fellow Latino candidate Ted Cruz. Some would say that Rubio and Cruz are indeed sellouts. However, in order to sellout, one must first buy in.

Rubio in particular is Cuban American and was born in Miami. According to Devyn Spence Benson, many of the Cuban exiles like Rubio’s parents who left in the midst of the Cuban Revolution were “white and affluent Cubans who resented the government plans to change society,” and many were swayed to leave the island by Castro’s desire to eliminate racial discrimination.” Furthermore, we in academia often love to group all Latinos as “Brown” people, adopting the language of the Chicano Movement of the 1960s. However, a non-Black Cuban in South Florida is racialized very differently. They are more ethnic whites than people of color. All Cubans are not the same either. Research suggests that a wage gap exists between Black Cubans and white Cubans. Many of the former were so called “Marielitos,” and encountered racism after their arrival even from the established Cuban community in Miami. A 1987 New York Times article stated that “the black Cuban finds himself feeling like an outsider among his fellow expatriates.”

While Rubio rails on about entitlement culture and how the War on Poverty programs were a failure, he fails to recognize that Cuban refugees received financial assistance from the government, unlike any other immigrant group. The presidential hopeful has little sympathy for people fleeing violence in Central America, while Cubans are given automatic political refugee status and asylum. Over the years, more repressive regimes were found in Haiti and the Dominican Republic, but they were never treated with the same concern by the United States.  Needless to say, the majority of people coming from the aforementioned countries would have been of African descent.

When white Cubans gained power in South Florida, their brand of conservatism “indirectly discouraged the efforts of Civil Rights and Black Power activists pushing for radical socioeconomic justice.” Rubio is a product of segregated Miami-Dade, which quickly became dominated by white Cuban exiles who were accustomed to segregated social clubs and wealth and education being all but exclusively in the hands of whites on the island under Fulgencio Batista. His reality and experience is a far cry from the Chicanos on Whittier Boulevard in Los Angeles and the Boricuas on Third Avenue in East Harlem.

William Garcia mentioned the fact that before Star Trek featured television’s first interracial kiss, people across the nation tuned in to watch Lucy Ball’s hijinx and the reaction of her hot-tempered Latin husband. Even then, Desi Arnaz was viewed as an ethnic white man (despite the fact that his music was distinctly Afro-Cuban).

Marco Rubio is indeed not a sellout. He is a product of old conservative Cuban-American ideology and ethnic white privilege. He and Cruz complicate Latinidad and the idea that all Latinos are people of color, and the concept of a singular “Latino vote.” Their presence absolutely should make us question the idea that “Brown” is synonymous with all people of Latin American origin. While Rubio extols “traditional values” in his political advertisements, one must wonder what traditions or whose values he intends to uphold or protect. They won’t be those of Carlos Cook, Pedro Albizu Campos, or Cesar Chavez. They will be the traditional values of Ronald Reagan, who bears responsibility in the deaths of hundreds of thousands of Brown Central Americans. They will be similar to the traditional segregationist values that gripped Florida prior to the arrival of the Cuban exiles and made it so that Latino icon Roberto Clemente had to eat meals on a bus during spring training.

Marco Rubio is the establishment candidate and has just received a key endorsement from South Carolina Senator Trey Gowdy. Gowdy is the same racism-denying lawmaker who grilled Professor Deborah Ramirez and stated the race blind retort, “All Lives Matter.” He famously argued with immigration activists and is popular among conservatives for sticking it to anyone who advocates for Black people and immigrants. However, Gowdy does not see a difference between himself and Senator Rubio, which is telling about the larger perception of the latter. They believe his Latinidad will not be an obstacle to win over the GOP base of whites in the Deep South and Midwest.

Cuban young people are changing and creating a political shift in South Florida. They are now generations removed from the revolution and are more concerned with U.S. domestic issues than with Castro’s Cuba. Many were willing to vote for a left-wing African American in the last two presidential elections, which says that this demographic is not necessarily a lock for Senator Rubio. We maybe witnessing the browning of the South Florida Cuban community. However, Rubio simply puts a young face on old values and privilege. His Cubanidad (Americano) is undeniable, but he is certainly more leche than cafecito.

Jason Nichols is an academic and artist with a range of interests, which include Black masculinities, hip-hop music and dance, bullying amongst emerging adults, and Black and Latino identities and relations. He is a full-time lecturer in the African American Studies Department at the University of Maryland-College Park and the current editor-in-chief of Words Beats & Life: The Global Journal of Hip-Hop Culture, the first peer-reviewed journal of hip-hop studies. Dr. Nichols is also a rap artist who raps under the moniker Haysoos and is one half of the internationally recognized rap group Wade Waters.