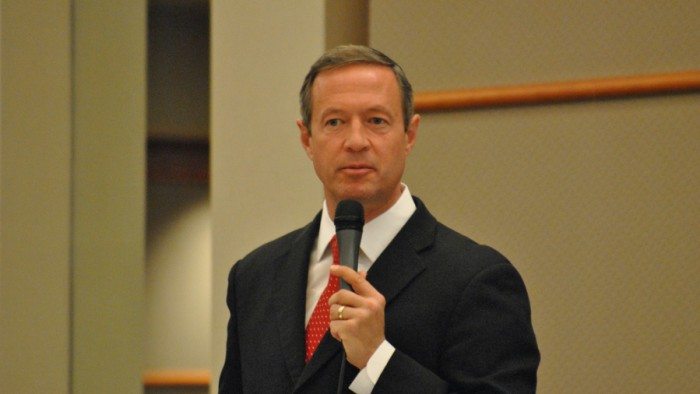 An earlier version of this post appeared on Commentary & Cuentos.

The next day, in the Des Moines Register, Karina Alvarez, an Iowan immigrant-rights activist, explained why “she was switching her vote from Sanders to O’Malley.” After explaining that Sanders’s voted against immigration reform, went on Lou Dobbs Tonight and spoke about immigrants taking jobs from Americans, and defending the Minutemen, a gun-toting rightwing vigilante group that claimed to defend the border from an invading horde, she decided that O’Malley was the “only one with the record that our community needs.” Even Christian Ucles, the political director for the Iowa branch of the League of United Latin American Citizens, who spoke cynically about the Hispandering prevalent in the state in Vasilogambros’ article, was impressed by Martin O’Malley’s Latino outreach efforts.

This may come as a surprise to many voters. After multiple Democratic debates in which most of the attention was focused on Clinton and Sanders, why would Spanish-language newspapers in Iowa endorse Martin O’Malley? Why would Latino activists be choosing O’Malley, the Democratic dark horse? His polling numbers are anywhere from one to three percent nationally, and  he almost did not make it into the Democratic debate on January 17, 2016, with his numbers sitting at 6 percent in Iowa. The endorsements and Vasilogambros’s article make clear that O’Malley is paying attention to Latinos. But why has this affable, attractive and capable politician remained on the political margins?

O’Malley was the mayor of Baltimore, Maryland for seven years where he navigated the racial politics of a city plagued by crime, poverty and segregation. In 2006 he was elected the governor of Maryland. As governor, he signed bills for marriage equality, voting rights, and helped pass the statewide DREAM Act for unauthorized students to attend institutions of higher education at in-state tuition rates. He also presided over the end of the death penalty in Maryland. At the end of O’Malley’s term, José Aristimuño, director of Hispanic Media for O’Malley, told me that Latinos in Maryland would say that O’Malley “tiene un corazón inmigrante.”

After decades in the political arena, O’Malley’s history is loyally Democratic and his record is solidly progressive. His presidential promises are no different. O’Malley lays out 15 goals that will make the U.S. better and stronger on his campaign website. Those goals vary from the politically safe — full employment for veterans, reduced infant mortality, and criminal justice system reform — to the political envelope-pushing — 100 percent renewable energy by 2050, reorganized and regulated banking industry, corporate anti-trust break-ups, and citizenship for unauthorized migrants. His safer appeals are part of every Democrat’s agenda: campaign reform, higher education reform and affordability, ending childhood hunger, and strengthening the middle class. It seems that this is O’Malley’s problem. He sits between Sanders on his left and Clinton on his right. He is not the establishment politician like Clinton, nor is he the outside firebrand like Sanders. He has neither the money of Clinton nor the message of Sanders. While O’Malley has strong ideas, they are lost.

Surprisingly, O’Malley has led his two other rivals in nearly every issue dealing with Latinos, including immigration. As a presidential candidate, his first interview was with María Elena Salinas, co-host of Noticiero Univision. His first campaign event was with the Hispanic Chamber of Commerce. Back in June of 2015, César Vargas, a migrant rights activist, said O’Malley was the candidate with the “only proven record” on immigration and immigrant rights. He continued to say that he “fought for it when there was no election.” That was before Vargas took a job as Sanders’s national Latino outreach strategist.

Later that month, O’Malley was the first to speak out against Trump on America with Jorge Ramos. In July he released a detailed comprehensive plan to fix the immigration system, giving a clear pathway to citizenship for millions of unauthorized migrants. In response to the details of the plan, Ramos tweeted that O’Malley had the “most inclusive immigration plan so far.” O’Malley was also the first to accept the invitation to speak to the National Council of La Raza. And O’Malley was the first Democratic candidate to visit Puerto Rico on an official campaign stop in August 2015.

In October of 2015 the CEO of the Hispanic Chamber of Commerce praised O’Malley’s immigration plan, saying that it was “frankly, the best plan I’ve seen.” Political commentator Raul A. Reyes wrote later that month that O’Malley deserved the attention of Latino voters. “O’Malley has made reaching out to Latinos a cornerstone of his campaign,” Reyes wrote. He added: “O’Malley treats Latinos with respect, so we should be willing to consider his candidacy.”

And, in another showing of initiative, O’Malley was the first to issue a statement against Obama’s increased deportation raids at the beginning of 2016.

To the Latino community O’Malley has been saying and promising all the right things. He does not use the terms “illegal immigrant” or “undocumented immigrant.” He prefers the term “New Americans” or “new American immigrants” to combat stereotypes of criminality and to highlight them as good people and people that contribute to the nation. Yet a poll by Univision Noticias shows that 74 percent of Latinos do not know or have no opinion about O’Malley. Sanders does not fare much better, as 68 percent do not know or have no opinion about him. Clinton, however, has a 68 percent favorable opinion among Latinos. Why? 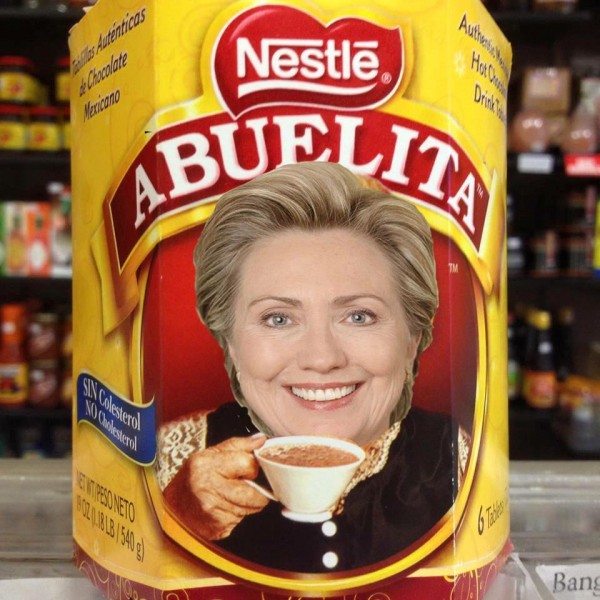 Clinton’s campaign has been riddled with Hispandering missteps, everything from incorrectly placed accent marks, to trying to portray herself as similar to Latinos’ abuelitas. That unfortunate listicle created a widespread response in the form of a hashtag: #notmyabuela. She has hired many Latina and Latino staffers, and her campaign is flush with money. But when asked about her connections to Latinos, she has to reach back decades to voting registration drives in South Texas during the 1970s or her run-ins with Mexican migrant children in Illinois in the 1950s. Her name recognition combined with influential endorsements from Julián and Joaquín Castro, rising political stars in Texas, seem to be carrying her in the polls.

Sanders, who is far from a socialist at this point, is really an updated New Deal liberal. Counter to what many political strategists would have guessed, it seems that his socialist brand is actually helping him among young Millennial voters who were born into a post-Cold War world. They do not have the ideological hang-ups with the term like older generations do.  That brand gives Sanders an edge by making him the edgier, more revolutionary option, although with Latinos he tries to portray himself as their “Tío Bernie.” While Sanders’s class-based policy solutions have won him support, those same policies historically have left racial minorities out of economic growth. Sanders has drawn criticism from Latinos, Black Lives Matter activists, and even Ta-Nehisi Coates.

But even with the polls counting him out, O’Malley still seems to be counting on Latinos. Aristimuño, O’Malley’s director of Hispanic Media, believes that the polls do not tell the whole story because they don’t capture the reality of the Latino community. As many in Iowa have made clear, O’Malley has the most extensive outreach to Latino voters of any campaign, Democratic or Republican. O’Malley has personally travelled to 60 of the 99 counties in Iowa. Gabriela Domenzain, senior advisor to O’Malley, recently finished a 10-day swing in heavily Latino counties.  The campaign takes pride in the fact that they have talked to people that others haven’t spoken to. When it comes to Latinos and Latino issues, Aristimuño says “the Governor, Gabriela and I have been driving the conversation since day one.”

The O’Malley campaign seems to be the only campaign that has built Latinos, Latino issues and Latino messaging into the foundational structures of its campaign. O’Malley tweets in Spanish and English from his main Twitter handle, not just his Latinos For O’Malley group. The campaign speaks to Latinos from its main organs. Domenzain serves as a senior advisor, not just a Latino advisor. Although other campaigns have made high-publicity Latino appointments, Aristimuño points at that “just because you hire Latino activists, does not make you pro-Latino.”

Many of the positions that O’Malley has taken regarding immigration are in places that do not have a large Latino electorate. He pushed for licenses for unauthorized migrants and a statewide DREAM Act in Maryland, of all places. He speaks about immigration to non-immigrant audiences. He speaks about Latino issues in non-Latino audiences. Yet, he lags in all the poles. How is this possible?  What does a campaign do when they do all the rights things and it doesn’t work? What does a campaign do when it stops Hispandering and starts pushing Latino issues, and it backfires?

O’Malley has not had any of the missteps dealing with the Latino community that his rivals have. He has not misspoken or failed miserably at speaking Spanish. Is Martin O’Malley the unfortunate victim of the lack of Hispandering? O’Malley’s Latino strategy may point to a deeper issue in American politics: the growing chasm between the social presence of Latinos and their actual political power. Nonetheless, the fact that a presidential campaign decided to take issues affecting the Latino community seriously by developing serious policies to address them seems to mean something is changing in American politics. That is a good thing. O’Malley may be planting seeds in Iowa that he or others must harvest later.

When I asked Aristimuño if O’Malley was not polling as well because they had failed to Hispander, he said “maybe.” He said that O’Malley can play “La Bamba” on the guitar, but that you wouldn’t see him do it at a taqueria somewhere. He said that his job was not “to make [O’Malley] a little browner, [or] teach [him] Spanish.” Instead, his job was to make sure that the Latino community heard about O’Malley’s policy positions. When asked the message that the O’Malley campaign would like the Latino community to hear, Aristimuño said: “Very simply, look at what each candidate has done. That will give you an idea of how that person will govern as president. Martin O’Malley has the only proven record.”