Despite having her candidate win the Nevada Caucus yesterday, labor activist Latina icon and Hillary Clinton supporter Dolores Huerta is now the center of a controversy, which started when actor America Ferrera and fellow Clinton supporter tweeted the following yesterday around 5:07pmET:

Ferrera’s tweet went viral rather quickly, and soon enough people online were searching for what actually happened. It is not clear if Ferrera was actually at Harrah’s when her profile tweeted what she said happened to Huerta. Many people found a public Facebook post by Delia Garcia, whom according to Think Progress, “is a former Democratic state representative in Kansas…serving as a Caucus Precinct Captain Assistant and Observer for the Clinton campaign.” The video was up on Facebook for about an hour before it was deleted. This was the screen grab: 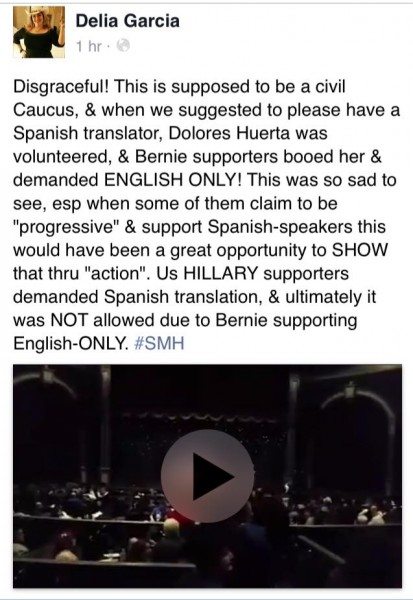 The video in question, which at the time was also deleted, was located by our founder @julito77, who posted it on his Facebook page. The barely audible video includes shouts of “neutral,” but it is hard to determine if “English only” was said.

I offered to translate & Bernie supporters chanted English only! We fought too long & hard to be silenced Si Se Puede! #ImwithHer #NVcaucus

Later in the evening, actor and Bernie Sanders supporter Susan Sarandon tweeted this to Ferrera’s account:

.@AmericaFerrera I was there. Nobody frm Bernie's side said English only. Moderator did when no neutral translator was found@DoloresHuerta

There’s also a video showing Sarandon confronting Huerta before the caucus. In the video, Sarandon tells Huerta about Clinton’s record as a “Wall Street Candidate.”

Meanwhile, Huerta spoke to reporters in Las Vegas about what said happened:

Many outlets, including CNN and HuffPost, included quotes from Huerta. This is what CNN reported:

“What happened is the person who was running the caucus said we need a translator and he said the first person that comes to the stage can be the translator, so I walked up to the front and then some of the organizers, the Bernie organizers, decided to shout ‘no, no, no.’ Then a Bernie person stood up and said, I can also do translation. So then the person running the caucus said we won’t have a translator.”

She added, “Then some of the organizers were shouting ‘English only, English only.’ This is bad.”

Buzzfeed reported that two unnamed sources not connected to the Clinton or the Sanders campaign did say that “Bernie Sanders supporters chanted ‘English only!'” at Huerta, although it also said that “video of the event has been unclear, however.”

Then there is this tweet from Sarandon, which happened around 9:42pmET:

A clip from that full stream was sent to Latino Rebels. In this part of the stream, it appears that only person who says “English only” is the caucus moderator, although it is still unclear if actual “English only” chants happened near Huerta:

Other people who were at that caucus vote have offered different accounts. US Uncut reported. This is part of what eyewitness Erin Cruz, who told US Uncut that she is an independent observer, said:

Once [the moderator] got started he said he would like somebody to translate. Immediately, the Hillary camp starts ushering up Dolores Huerta, who is a prominent Latina activist, and very outspoken for Hillary. We were yelling for the process to stay neutral, taking objection because we felt there should have been a translator, but it should have been someone undecided, not someone for Bernie, or someone for Hillary.

Another eyewitness, Sarah Falanga, a nurse who was supporting Sanders, said this to US Uncut:

An older lady, who was a part of Hillary’s team, went up. We said no, there needs to be a neutral party translating so we don’t get anything wrong. So the caucus chairman said, we’re going to do this in English. All we said was we need a neutral party to be up there.

Huerta also spoke with Univision Noticias and said the following in Spanish:

I don’t feel that Sanders’ people respect our community. They stopped the people from having a [Spanish] translation in something as important as these caucuses that are taking place. They are showing that they don’t respect us.

In the past few days, Huerta has been highly critical of Sanders and very supportive of Clinton:

Hillary has been with the Latino community since she was a young woman; many, many decades before she thought she was going to run for the presidency. She’s shown that she cares a lot about people. She’s got a lot of compassion.

And we haven’t confirm the incident with Dolores Huertas but we of course do not condone any type of sexism or racism to anyone. Our strength lies in respect to each other, and we cannot be like the Donald Trumps.

That has led many Latino supporters of Sanders to criticize Huerta, including that her foundation has received money from the Clinton Family Foundation. Here is just a sample via Twitter:

@ra_dical @latinorebels I find Huerta's tweet about the event an inaccurate representation. She has been paid a lot of money by the Clintons

@aprilrenae @latinorebels if you want to know why the uproar was happening, she was breaking Nevada Caucus Rules pic.twitter.com/vatxTOXb1N

There are also questions as to why Nevada caucus organizers didn’t have translators on site in the first place:

@ra_dical @latinorebels The individuals who shouted against a translator were in the wrong. Event should've planned that in advance.

Huerta also has her online supporters:

@latinorebels @RNorredor @apadilla86 You guys are acting as if she was going to speak some magic Spanish words to control people's minds.

@latinorebels Lifelong civil rights activist, 85, is not lying. Her account is accurate https://t.co/qWDevpG44w

Latino Rebels Radio had Huerta on our show to discuss what happened.

UPDATE: García, whose video started it all yesterday, has now posted this on her Facebook page today: 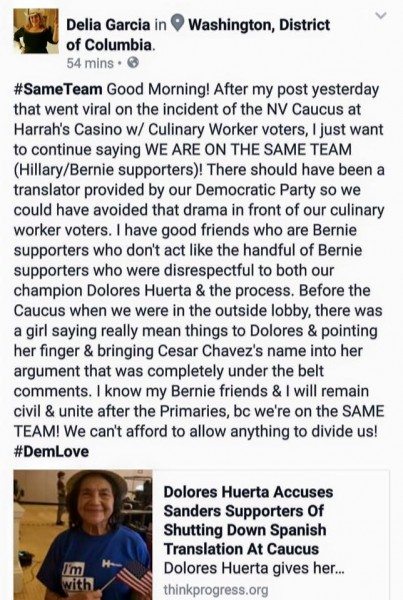 2 responses to “Dolores Huerta’s ‘English Only’ Moment at Caucus: What Happened Last Night in Las Vegas?”