The Black History of Latinos 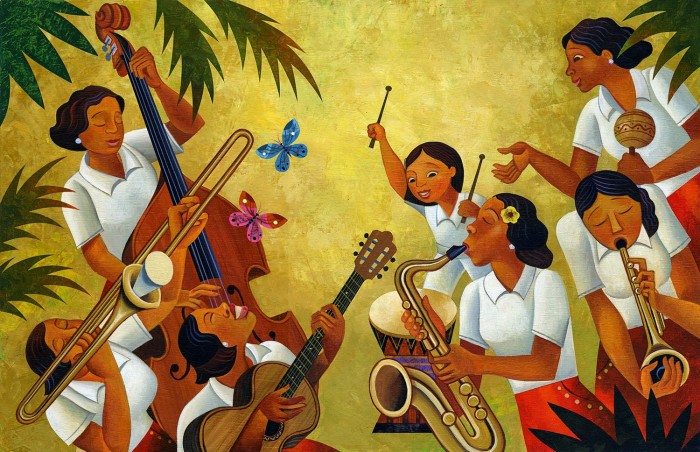 This article was first published by Gozamos.

At least twice a day in my reading I come across the phrase blacks and Latinos, as though the two categories were mutually exclusive. As a black Latino myself, I know they aren’t, and yet even I use the phrase on a regular basis, mainly out of convenience; non-Latinos of mostly African descent and people of Latin American ancestry who don’t consider themselves black is just too clumsy a phrase for any writer. But despite one’s own awareness of how the terms overlap, constant repetition of the phrase blacks and Latinos leads many Latinos to forget what they should already know — a lot of Latinos are black. (In fact, in some Latin American countries, most people are black.)

Blackness is a major part of latinidad, of what it means to be Latino. Blackness is as much a part of Latino identity as the brownness of the indigenous or the whiteness of the Europeans. It’s in the music Latinos sing, the food they eat, and in the stories they tell each other. The national cultures of places such as Cuba, Puerto Rico, the Dominican Republic and Colombia are unimaginable without their African ingredients. Nonetheless, most Latinos observe Black History Month at arm’s length, as if it were strictly a celebration of black culture, having nothing to do with Latino culture. But Latinos have a black history.

It being a presidential election year, we’ll hear some blacks and Latinos (there I go again) urging their peoples to bridge the supposed gap between the their communities. I’ve never understood where this proposed bridge might be built, because as a black Latino, I stand with one foot in so-called black America and the other in so-called Latino America, like a 21st-century Colossus. Thus, I see no need for a bridge.

Admittedly, though, there are days when I do feel more black than Latino, though I’m not sure what that means, or if it’s even possible to feel such a way. After all, if there’s no boundary between black and Latino — no real distinction between what it means to trace your history to Latin America and what it means to trace your history to Africa — then I can’t possibly feel more black than Latino on any given day. Sure, the Spaniard in me can trace his roots to the Iberian Peninsula in Europe. And the Maya and Taíno in me can trace their roots to the Chukchi Peninsula in Siberia. Ultimately, however, everyone on the planet can trace his or her roots to the East African Rift.

That I feel more black on some days and more Latino on others is proof that I am both all the time. It’s only society which has taught me that blackness is something distinct from Latinoness, and that feeling bonded to black culture is completely incompatible with being Latino. It’s society which tries to convince me that I feel more black on Friday than I do on Sunday. This is the great historical lie planted at the heart of latinidad that has only recently begun to be uprooted. There has never been any difference between blacks and Latinos, no more than there is between whites and Latinos. Estevanico and Juan Francisco Reyes are as much a part of black history as they are Latino history. So, too, are Arturo Schomburg, Don Pedro, Junot Diaz, Edwidge Danticat and Esperanza Spalding. (Yes, Haitians are members of the Latin American family, too.)

Even for those Latinos who can’t claim a more recent African lineage than 200,000 years ago, Black History Month should be a celebration, a monthlong grito, for a group of people whose experiences in this New World has been both very similar and also very different from those of Latinos. Black people are the descendants of men and women and children dragged across an ocean in chains, of centuries of entire generations bred, raised, worked and broken under threat of the whip. Latinos — namely those who aren’t black, and especially those with indigenous blood — are the survivors of an equally gruesome past, of whole civilizations wiped out by smallpox and greed: one a sickness of the body, the other a sickness of the soul. Both blacks and Latinos (for lack of a better phrase) are the victims of European expansion, white supremacy, Christianity and capitalism. Blacks and Latinos are blood brothers, if not for the blood in their veins, then for the blood they’ve shed.

3 responses to “The Black History of Latinos”