Fear and Loathing and the Supreme Court 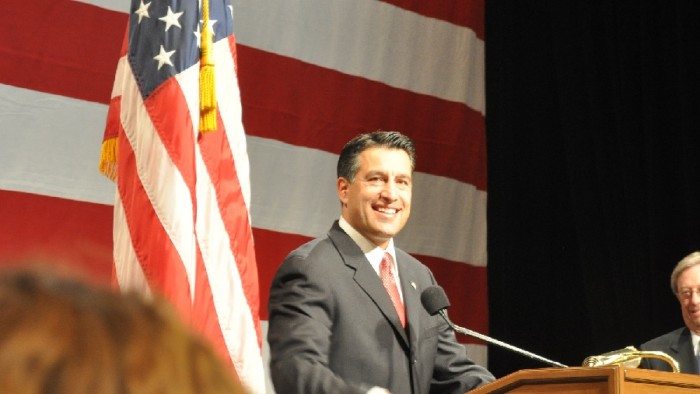 National politics correspondent Mike DeBonis and White House bureau chief Juliet Eilperin at the Washington Post reported yesterday that President Obama is vetting Brian Sandoval, the Republican governor of Nevada, as a nominee to replace the late Justice Antonin Scalia on the Supreme Court. A spokeswoman for Mitch McConnell, the Senate majority leader, immediately took to Twitter to quell any hopes that Senate Republicans would reverse their decision to hold off voting on any nominee till a new president is sworn in next year. Within hours of Scalia’s untimely death on February 13, McConnell and other Republicans began warning the president not to nominate a replacement. Their reasoning: It’s an election year and Obama’s already got one foot out the door. “I can now confidently say the view shared by virtually everyone in my conference is that the nomination should be made by the president who the people elect in the election that is underway right now,” Senator McConnell stated on Tuesday. Thus it seems that, according to the GOP, the Constitution should be slavishly adhered to only some of the time.

Born in Northern California of Mexican descent and raised in Reno, Sandoval graduated from Ohio State’s law school and went on to become a Nevada assemblyman in 1994, the youngest chair of the Nevada Gaming Commission in 1998, attorney general of Nevada in 2003, a federal district judge in 2005, and governor of Nevada in 2011 — defeating Clark County chairman Rory Reid, the son of Senator Harry Reid, by more than 10 points. Viewed as centrist, Sandoval’s name has been floated for a number of offices over the past few years, including as a possible VP pick or even presidential nominee. Early last year, with Sandoval’s brand at an all-time high, the Republican Party began toying with the idea of having the governor challenge the Senate minority leader for Nevada’s seat.

Sandoval is a moderate Republican: he supports a woman’s right to choose, an LGBT person’s right to love, a pathway to citizenship for undocumented immigrants, and Obamacare. Last year he signed a number of education bills that expanded funding, offered incentives to teachers to work in underprivileged schools, expanded preschool and full-day kindergarten, shrank class sizes, and increased special-education funding. He even signed a bill requiring Nevada Highway Patrol officers to wear body cameras. Still, Sandoval is a conservative, or at least as conservative as Obama is liberal. Upon initially taking office, for instance, the governor proposed pay cuts to state workers and the largest cuts in education funding in Nevada’s history — meaning he hurt education before he helped it. Then, in December, he ended subsidies for solar energy, which saw a solar panel company owned by tech magnate Elon Musk leave the state, taking over 500 much-needed jobs with it.

“So, what’s going on?” asks Huffington Post writer Jason Linkins with regards to the Democratic Obama’s pick of the Republican Sandoval.

There are a few possibilities.

Linkins believes the third rationale is the most likely, but I think it’s a combination of two and three. By nominating a Republican — though Sandoval may be a RHINO these days — the president hopes to wedge the GOP between a rock and hard place: either the Republicans approve Sandoval now, getting another Republican on the court but removing the vacancy as a campaign issue this fall, or they reject Sandoval and come across as stubborn saboteurs of government. Obama is either an evil genius or an evil idiot. Granted, even a hopeless leftist such as myself can admit that a Justice Sandoval wouldn’t be so terrible an outcome, and would be a marked improvement from the ultra-conservative Scalia. But tapping a moderate Republican like Sandoval is something George W. might’ve done in 2008, when the former president was staring down his last days in office and the Democrats controlled both chambers of Congress. Bush is a Republican, however; Obama isn’t (perhaps someone should remind the president of that fact). As a general rule, left-of-center presidents should always nominate left-of-center candidates to the Supreme Court.

Then again, maybe President Obama believes the Democrats have a good chance of losing the White House this year — especially if Latinos and young people decide, yet again, that they have something better to do than head to the polls. Should that occur, a Supreme Court nominee chosen by a President Trump or President Cruz will make even moderate Republicans like Sandoval wish his party had taken the bait currently being dangled by Obama.

Meanwhile, as U.S. Senators struggle to fulfill their constitutionally mandated duties, Puerto Rico’s Senate just did something unimaginable in U.S. politics, appointing Maite Oronoz Rodríguez, a 39-year-old lesbian, chief justice of the island’s Supreme Court. No colony needs a lesson in U.S.-style democracy when it shows progress like that.

One response to “Fear and Loathing and the Supreme Court”