The Talk of the Brown 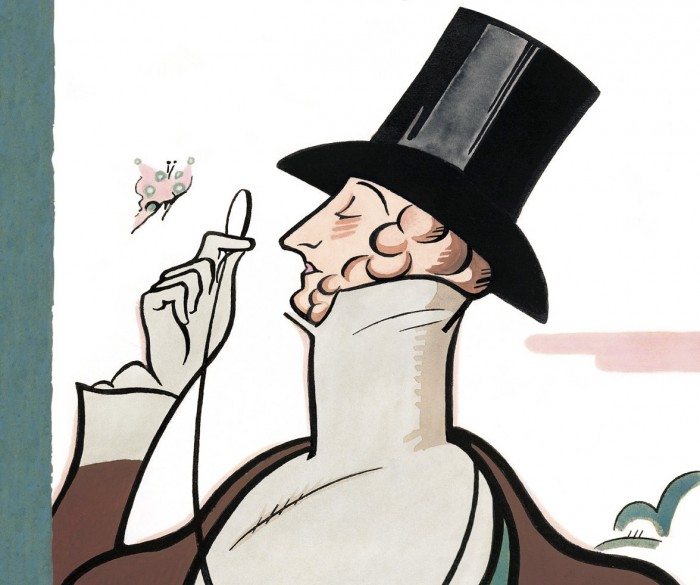 Hispandering is alive and well. Coca-Cola, Hillary Clinton, Rafael Edward “Ted” Cruz, and many more have been guilty of it. It is not surprising that there has been an uptick in Hispandering, but it has reached new heights. It has reached the hallowed pages of the New Yorker, a magazine that has set the standard for long-form journalism, in-depth features, and clear writing.

The New Yorker’s style and presence have defined high-brow urbane cultural sophistication for nearly a century. Through E. B. White’s additions to William Strunk’s Elements of Style, students across the nation for generations learned the standards of writing through a classic New Yorker style. Time even described Strunk & White, as it is commonly known, as “a timeless reminder of the simplicity of proper writing.” While the magazine has been in publication since 1925, Latinos have been absent from its pages for most of that time.

Some Latin American authors, like Gabriel García Márquez, have published short stories in the New Yorker and more recently U.S. Latino authors like Junot Díaz have also been featured. There have been profiles of influential Latinos like award-winning playwright Lin-Manuel Miranda and journalist Jorge Ramos. While Miranda and Díaz have won accolades, and deservedly so, it is important to note that they have been able to garner the attention of fellow New Yorkers and Northeasterns. Miranda’s and Díaz’s New York and New Jersey settings make them seemingly universal and legible for an uninformed audience. (Although in the opening number for In the Heights, Miranda has to give his audience of fellow New Yorkers directions to Washington Heights: “Get off at 181st and take the escalator.”)

While both of Miranda’s plays were award-winning, they received mixed reviews by Hilton Als, the New Yorker theater critic.  In a March 31, 2008 review, Als reviewed both Drunk Enough to Say I Love You and In the Heights, writing 1,200 words on the former and only 204 words on the latter. He explained that In the Heights was a lesser West Side Story which, like the classic musical, hid homoeroticism beneath layers of hyper-masculinity. Als concluded that Miranda “brought little that is new” to Broadway. In his over 1,700-word review of Hamilton, Als did not shower praise upon Miranda’s work. He wrote “‘Hamilton’ is the work of a more mature artist, for sure, but one who’s fearful of being kept out of the white boys’ club of the American musical.” According to Als, Miranda pulled his punches, burying critiques of American society “under a commonplace love story.”

Als’s review of Miranda’s oeuvre, while not as dismissive, was not that dissonant from John Simon’s 1979 review of Zoot Suit in another New York publication, New York Magazine. Zoot Suit was the first play to be performed on Broadway that was written by a Mexican American and only the second to be performed that was written by a Latino. Simon’s review alluded to West Side Story with the title “West Coast Story,” and was aided by a list of glossary terms of the English/Spanish slang of the 1940s printed in the playbill. He wrote, “The acting is hard to evaluate, since the writing is mostly pendejadas …. I myself could latch on to merely one line in all this puro pedo.”

On the whole, however, Latinos have not been present in the New Yorker. Diaz’s and Miranda’s inclusion and their celebration by white critics has to do with the way that their stories fit into a New Yorker parochialism that parades as cosmopolitanism — New York is a global city, so New York is at the center of the world. Until recently, the New Yorker has not dealt with the Latino community journalistically. Perhaps Latinos were too busy filling in the vast space between New York and Los Angeles for them to notice. After all, it wasn’t until 2015 that New York got “Tex-Mex” food. In a surprising admission of their lack of knowledge, they referenced a Texas Monthly article on the proper pronunciation of queso. Their unfamiliarity with the topic and cuisine was evident. But their self-satisfied myopia is of their own making.

Politics is what has brought Latinos to the attention of the New Yorker staff. However, three recent journalistic pieces make clear that the New Yorker is still unfamiliar with the Latino community, especially the Mexican-American and Mexican communities in the United States.

In an April 6, 2015 article with the off-putting title “How Hispanic is Jeb Bush,” Silvia Killingsworth explored the notion of Jeb Bush as the first Hispanic president. While Bush was not ethnic, he was the most culturally Hispanic of all the candidates in the race, she hinted. Killingsworth highlighted Bush’s bicultural family, his undergraduate interest in Latin American studies, and his Mexican-born wife, Columba. But most important, she pointed out that “Bush speaks fluent, near-effortless Spanish.” She equated the knowledge of Spanish with latinidad. The problem with Killingsworth’s assertion is that Latinos do not think Spanish is the central characteristic that defines latinidad. In fact, 87 percent of U.S.-born Latinos disagree with Killingsworth. Ultimately, she concluded that Bush is not Hispanic and that he should be wary of being perceived as an outsider defining the key characteristics of ethnic identity. Killingsworth would do well in following her own advice.

William Finnegan was the next to struggle with the Latino community. Finnegan is not ignorant of Latin American politics and history. He has profiled Jeb Bush and Jorge Ramos. He has also written on Central American politics. But his February 23, 2016 article “The Latino Vote in Nevada and Beyond” was troubling. Overall, Finnegan spoke about a “Latino vote,” but not Latino voters — one a prize to be won, the other people to be respected and valued. Sadly, the article was not about Latinos participating in democracy, understanding the complex issues facing them, considering the policies of Bernie Sanders and Hillary Clinton, and then voting. The article did not acknowledge the central roles that Latino staffers have played in crafting the messages and policies of Sanders and Clinton. The article did not even talk about the size of the Latino population, the potential impact their participation could have, or the issues important to them. Instead, the longest paragraph in the story was about Harry Reid’s behind-the-scenes machinations in Nevada, steering the state toward Clinton.

On February 17, 2016, León Krauze wrote a story with a code-switching headline “Governor Bush, Hable de su Historia Mexicana.” Krauze, again, tried to awkwardly shoe-horn Bush into the position of the truly “Hispanic” candidate. Bush “has an endearing story that links him to Mexico in ways that might prove to be more effective than anything Rubio could ever convey: Bush is married to a Mexican woman, has three bicultural and bilingual children, and speaks elegant, fluent Spanish,” wrote Krauze. The New Yorker yet again equated the Spanish language with latinidad. Krauze also highlighted the love story of Jeb and Columba. In Krauze’s retelling, their courtship is a strange colonial rom-com where privilege becomes aware of poverty. If Rudyard Kipling and Nora Ephron wrote a love story, they would produce Jeb and Columba’s love story — a young, affluent, white son of a powerful family traveled the world and met an exotic native, falling in love against the wishes of his parents and finally marrying. “It’s hard to imagine such a story not striking a chord among Hispanic voters, especially among those of Mexican or Central American origin,” he wrote.

Is it that hard that Latinos wouldn’t be moved by the Bush’s romance? This was the New Yorker’s equivalent of Hillary being tu abuela. Jeb’s marriage is tu matrimonio. Because, of course, poor Mexicans and Central Americans are all lucky enough to marry into an elite family that facilitates their entry into the U.S. that provides them economic security and assures their protection from the deportation state. Krauze lamented that Jeb’s “historia Mexicana” was “more a liability than an asset” in the Republican Party. It is only here that Jeb’s marriage and family are similar to Latinos: his family is not welcomed by the Republicans. And while Jeb may only suffer expulsion form the mainstream of the Republican Party, Latino families face deportation. Jeb’s sons and daughter will be safe, but others’ sons and daughters will not be so lucky. They will go years without seeing their fathers and mothers.

Finnegan’s story on the Latino vote ended on this note: “In an election season made rancid first by the demonization of Latino immigrants and then by a race to the bottom rungs of nativism among the leading Republican candidates, it felt past time to hear from Latino voters.” Yes, it feels past time to hear from Latinos across the nation. It feels past time to hear the voice of U.S. Latinos in the New Yorker. At a time when only 4.2 percent of reporters are minorities, diversity in the newsrooms matters now more than ever. Diversity shapes which stories get told and how stories are approached. Glaring errors and poor assumptions like those made in this series of stories could have been avoided. Of course, the problem is not that the New Yorker sent non-Latinos to write their few Latino stories, but that the New Yorker framed them so poorly. The writers failed to grasp the complexity of Latino identity, the importance of Latino political participation, and the significance of the Latino presence. In many of the stories there was an underlying presumption that these were the first articles to “break the story” in a serious manner. They were not. Their reporters were either ignorant of other important Latino media sources or chose to ignore them outright. Either reason is troubling.

2 responses to “The Talk of the Brown”