Of Trump, Chicago and What People Are Getting Wrong 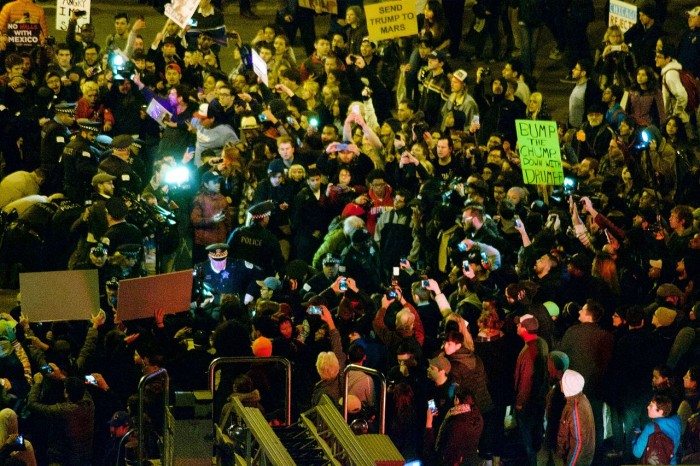 Protest at Donald Trump Rally in Chicago on March 11, 2016 (PHOTO by nathanmac87/Wikimedia Commons)

When the Trump rally exploded in Chicago on Friday, I had no idea about it until a few Chicago friends contacted me wanting to talk about it. I admit I was caught off guard by the news, far too concerned with personal matters to care much about politics. And as I talked with my friends, hearing them voice their sadness, fear and frustration over the whole event, something occurred to me that I have been chewing on ever since. Something that has compelled me to set aside all the other (admittedly more important) things in my life to sit down and write out my thoughts for the Latino Rebels audience, an audience I have largely separated from this year as I have been bogged down by real-life crises that make the outrage of the Internet seem especially petty.

I have always felt more compelled to express beliefs through fiction and comedy. Creating a distance from certain themes allows an objective and analytical eye that is often far more profound than an op-ed ever could be. I have especially turned toward comedy as an escape from a bleak reality. But the Trump phenomenon, and its increasingly unhinged chaos, merits a serious talk.

Part of that serious talk is addressing the gulf that exists between the Internet and the real world. Journalists, academics and activists like to believe that their words and ideas have a profound effect on large swaths of the population. The bubble in which conservative and liberal media operates does reach good chunks of people. Latino Rebels reaches hundreds of thousands of people, maybe even a few million for articles that go viral, and that is remarkable from a digital standpoint, but the numbers are an illusion. They exist in a vacuum that only values the people who tune in. Go into the low-income sections of any major city and talk to a poor person struggling to make ends meet, struggling to feed their kids while they work three jobs and can barely pay the rent, even moreso talk to a homeless person about “Latinx” or what a celebrity said that denotes privilege or subtle racism, and they probably won’t have a fucking clue what you are talking about.

Progressives especially write about the plight of the poor, and the politics of intersectionality (a term which clearly comes from a graduate thesis) is supposed to address the systemic injustices that cause racism and endless poverty, but the people who suffer most from those injustices don’t read Ta-Nehisi Coates or academic journals. I have a huge community of New York and East Coast friends whom I love dearly, but there are many times when they talk about the world like everyone lives on the Lower East Side or Brooklyn or Boston.

To put this in other terms, the United States has roughly 350 million people, probably more, and if your article reaches 200,000 people —while yes, that is the size of a small city— you are only reaching a fraction of the population of one country (to be precise, it is .057 percent). Think about that. Even when a book is a major bestseller and sells, say, 3.5 million copies, that only represents one percent of the population of the United States.

So let’s say you have this website that targets Latinos or Blacks or Asians, and those populations are several millions of people, yet you only reach a portion of that. You are affecting a tiny fraction of just that population. This is important to keep in mind when you consider trending topics on Twitter, and how if you are addicted to Twitter or any other social media site, you probably feel like the whole world is with you, but the reality is that of all the people in the world, the 7 billion of them, the people who use Twitter is ridiculously small.

So these subjects that mean so much to online communities is not reflective of the world they are commenting on. In fact, for all the talk of privilege that you hear in progressive and online civil rights circles is something that is generally pointed out by people who have the privilege of not worrying about where their next meal comes from, or if their health will completely fail at any moment (as is true of my wife and her fellow multiple sclerosis afflicted friends), or if they don’t find a better paying job, they might have to watch their child die of starvation, because when that is your reality, whether you put an ‘x’ at the end of a word or create “safe zones” in universities or whatever stupid thing a rich celebrity said offending people, just don’t goddamn make a difference.

To write on these topics means you have privilege. The privilege of an education. The privilege of having the peace of mind to care about things that in the greater scheme of life really don’t matter. These topics that don’t put food on people’s tables, or pay the rent, or ensure that their children aren’t malnourished or obese, or prevent the poisoning of citizens in their water supply, or stop corporations from destroying the land, or end the molestation of young people, or shield refugees fleeing war zones, or bring down the use of child soldiers in armed conflicts. Nothing that is so important on these websites helps those people and the billions of others threatened by homelessness, disease, violence and the indignity of poverty.

But what such articles do is create a culture, an attitude, and that attitude is an abrasive one that is as much about correcting injustice as it is about gaining attention, and what that culture does most of all is foster a sense of “us-versus-them,” even on the progressive side, perhaps especially on the progressive side, and that completely destroys communication.

What happened in Chicago last Friday night was a communication breakdown. The truth is that the majority of Trump supporters are not mindless racists—they are human beings with legitimate gripes about how the 1% has fucked over every other segment of society. The grievances of many white working-class people are real, valid grievances, which in truth are not that far from the ones communities of color have. The rich have taken our land, contaminated our food and water, been given impunity from fraud and abuse, and the difference between us and them is that we blame the white man for doing this and they blame whatever minority is most convenient so they don’t have to blame the rich and give up on their hero worship of wealth. But that worship of wealth exists amongst minorities too, especially immigrants. The idea of immigration, after all, is that you are going somewhere else to make a better life for you and your family. When that somewhere else is the United States, that means an aspiration to the American Dream, which is entirely based on wealth gospels (the belief that God rewards people for their financial success and the richer you are, the more blessed you are by God) that have been popular with evangelicals for centuries.

"You can't have this many come to your city and let his hate go unanswered." —@myblackmind's dad, from Chicago https://t.co/CUQGaybqrE

Martin Luther King Jr., in his great wisdom, spoke on the very contradiction within the white community that has led to the rise of Trump. He spoke about how Jim Crow was as much about keeping Black people down as it was about suppressing an uprising from poor whites. I would argue the fear of poor whites was actually greater than the threat of Blacks becoming enfranchised. If you can keep poor white people blaming Blacks, they will keep the system in place so rich people can continue to accrue wealth. The minute rich people lose poor whites is the minute their utopia of profit falls apart. Given how enormously screwed up the economic meltdown of 2008 was, these poor whites have come to realize that the system is also out to get them.

And if minority activists pause for a minute, they could see this connection. In the real world, not much separates the struggles of poor whites from those of minorities. In the real world, poor whites really are not that privileged. Their inheritance has been wiped out by free trade and globalization. Their industries are becoming obsolete due to new technologies. Their aspiration to the American Dream has been shattered.

Poor whites are dying at record rates due to heart disease, drug addiction and suicide. And as long as minority activists insist that they are, above all others, the most oppressed people in the history of the world, then they miss the opportunity to bring poor whites into their fold. In the real world, we are fighting the same fight, and we have been equally brainwashed. On the minority side, we see ourselves as eternal victims, and we blame an unfair system that has been in place for centuries that keeps us down. On the poor white side, they see the exact same thing, but believe that the cause is the presence of the “other”, whether they be immigrant or Mexican or Black or female. If you just get rid of the “other,” then all will be well. On our side, if you just get rid of “white patriarchy”, then all will be well.

Both are illusions strengthened by the bubbles of the Internet. Both are lies that keep us from joining forces against the oligarchy that oppresses us. In the real world, the struggles of life in America transcends color lines. We are fighting the same fight. People like Trump exacerbate that lie, but if activists engaged with his voters instead of tossing loaded phrases like “racist” at them, they might just be willing to listen. It is up to minorities to be the adults in this situation, and persuade instead of provoke. Poor whites see liberal activists as entitled elitists who think they are better than them. Activists have done very little to create dialogue with a segment of society that is fed up, that is suffering, that is easily led to embrace the worst qualities of our species by irresponsible leaders, and as long as we continue to demean them, then people like Trump are all they got.

If you want to take Trump’s power away, you need to engage and educate his supporters, in the real world and not just the Internet—in daily life, at his rallies, and show them that we are in this screwed-up situation together. They have other options than supporting Trump. They just don’t know it yet.

One response to “Of Trump, Chicago and What People Are Getting Wrong”