We’ve all daydreamed about the most orgasmic romantic tale: dressing up and going out to enjoy a diminutive, yet expensive meal at some five-star over-the-top restaurant, pretending we have no clue why we’re getting drunk on expensive champagne. Suddenly a declaration of eternal love sparkles by the sight of a big, fat diamond ring. Pretty much standard, give or take a couple of carats and the medium-rare unseasoned steak. It has been implanted, burned, and tattooed in all of us that a diamond ring equals love, right? Well, believe it or not, diamonds really aren’t all that rare, nor expensive. In fact, the reason diamonds cost so much is more due to unethical — evil — business practices and incredibly successful advertising campaigns. 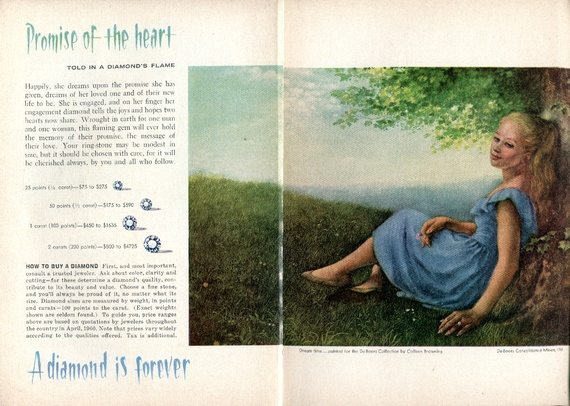 Prior to 1869, South Africa’s main exports were wool and sugar. There was really nothing interesting for Europe to exploit. So what changed? In 1883 a shepherd boy near the Orange River in South Africa found a carat diamond. Nicknamed the “Star of South Africa,” the diamond sparkled and a light bulb went on in the heads of some British conquistadores. Soon after, four mines were ransacked followed by the discovery of the largest diamond deposit ever. By now you may have guessed the diamond business is being built and developed by the exploitation and slavery of our African siblings, from a few “business dudes” in power, ever since. These people in power valued the land of the region, by astronomical amounts. And, yes, two Anglo-Boer wars ensued with many casualties and devastation. 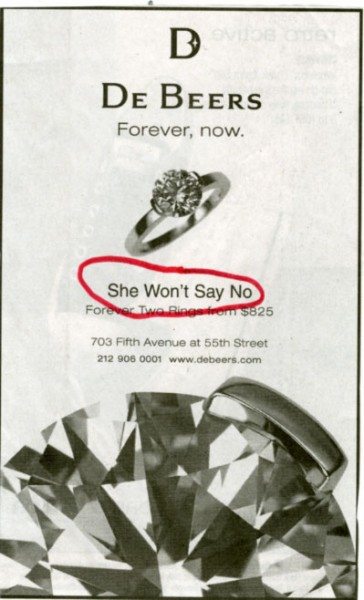 The fighting and overwhelming loss of life didn’t justify the amount of diamonds coming out of the South African mines. In 1888, as diamond prices fell, the remaining mine owners decided that the only way their industry would survive was, instead of competing with one another, to consolidate and create a monopoly in the industry. That corporation was De Beers Consolidated Mines, Ltd., headed up by Cecil Rhodes. From that point forward, the De Beers Company was nearly the sole owner of every single South African mine. As a 1982 Atlantic article by Edward Jay Epstein article put it, “De Beers proved to be the most successful cartel arrangement in the annals of modern commerce.”

Up until now, you may all see how diamonds stand for love, right?

Let’s bring this up a nudge. The study The Truth About The Diamond Trade states:

When Rhodes was alive the diamonds at Kimberley were still alluvial, easily picked up from the ground. Africans, enslaved on their own land, had tin cans tied around their necks. They were lined up and forced at gunpoint to get down on their hands and knees to pick up the diamonds and put them into the cans.

Mines were discovered in Australia, Siberia, and Western Africa, which again saturated the market. So financial backers and an advertising agency realized that the United States was a significantly under-tapped market for diamonds. They just needed to figure out a way to convince Americans to buy their product. They did that by using the happiest, and occasionally, somewhat irrational human emotion: love.

We think we need diamonds, simply because N. W. Ayer & Son told us to believe such rubbish. What’s worse, they did so without being transparent about the diamond business’s evil practices. Using newspapers, magazines, movies, and even a series of lectures at high schools across the nation, they brainwashed us with the illusion that diamonds equaled love. The bigger and more expensive the diamond, the more love. And it worked. 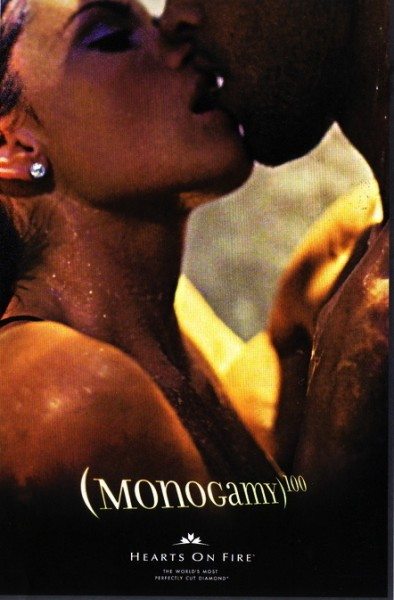 The Hearts On Fire® “brand” diamond sells for 15-20% more than other designer diamonds.

Ironically, in 1951, N. W. Ayer found some resistance to its million-dollar publicity blitz. It noted in its annual strategy review:

The millions of brides and brides-to-be are subjected to at least two important pressures that work against the diamond engagement ring. Among the more prosperous, there is the sophisticated urge to be different as a means of being smart. … The lower-income groups would like to show more for the money than they can find in the diamond they can afford … The substantial diamond gift can be made a more widely sought symbol of personal and family success — an expression of socio-economic achievement.

Now, hermanas, let it be noted that, during the 1930s, diamonds were virginity insurance. A now-obsolete law called the “Breach of Promise to Marry” once allowed women to proceed with legal action against men for breaking off an engagement. Back then, we were valued more by being virgins before we married. If the groom broke the engagement after they had sex, she was considered permanently “damaged.” No need to value our brains, skills and genuine, giving heart.

This is not just a sexist issue. While it’s true women have been hypnotized and indoctrinated to believe there’s an innate need to wear a unique, expensive engagement (and subsequently wedding) ring, in fact, this predatory selling tactic targets men. For them, it’s indeed a rite of passage. For instance, men could invest their money in assets that will raise value over time and someday provide a financially stable foundation for a family. Instead, they trade that money for a diamond ring, which isn’t much of an asset at all. As soon as you leave the jeweler with a diamond, it loses over 50 percent of its value. Countless brothers will attest that the obligation to furnish a diamond engagement ring as a prerequisite for marriage is both stressful and expensive. But how could they resist, if there’s a great pressure to show how much they love us? The answer is simple, dear single men. What the diamond industry is basically telling you is that a diamond isn’t forever; the measure of your manhood is. And I unapologetically declare that to be oppressive and downright untrue.

But it does take two. With these ads, young women had to be encouraged to view diamonds as an integral part of any romantic courtship. Tracy Clark-Flory at Salon argues that the male proposal is “a culturally sanctioned time for a man to show his tenderness.” Doesn’t this permeate stereotypes? So the heterosexual man assumes total control, while we remain somewhat submissive. There again, if a woman proposes to a man, it’s the 21st century, but I’ve yet to see a lady friend give a diamond ring to a brother-in-spirit. And while I’m in the 21st century, let it be known this is not exclusive to heterosexual couples. In recent times, advertising has targeted our brothers and sisters from the LGBTTQ community.

Bottom line: Do you really know what the diamonds business does? Conflict diamonds fund wars, support apartheid for decades with our money, and simply leave a trail of carnage and terrorism. Some counterparts have called the diamonds advertising scam the worst in history. Personally, I find cigarettes the most evil of all, but yes, diamonds are up there.

Here’s my invitation: Let’s change this. Sisters, if you find the diamond brainwashing tactic abhorrent, let’s unite and stop it! I’m sure I’m not the only woman who’d much rather build a stable nest, fostering responsible consumerism, than “enjoying” instant gratification by indulging in a lavish, luxurious lifestyle. I’m sure I’m not the only person researching companies before spending a penny on them, knowing that, if I don’t, I’m unwillingly contributing to the suffering of our people, our environment and animals. Brothers, know you’re under no obligation to fund evil colonialism and human devastation by presenting a diamond as a sign of love. It’s nothing but an oxymoron; hypocritical, even.

So, amigxs, are you hopelessly in love and want to spend the rest of your life with your partner? With those diamond funds, invite your partner to take a trip around the world, together; learn from as many different cultures as possible. Sit on the beach, have piña coladas in Guánica, Puerto Rico and margaritas in Veracruz, México. Then, go home, take the most valuable lessons from that trip, and help each other make your dreams come true. Just an idea.

If you have creative, lifelong ideas to show love that don’t involve conflict, post them using the hashtag #NoDiamonds.

One response to “The Diamond Ring: Sexist Advertising Scam #WomensHistoryMonth”