Puerto Rico has become an unfortunate contradiction. One one end, House Republicans circulated a questionable draft, awarding a federal control board the legal authority to oversee a reduction of the island’s debts, instead of entrusting that power to local officials. Puerto Rico’s debt was sold by different issuers and backed by separate revenue streams or legal safeguards, none of whom are elected local officials, although some would say some of those elected officials are part of the problem.

Meanwhile, the call for a federal board even made the White House yesterday, when White House Press Secretary Josh Earnest called for “independent fiscal oversight:”

Congress must act now on the crisis in Puerto Rico. Here’s a rundown on what they need to do. https://t.co/FLdhXbWLNn

“[…] it doesn’t give me any pleasure, under these circumstances, to block any revenue stream that may contribute directly to Puerto Rico’s general budget.” One of the ‘expert witnesses’ stated: “At the end of the day, the government shouldn’t depend on invalid taxes to try to pay for essentials.”

This argument triggered the aforementioned judge to rule in favor of the non-union megastore, who claimed their business “suffered discrimination,” due to the imposed law. The ruling comes as Walmart prepares to close seven stores in Puerto Rico as part of a plan to shutter 269 stores worldwide.

In the midst of this contradiction, one son of Puerto Rico’s speaks out. Broadway’s “Hamilton” writer and lead actor, Lin-Manuel Miranda, penned a plea for relief for Puerto Rico:

“According to the census, Puerto Rico has lost 9 percent of its population in the last decade, with 84,000 leaving last year alone. […]If Puerto Rico were an American city, it could declare bankruptcy, as Detroit did in 2013. If it were a state, the federal government would surely have already declared emergency measures to help the most vulnerable. But since it is a territory of the United States, there is no system in place to handle the financial and humanitarian crisis that is happening right now.” 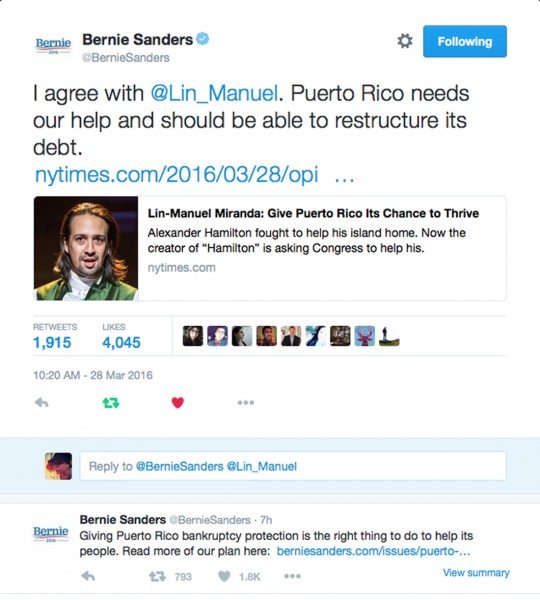 Mind you, all of these latest headlines happened in one day, pretty much simultaneously. Federal control board ideas from Republicans, talk of “independent fiscal oversight” from The White House, while Walmart gets off the hook.

All this happens, and Puerto Rico continues to experience a massive exodus reminiscent of the 1950s.

What is happening to us, Puerto Rico? Will we ever wake up?

2 responses to “Economic Colonialism of Puerto Rico: A Predatory Contradiction”