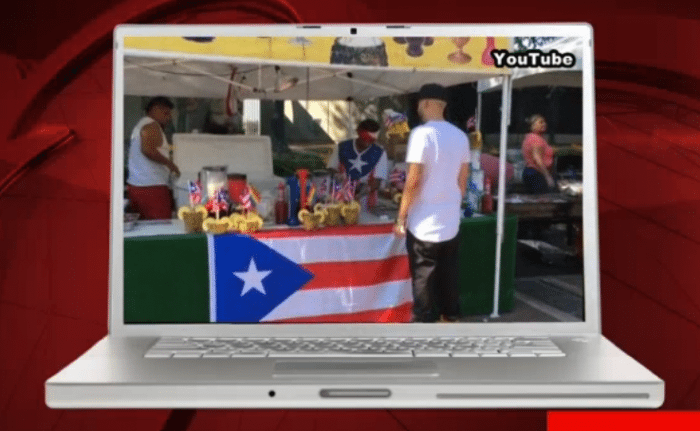 Here’s one story from Hartford, Connecticut, that you might have missed this week. On Tuesday, local station 96.5 TIC FM deleted a video from its site which showed DJ Gary Craig openly crapping on the city’s Latino Festival. Even though the station got rid of the video, NBC Connecticut was able to capture it before it vanished from the internet (FYI, nothing really vanishes from the internet). Here is what Craig did and said in the video (stay until the end, when he thinks the Puerto Rican flag is actually the Cuban flag):

That video, posted over the weekend, led to city officials denouncing Craig.

“Gary Craig’s video is repulsive and bizarre,” said Mayor Luke Bronin. “I was at the riverfront Saturday afternoon, and the festival was everything I love about our city: people of all different backgrounds coming together at our beautiful riverfront to celebrate the dance, music and food of one of our largest and most vibrant cultural communities here in Hartford. CBS Local Media, the owner of 96.5 TIC FM, should get this trash off of their website.”

By Tuesday, the video was deleted by the station and by Craig.

According to reports, Craig issued the following statement: “I would like to take the time to address the video I made at last weekend’s Latino Festival. I recognize that it was a poor attempt at being humorous. It was insensitive and stupid, and I sincerely apologize.”

The station, owned by CBS Local,called the video “inappropriate” in a separate statement.

“We are taking this matter seriously and have communicated to Gary that there is no place for this type of content on our station,” the station said.

I sincerely hope that you all see this and remember what an amazing man my husband is. He has devoted over 30 years to the people of Hartford of all races, creeds and color, his humor. He has made you all laugh a lot, cry a little and love unconditionally. We Are The Children has helped many,many families when no one else would, including those children in the Latino community. This is a man who would give up anything to provide for the children of Hartford. We are all so quick to judge when a misstep happens, but remember all that this man has done and will continue to do for the children of Hartford.

Others on Craig’s Facebook didn’t have kind words for the DJ:

I thought your reporting on the Latino Fest was obnoxious and lacked knowledge or respect for the difference between Cubans and Puerto Ricans. A little bit more cultural sensitivity might be in order. Parallel universe? Really?

For your information is Puerto Rico not Cuba. You sound very racist and not to happy with how you came about my Latino festival.

UPDATE: Another video of Craig that was deleted previously has resurfaced. (H/T CTLatinoNews)