An Interactive Map of Latino Urban Riots and Social Unrest

To provide a more interactive and visual understanding of U.S. Latino urban riots, I created a map to pinpoint where riots and incidents of social unrest occurred, excluding sporting events, prison and school settings unless they occurred off school grounds. Most of the map’s pinpoints indicate the location within the city where the riots began. I have also included links to newspaper clippings and sites with additional information about the incidents and, when possible, photos and videos.

The list is longer than when I wrote my original piece on Latino urban riots. Since then, I came across other riots and incidents of social unrest in places such as Philadelphia in 1974, Holyoke, Massachusetts, in 1980, and Lancaster, Pennsylvania, in 2000. The two groups that rioted together the most were Puerto Ricans and African Americans, since they lived in the same communities and shared the same grievances. However, there were several incidents, particularly in the early and mid-1960s, of Puerto Rican versus Black riots as well as Puerto Rican versus Black and white riots.

Since its publication, the article “Forgotten Latino Urban Riots” has been well received. NPR’s Latino USA did a cross-post on it, Rosario Dawson retweeted it, the New England Historical Society used the information to write an article about New England’s forgotten Puerto Rican riots, and a writer from Vox asked whether she could write a piece about the topic. The idea for the visual map came from the Vox writer.

However, I did receive some negative reactions. Some commenters called me a race baiter and a lair. One person said I was biased and had a hidden motive. Another accused me of talking about Puerto Rican riots “that happened in Puerto Rico.”

These comments aren’t surprising. Even archivists in New Jersey attempting to uncover the history of the 1974 Newark Puerto Rican riots received some vitriol. Not only do some residents deny that the riots happened, one comment in a news story about a panel discussion read, “Riot? Really? Stop trying to balance out what the blacks did to Newark!” The comment continued, “It was nothing more than a park brawl over cops breaking up an illegal dice game for $ [money].” This is selective memory. The September 1 park brawl led to a protest gathering at City Hall the next day, where rioting ensued for three days and sporadic violence continued until September 14.

Video footage of the 1974 Newark Puerto Rican Riots. This report is on the third day of rioting, which was less violent than the previous two days where several people were shot and numerous other injured.

Urban rebellions in the United States are largely seen as the byproduct of African American rage. Thus, some Latinos might feel embarrassed that identical outbreaks of violence have occurred in the community, especially considering the fact that numerous sociological studies have noted that Latino immigrants try to distance themselves from African Americans. This might lead some Latinos to view themselves as different from Latinos who immigrated and migrated to the United States prior to their family. As a fellow peer from Puerto Rico told me, “many on the island don’t consider their state-side brethren, especially second or third generation to be ‘Boricua enough.’” But ignoring this history belittles the diverse experiences Latinos have in the United States.

It also ignores the fact that the pre-riot conditions that sparked these events such as absentee landlords overcharging rent for dilapidated homes, poor schools, police harassment, high unemployment, lack of political representation, municipal neglect and poverty still exist in many communities around the country. Even worse, gentrification in major cities has displaced poor people and migrated many of these issues to small cities and towns. As many cities, particularly in the Rust Belt, try to revitalize themselves by making their downtown areas attractive to suburbanites and yuppies, low-income African Americans and Latinos find themselves in low-wage employment with little to no job security. Despite the existence of shopping districts, art, cultural and entertainment centers, highly concentrated racialized poverty persists, which reinforces social inequality and racial boundaries. 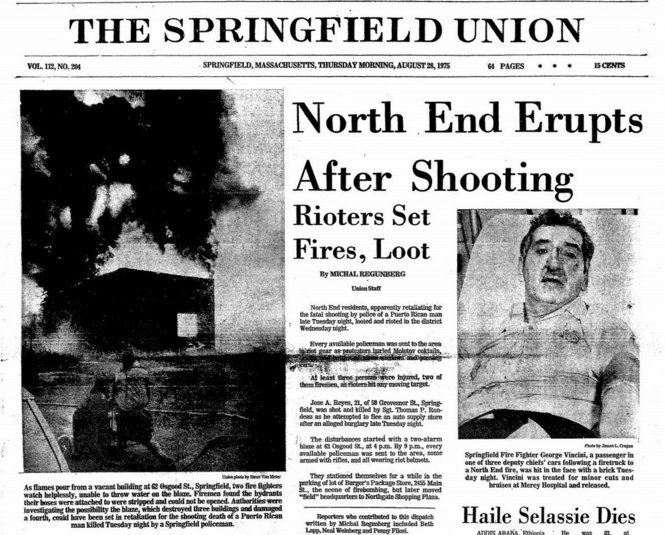 The August 28, 1975 front page of The Springfield Union from Massachusetts reports on riots that erupted in the North End following the fatal shooting by Springfield police of Jose Reyes.(The Republican archives)

In the article, I discussed riot shaming, a tactic where people demonizing rioters, mostly African Americans, while ignoring the fact that identical outbreaks of violence have occurred among other racial and ethnic groups. The practice didn’t start after the riots in Ferguson and Baltimore. As African Americans communities erupted in violence in the 1960s, some academics and community leaders held onto the belief that Latinos were naturally “submissive” in contrast to their “aggressive” African American counterparts.

When violence erupted in Puerto Rican communities, residents expressed bafflement. After three nights of rioting in East Harlem and the South Bronx in July 1967, an article in the New York Times reported that “the shock of the city’s first Puerto Rican mass disorders… came against a background in which Puerto Ricans have historically been considered passive.” A local pastor said, “We never expected this to happen in this part of Harlem. It’s not that Puerto Ricans aren’t as bad off as the Negroes, but the Puerto Ricans don’t have the Negroes’ sense of ‘revolution of expectations.’ The Puerto Ricans sort of celebrate their own poverty.” Although there were Puerto Rican riots in Chicago and Perth Amboy, New Jersey in 1966, residents in New York appeared unaware of these two incidents.

Latino rioting exposed the stereotype of “Black militancy” and “Latino docility,” but the juxtaposition persisted. In Bridgeport, Connecticut, during February 1968, police officers studying urban minority problems rated police relations with the Puerto Rican community as excellent. “The relationship between the policeman and the Puerto-Rican [sic] people couldn’t be better,” said one officer at a meeting.  Another followed the comment with “Negroes tend to be more defiant.” The officers concluded that Puerto Ricans suppose respect for law enforcement came from a strong, strict family structure and positive attitudes towards law enforcement on the island. Even if these officers knew about prior incidents of Puerto Rican riots and believed that Bridgeport was different, the two-day riots in the city’s Puerto Rican community in May 1971 revealed the flaws in their study.

This was one out of the many riots to rock East Los Angeles during the 1970s. This incident occurred on January 31, 1971

Riot shaming, then and now, requires selective memory and voluntary ignorance. At its core, it’s anti-Black. It undermines similar concerns many Latino communities have shared and continue to share with African Americans—as was demonstrated when Latinos participated in the riots in downtown Oakland over the shooting of Oscar Grant in 2009 and in 2010. Additionally, it doesn’t change the fact that issues in communities like Sandtown-Winchester, the impoverished, deeply-blighted, crime-ridden, predominately African American community in West Baltimore where police arrested Freddie Gray, is almost identical with Fairhill, the impoverished, deeply-blighted, crime-ridden, predominately Puerto Rican community in North Philadelphia.

Latinos don't #riot. If a #Latino gets shot by the cops, we all know the pendejo probably deserved it! #BaltimoreRiots #Baltimore

It’s not preposterous to argue that a riot over various grievances in a predominately Latino community could happen again because several cities and towns had experienced near riots in the not-too-distant past. There were near riots in places such as Reading, Pennsylvania, in 2008; New Bedford, Massachusetts, in 2009; and in Salem, Massachusetts, in 2011. Since near riots don’t make national news, these events remained local news stories.  These incidents, and many others, are examples that a small-scale disturbance could one day escalate into a full-scale riot.

Some communities are a spark away from experiencing urban unrest. After a large-scale fight involving 350 to 400 students that occurred in a park adjacent to a high school in Reading, Pennsylvania in September 2015, one police captain noted that the brawl could have erupted into a much larger event since “emotions run high when you see a family, relative get arrested, or a dear friend get arrested.” Recently in Reading on June 29, 2016, criminal charges were dismissed against an officer who was caught on a surveillance camera punching a woman and smashing her cell phone during a traffic stop. This creates further tensions between a deeply impoverished community and its police force, which has a history of conflict.

While the topic can be unsettling in the midst of anti-immigration sentiment, acknowledging and studying this history reveals how Latinos have shaped the country’s understanding of racial justice. It also shows the distinct histories of various Latino groups and, furthermore, demonstrates the parallels and overlaps Latino history has with African American history. And overall, it makes American history more accurate and exciting.

Originally from Allentown, Pennsylvania, Aaron G. Fountain, Jr. is a Ph.D. student in the Department of History at Indiana University-Bloomington. He tweets from @aaronfountainjr.