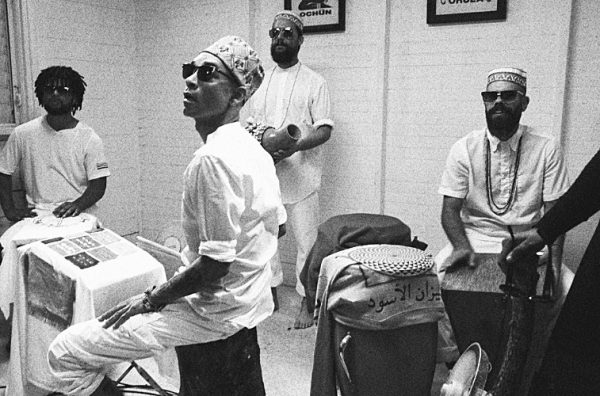 Puerto Rico’s ÌFÉ launches its first-ever tour tonight at the Harbourfront Centre in Toronto. The group recently released the official music video for their second single “House of Love (Ogbe Yekun).” The clip, directed by Otura Mun and photographer Luis R. Vidal, is set at Otura Mun’s home and studio, a late 19th century wooden house that once served as Puerto Rico’s first Temple of the Yoruba. It is a dream-like vision of transcendence as ILE ÌFÉ, the literal House of Love, seems to come alive, dissolving the boundaries between our visible and invisible worlds.

“House of Love (Ogbe Yekun),” ÌFÉ’s second single is a ghostly, beckoning musical offering. Recorded live using improvised electronic instruments, ÌFÉ mixes Cuban Rumba with the digital sounds of Jamaican Dancehall, creating a musical space and expression altogether its own. At times tender, at other moments seductive and flirtatious, the song is an invitation and offering to those forces that walk among us and a reminder that life is nothing if not a constant act of giving to receive.

ÌFÉ is a bold new musical project from Puerto Rico based African American drummer/producer/singer Otura Mun. Mun, an Ifá priest or Babalawo in the Yoruba religion, has been a vanguard artist in the Puerto Rican music scene since arriving in the the late 1990’s, producing critically acclaimed albums and songs for many of the islands most important musical voices, including Mima, Cultura Profética and Calma Carmona. ÌFÉ is Otura Mun’s first solo project.

“House of Love” follows the group’s debut single released this past fall, “3 Mujeres (Iború Iboya Ibosheshé).” ÌFÉ is the Yoruban word for “Love” as well as “Expansion.” Both are pivotal themes in the group’s music. “I wanted to make something that made me feel like when I’m playing, my soul is flying,” Mun says.