The Larger Political Fight Begins After the Dust Settles

This past week has been terrible news for Donald Trump and good news for those Trump is “taking our country back” from—Latinos, African Americans, Asians, Native Americans, Jews, Muslims, Gold Star families, immigrants in general, babies, women, reporters, etc. Trump has plummeted in the polls in key swing states. Georgia and Arizona are now up for grabs. I would describe the mood of Clinton supporters around me as cautiously jubilant.

Don’t get too comfortable yet.

While Trump’s defeat certainly will be important and a crucial victory for humanity, nobody should feel it is time to relax. This story will not end with Trump’s defeat. Trump losing the election will certainly feel satisfying, but for those who have been targeted by his movement, the nightmare will remain.

Trump is not the head of the serpent. He may have helped unite and coordinate this white nationalist movement by mainstreaming and bringing it to the fore, but Trump did not manufacture this movement on his own. This plague has infected America since before the republic was even founded.

Neither Trump’s ardent fans nor the hate that brought Trump to power will not evaporate on November 9, but we are in danger of many Americans believing it will.

The truth is Trump is unimportant. Commentators like to think of Trump’s movement as a personality cult around the man. It isn’t. While the media focuses on Trump’s bigoted and buffoonish antics, the real story is slipping through ignored. For every outrageous remark Trump makes there are the thousands of white nationalists who helped create his candidacy. For every bigoted statement that comes out of Donald Trump’s mouth, thousands more white supremacist domestic terrorists are “energized” by him.

Donald Trump may be the figurehead, but these are the people we need to be afraid of.

While Trump certainly believes this movement is about him, the core of his support does not stem from his personal charm or eloquence. Trump supporters don’t really speak highly of him in terms of personality. Trump isn’t a particularly magnetic person. His attraction is his message. His “willingness to tell how it is.”

His support is not about who Trump is but about what Trump says, and that is far more alarming.

You don’t hear people at Trump rallies talking about his experience, his intelligence, or his capacity to do the job. Even Trump’s business “success” is offered more as an excuse for his non-existent government experience rather than something that attracts his voters. What you hear about is immigration, “taking our country back,” “keeping us safe,” immigration, ending the political correctness that is “killing us,” standing up to Black Lives Matter. Did I mention immigration?

Let’s not kid ourselves. For these people, “Making America Great Again” is about making America white (whiter) again. This movement is about wresting away all gains made by people of color over the past few decades. This is about the rest of us getting into line. That is to say, the back of the line.

After November 9, regardless of how the election goes, the violence against people of color will be worse. A Trump win will see celebratory white domestic terrorists feel legitimized. A Trump defeat will see the same white nationalists enraged.

There will be violence following this election. White nationalists haven’t been this united, organized and mainstream for a very long time. On this front, the only variation between a Hillary Clinton election and a Trump election is how much of the violence will be government sanctioned.

The election has not even happened yet and we have already seen Trump supporters threaten Black Lives Matter protestors with a gun, hit a Somali immigrant in the face with a mug, scream “Kill the Muslims! Kill them all” before pumping a fist chanting “Trump! Trump! Trump,” proudly blog about assaulting a black woman at a Trump rally in the name of white supremacy, beat a Black Lives Matter protestor as Trump repeatedly called out “Get him outta here,”chant “USA” as they kicked and dragged a Latino protestor out of a Trump rally, threaten to kill a black man already punched in the face at a Trump rally, and chanting “you killed Jesus” at Jews. 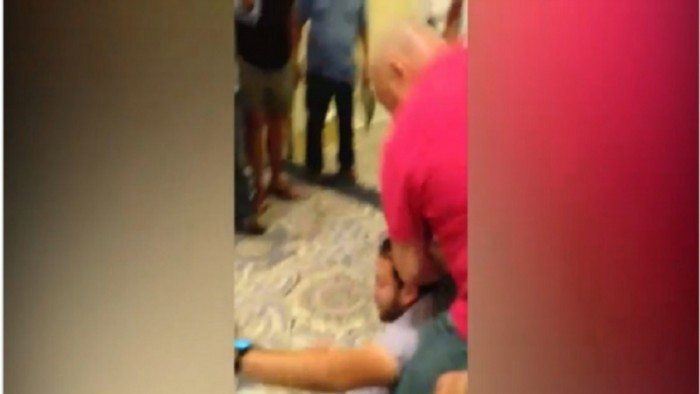 This is just a fraction of what Trump’s candidacy has engendered, and it would be foolish to assume things will not escalate from here. This is a grotesque side of American society has grown bolder and will only continue to grow bolder if they are brushed off or ignored. Whenever liberals shake the dust from their hands and declare a single victory a job well done, we abandon progress. Every time we give up on change, we cede yet more ground to those seeking to return us to a time when people “knew their place” and society was free of “troublemakers.”

The bulwarks against oppression are not eternal. Every victory must be maintained or fade away. We have already seen voting rights eroded. People of color are imprisoned at an alarming rate. People only need to claim that they felt threatened in order to perform a firearm lynching.

Liberty will always decay with apathy.

What can we do to protect ourselves? The state we find ourselves in is daunting. Law enforcement – the people charged to protect us—has been infiltrated by the very people who seek to do us harm. Some sections of law enforcement are clearly in league with Trump’s movement. The police response to a 15-year-old protestor being pepper sprayed and groped at a Trump rally was to charge the 15-year-old with disorderly conduct. Meanwhile, a police lieutenant involved with the case claimed the man who sprayed the young woman with pepper spray couldn’t be found despite police stating the suspect had been located earlier that same day.

Despite being an upstream battle, all change has to begin somewhere. What will keep us, our friends, and our neighbors safe? I do not know exactly, but I believe it starts with all of us looking out for each other. The people looking to purge us from view are organizing and preparing. That means we must get organized and prepare too. We cannot be intimidated into silence. Invisibility only makes us more vulnerable. After the likely Democratic win in November, nobody is allowed to fade into the background. We can’t allow the celebrations and victory parades obscure the very real danger. More than ever, we must continue demanding our own safety through protest and political action.

We can act, or we can surrender to oppression.

The choice is visibility or victimhood.

What we face will not offer a third option.

Jason de Kanter Gualberto grew up in Texas. His birth certificate lists his races as “Caucasian” and “Spainard” (not a typo). Jason’s work has appeared in the Tacoma News Tribune and on Pixelkin.org. He is proud of his Spainardian heritage, but is mindful that whiteness grants him a great deal of privilege. Jason from @jdekz.