An Open Letter to White America 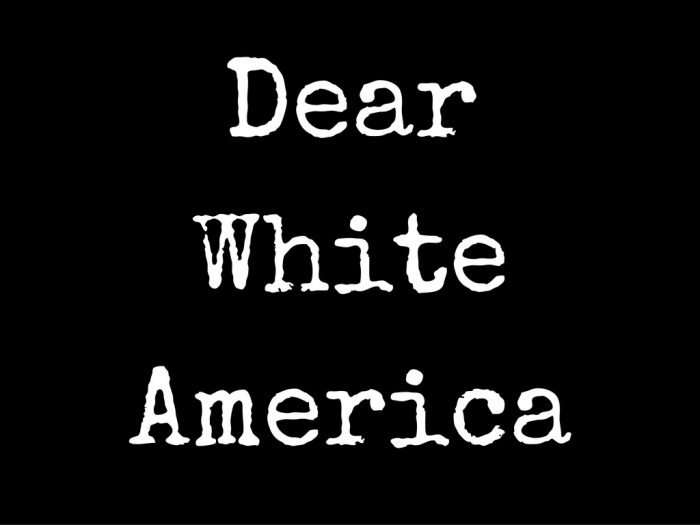 Let me vote for who I want to vote for.

If I choose not to vote for Hillary Clinton, do not threaten me with what the future might hold. Do not blame me for a situation created because of YOUR lack of a vote. Do not say “if you’re Latino, you must want Hillary Clinton to be president,” assuming that the blatant disregard her opponent holds for my culture and people has guaranteed her our vote. Do not forget her record in Latin America. Do not forget how she pandered to us: ella no es mi abuela. This does not excuse Donald Trump and his xenophobic language, it is just a reiteration of facts. Who we vote for is OUR choice. We are not to be manipulated.

Do not threaten the continuation of circumstances created under previous administrations, Republican and Democrat, as a reason you deserve my vote. You alone cannot fix these problems. Do not make promises you cannot keep. Do not throw in our faces our dire economic straits, our inferior place in the fabric of American society, as a reason to vote for you. WE fight, WE struggle, WE survive. Candidate after candidate has promised change, but, still, here we are, the victims of broken promises and shattered dreams. Yet you promise change, and this should endear you to us?

Nothing is guaranteed. If I choose to vote for Donald Trump, it is because I have the right to do so I do not judge my Latinx brothers and sisters who support Trump. I may question them and their decision, but I don’t judge them. Their choice is their choice. If I were a Trump supporter, I do not need the constant reminder of what he has said of my people. I am quite aware. I do not need his missteps broadcast to heighten the “appeal” of his opponent. Attack his policies, attack his vague understanding of foreign affairs, but do not bombard us with the same story over and over.

A Latino vote for Donald Trump does not make one less Latino, any more so than a white vote for Trump does not make one an inherent racist. We vote for who we want to vote for. The response? He called us criminals, drug smugglers and rapists. I can’t argue this point, he did say this. But, why are YOU so offended by his words? Did he, by uttering such a statement, place a collective identity on YOU and YOUR culture and people? Oh, but that shouldn’t matter, because YOU are by our side, YOU are here to help us. Thank you, oh great white savior, for without you, we could do and achieve nothing! For your help is the answer to our prayers!

Sarcasm aside, your offense, if it is authentic, is appreciated. But, it must go beyond offense to xenophobic statements. It is one thing to be offended by his words, and stand beside us as we battle the hatred hurled our way, but does your offense go beyond the borders of stated rhetoric?

Do you hold offense to the mass deportation of women and children seeking refuge from an oppressive government? Does violence committed as a consequence of the Drug War offend you? Does the disappearance of Latinx youth offend you? Does the shooting of unarmed brown lives offend you? The problems in our community go beyond comments made about immigrants. We are more than just immigrants.

We are also citizens. Your offense to statements that label us as criminals, drug smugglers and rapists only further perpetuates the narrative that we cannot be citizens. It insinuates that we can only be naturalized. Do not help perpetuate this stereotype. If help should be offered to combat the stigma related to hateful rhetoric, do not just call those labels offensive. Do the same when others refuse to acknowledge our citizenship and our humanity.

If I choose to vote for the third party, do not blame me for the loss of your candidate. Do not threaten me with the idea that my vote for a third party cheapens the election.

“The third party does not have a chance,” they say.

“Now is not the time to take a stand for what you believe in,” they say.

I’m sorry, but why must I conform and vote for what YOU believe in, for my vote to count? Am I not allowed to vote for who I deem as the most responsible candidate? Does my vote only matter if it conforms to the standards that you hold so near and dear to your heart?

I should not have to defend my vote to you. Who I vote for is my decision. I do not aim to please you, or the system that has been complicit in the oppression of my people for so long. I do not apologize for not conforming to the narrative that you have assigned to me. Because of this, you have labeled me a threat.

I am a threat because I voice my opinion.

I am a threat because you can’t control me.

I have news for you: I am not yours to control.

Nathaniel Santos Hernández is a recent graduate of the University of Maine-Orono with a B.A. in Anthropology. He is a new contributor to Latino Rebels. You can can follow him on Twitter @saint_nate12, on Medium and on BeVisible.

3 responses to “An Open Letter to White America”