How #LatinosForTrump Are Spinning ‘Taco Trucks on Every Corner’

As one of the first outlets to warn people of the amateur hour team that is the Latinos for Trump “movement,” it comes as no surprise to us (at all) that Marco Gutierrez, one of the group’s leading voices, choked big time on national television Thursday night when he tried to explain that Latin American immigrants are making the United States less American and it must be stopped because if it is not, we will have “taco trucks on every corner.”

Here is the FULL segment from MSNBC. (You can catch the brief “taco trucks” here.)

We are playing the full segment because Gutierrez wasn’t accurate at all in his sharing of data regarding Latino voters. We think he was quoting part of a Pew poll, but Joy Reid is right: when it comes to polling Latino voters, Trump is no way near close to 40%.

Nonetheless, Gutierrez has now circled his wagons and is blaming the leftist media for how he was treated and for all the trolls. (Yo, Marco, welcome to the Internet. Get a tougher skin.) As an “official” press statement from Latinos for Trump states: 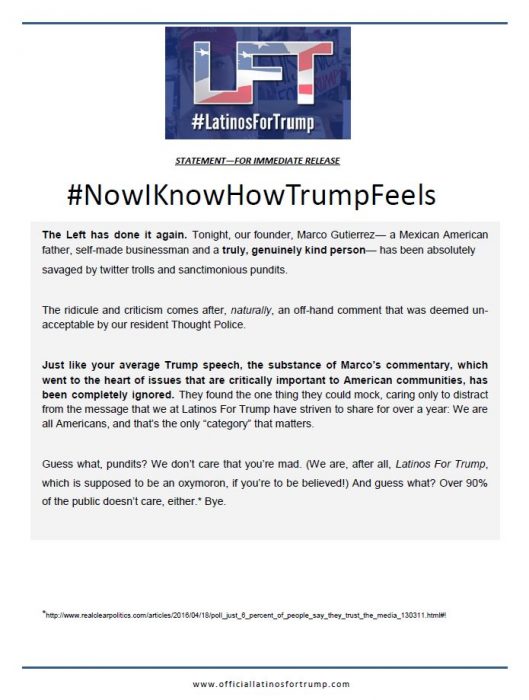 Yes, that is the response from Latinos for Trump. And before you keep laughing, you need to understand, Gutierrez is bragging about his appearance and has his Trumpistas helping him out. Here are just a few examples of how the media is to blame for all this:

Keep up the awesome work Marco! Ignore these ignorant trolls and haters! ??

Let the pathetic, immature, racist leftists who are the MSM scream all they want. This is a movement! #trump

Yet the bigger question is this: what does the Trump campaign think of what happened last night? Will this be Gutierrez’s last stand? Because in the end, even with Trump’s immigration speech this week and a high-profile visit to Mexico, all you need to do is read #MoreTacoTrucks and #TacoTrucksOnEveryCorner:

Glad to see #TacoTrucksOnEveryCorner is still trending this morning. We must stand against this anti-taco rhetoric. #ImWithTacos

Official @HillaryClinton account gotta use #TacoTrucksOnEveryCorner or it's a gaffe tbqh

Also, a taco truck in every corner is not only the best idea but it should be the MFing law. GTFO w/ your #Trump pendejadas. #MoreTacoTrucks

Taco trucks on every corner: my idea of heaven. #moretacotrucks