What Vin Scully Means to Me 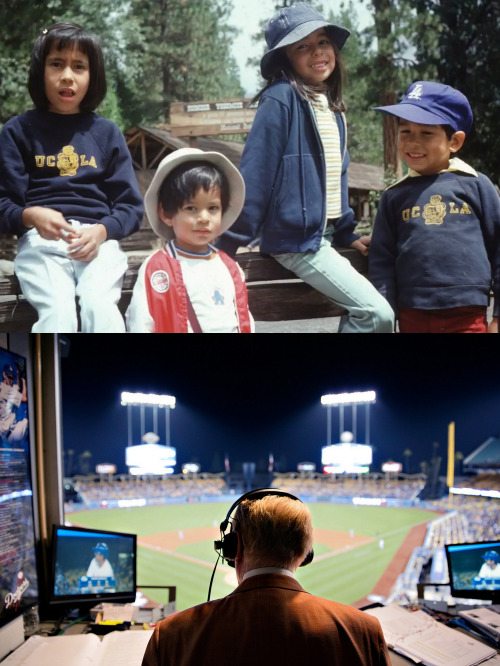 I’ve been blessed with a few things that I’ve been able to count on my entire life. My parents. My family. And Vin Scully.

We’ve always rooted for Dodger Blue. Memories of hanging out in the backyard or stuck in traffic, listening to Vinny on the radio. Sitting in my Grandpa’s living room in the former orchard lands east of San Bernardino messing with the bunny ears to get the static-y signal just right so we can watch the game and hear Vinny Scully give the play-by-play.

The first time I heard about a young pitcher from Sonora, Mexico, named Fernando Valenzuela was from listening to Vin. I learned about pitchers and players like Orel Hershiser and Steve Sax, and Dodgers legends like Roy Campanella, Sandy Koufax and of course Jackie Robinson. And then there was Vin Scully’s 1988 World Series Game One call of Kirk Gibson’s walk off home run against Dennis Eckersley and the Oakland A’s, judged by many to be the most dramatic home run ever. So iconic, memorable and incredible.

The Dodgers have been a baseball organization for over 130 years, and for over half of that time Vin Scully has been their announcer.

I’ve been blessed to be able to raise a son whose interest in baseball and the Dodgers rivals mine (also his interests in the A’s and the Mexican National Team, too!). I think back to all those days gone by in LA listening to Vin Scully call the game on the radio while we were in the backyard. I think about all the times I’m made an excuse to grill outside my own Oakland home, just so I can stream Vinny on my Bluetooth speakers. I think about how often I’ve been able to share these same experiences with my boy. And while I will always savor the last Dodgers home game Vin Scully will ever call, I will do so happy—happy for all the life and love of the game he gave me (and my son!), happy that my family got to go to Dodger Stadium Saturday night and see Vin lead the crowd with “Take Me Out to the Ballgame”, and happy knowing a man who has given 67 YEARS of his life talking and sharing the Dodgers with us fans will finally be able to turn off his mic and spend his golden years with his own family and friends, talking about baseball or whatever he wants to talk about.

We won’t always have Vin, but we’ll always have the memories, and we’ll be that much better off knowing he was in our lives.

Joel Tena is a proud father, husband, son, Mexican. When he’s not lovingly arguing with his son as to who should be Barcelona’s starting goalkeeper, he’s in the streets of Oakland fighting for social, racial, and economic justice. He tweets from @joeltena.