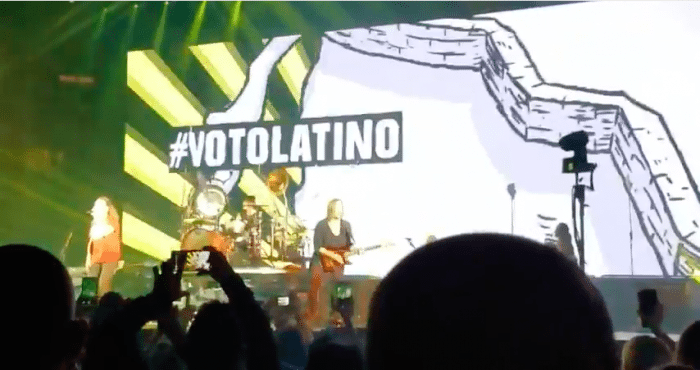 This Monday, I was in Madison Square Garden for Maná’s “The Latino Power Tour.”

I’ve tried to make Mana’s concerts whenever they come to New York City. I’ve been following their music for close to 25 years. There is probably very few non-Mexican, NYC born and bred Latinos who know this group like I do.

So it was striking the difference in this year’s tone during the concert. Maná has always had a political side, mostly about things that many artists already adopt as their causes—like calls for peace and environmental justice, two topics that while important, one would struggle to find a large group to deem them controversial.

This time, Maná made very clear that they had a message—and it was all about the 2016 election. The band’s front man, Fher, has been proclaiming this message throughout the tour in city after city: that the current GOP nominee for president is a racist, but that the power of Latinos (hence the tour name) is strong enough to defeat intolerance and dictatorship.

At the NYC concert, the band covered Bob Marley’s “Get Up, Stand Up” in English (a rarity) and changed some of the lyrics to emphasize voting and “Latino rights.” They then switched the background from animated “walls” being torn down by hands to the alternating flags of Latin America and the Caribbean. During this time, Maná addresses the crowd directly saying (translated):

For many years we have been working with our songs and our message, but we are now living a historic moment. Why? Because we now have a candidate who does not like Latinos, who does not like Mexicans. I get the feeling he’s kind of racist. Ok, no problem. In 2016, Latinos have gained a lot of power and here Latinos and Mexicans have to be respected. We do not want the United States to become a country where raids are taking place, here and there, from house to house, business to business, from city to city asking about your appearance, your last name, asking for your ID. You know, the police asking ‘give me your fucking ID’. Fuck You! We will not go back to that time in Germany, of Hitler. Here, Latinos are respected. Go out, go out, go out to vote and show them your power. Don’t get lazy because after all Latin America has made this country great too.

The message was direct, and uncensored, and it was a far change from the peace and love messages of the past. Throughout the sequence hashtags of #LatinoPower and #VotoLatino (the group who partnered with LiveNation for the “Latino Power Tour”) were displayed throughout the arena.

The reaction was intense. It was less an appreciation of the artist’s words and more a response to a rallying cry.

If the desired effect from the band was to remind them that there was power in numbers, the sold out stadium understood.

There are many who doubt the power of the Latino vote. For example, former Arizona governor Jan Brewer recently told supporters that they need not worry, because Latinos don’t vote and the state will stay red in November.

But if the demeanor of the concert and the band’s words are any indication, this attitude, and the comments and policies of the GOP flag waver, have FINALLY awakened the sleeping giant. In the key toss-up state of Florida, for instance, early voting among Latinos is up 99% from 2012. Organizations that encourage Latino participation are mobilized and working overtime to make sure there are record numbers of registered Latinos as well.

We will see how the participation rates are after November 8, but every indication is that Latinos are seeing this year’s election as being a referendum of their place in America, both literally, as immigration is on the forefront of the discourse and a major political party has mobilized the nation’s xenophobes and racists against them, yes also symbolically, as the country watches to see if Latino Power is real and can impact the national stage, or it is simply a catchy title of a concert tour.

Born in the Bronx, New York and currently a New Jersey resident, Miguel has written multiple entertainment reviews and political opinion pieces for online publications including CNN.com, HLN.com, the Huffington Post, Llero.net and The Father Life, an online magazine for dads. You can follow him @miguad98.