On Monday morning, we received the following words from Herman Baca, President of the Committee of Chicano Rights (CCR) about the death of Ramón “Chunky” Sánchez:

“A good man, an extraordinary musician and a tireless Chicano activist” 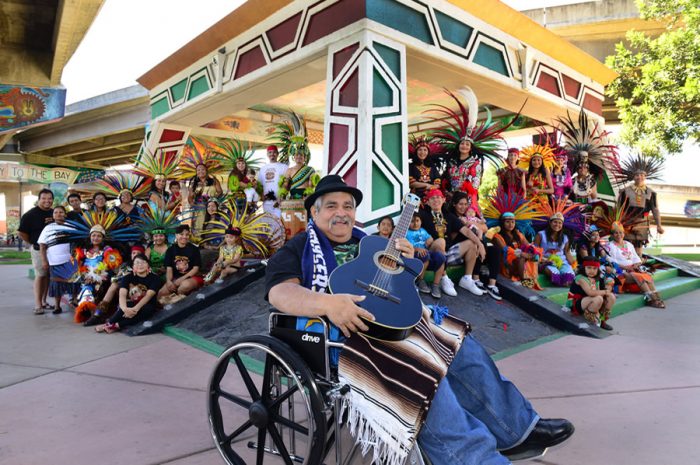 Ramón “Chunky” Sánchez 2013. Photo by Tom Pich via The National Endowment for the Arts

It was with a sad and heavy heart that we heard of the passing of beloved Ramón “Chunky” Sánchez. To Isabel Sánchez, the entire Sánchez/Enrique families, our deepest and most sincere condolences from the CCR, the Chicano/Mexicano/Latino community and my family. I first met Chunky in the early 1970s at SD State, at a rally where Chunky was a student. At the time, both of us were doing what we were to do for the next 45 years, Chunky playing and singing (then with La Rondalla Amerinda, later with Los Alacranes Mojados) and I speaking. We hit it right off, since the both of us were from two small rural agricultural communities: Chunky from Blythe, California, and I from Los Lentes, New Mexico.

In the preceding years (the 1970s), Chicana/os like Chunky and me, along with thousands in San Diego, heard the call to take action and struggle for self–determination—from the UFW, César Chávez, Hermandad Mexicana, Humberto “Bert” Corona, land grant advocate Reis López Tijerina, Crusade for Justice, Rodolfo “Corky” Gonzáles and Jose Ángel Gutiérrez of La Raza Unida.

The results in San Diego were the takeover of Chicano Park, Centro Cultural, Neighborhood House and the establishment of numerous community organizations. There were demonstrations against the Roman Catholic hierarchy demanding Chicano bishops, priests, nuns, etc; pickets in support of César Chávez’s grapes boycott; organizing the Chicano Moratorium against the Vietnam War; protests to end police brutality and abolishment of the INS/Border Patrol; strong demands of educational institutions to hire Chicana/o teachers, professors, administrators; establish bilingual education, Chicano Studies and programs for Chicana/os students to attend colleges; and politically, the organizing of La Raza Unida Party to register Chicana/os to elect candidates.

Chunky’s weapons for the Chicano Movement’s struggle were his guitar and music. His music was the political cement that kept the Chicano Movement in the community together (for over 45 years) in our struggles for self-determination to end the systemic racism and discrimination against our people. To me personally, without a doubt, Ramón “Chunky” Sánchez, along with Little Joe from Texas, are the two best-known and beloved contemporary musicians to come out of the Chicano community. César Chávez is quoted as stating that Chunky was his favorite musician. In my opinion, Chunky was every Chicano/Mexicano/Latino’s favorite musician that ever heard him sing or play. His music expressed the pain, hurt, joy, success and progress of all poor people, but especially his own people: Chicanos/Mexicanos. In 2013, the National Endowment for the Arts’ National Heritage Fellowships bestowed and honored Chunky with the country’s highest honor in folk and traditional arts. Chunky joined legends such as blues giant B.B. King, gospel music great Mavis Staples,  Nati Cano’s Mariachi Los Camperos and bluegrass pioneer Bill Monroe. As long as there are Chicanos/Mexicanos, Chunky and Los Alacranes’ music will live forever!

Politically, Chunky was an institution, el Corazón y Alma del Movimiento Chicano y su gente: Chicanos/Mexicanos/Latinos. Personally, I can attest that Chunky for close to 50 years donated his time and music to lifting el espíritu de nuestra comunidad y gente, IN ALL OF OUR STRUGGLES! There is not one community organization that Chunky didn’t help—from Chicano Park, the UFW, the Crusade for Justice, CCR, Centro Cultural, MEChA, Unión del Barrio, the Brown Berets, car club, veterans, seniors and especially our youth. His musical and political involvement with the Chicano movement and our people extended from SD, all of California, the entire Southwest, the U.S. and Mexico. In closing, as I have stated before, an era is slowly but surely coming to an end.