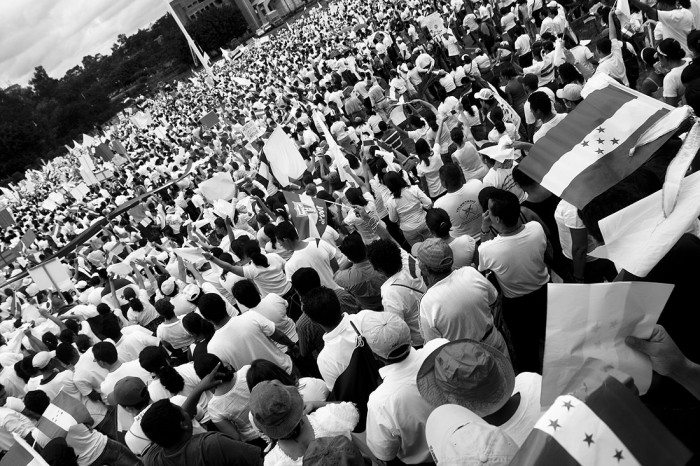 On June 28, 2009, when Hillary Clinton was Secretary of State, a military coup overthrew the democratically elected president of Honduras, Manuel Zelaya. Under United States law, military aid to Honduras should have ceased immediately.

Zelaya had put in place free education and meals for children, subsidies to small farmers, lower interest rates and free electricity. He supported a 60% raise in the minimum wage and the recovery of indigenous farmers’ land rights.

In 2009, Zelaya was preparing for an upcoming election ballot, a non-binding resolution asking voters whether they wished to reform the constitution so that rural farmers would no longer be subjected to foreign corporate mining practices. The ballot question was scheduled for June 28, 2009. Early that day, armed military forces kidnapped Zelaya at gunpoint and took him to Costa Rica.

U.S. Ambassador to Honduras Hugo Llorens cabled Clinton that the kidnapping “constituted an illegal and unconstitutional coup.” Fifteen House Democrats, according to Adam Johnson for Foreign Policy in Focus, agreed and insisted Clinton and the State Department “acknowledge that a military coup has taken place” and suspend non-humanitarian aid “as required by law.” That did not happen, making it possible for military aid to continue to flow to military forces.

Yet this past April when New York Daily News columnist Juan González asked Clinton whether she had any “concerns about her role in the aftermath of the coup,” she misrepresented what had happened in Honduras. The Democratic presidential candidate replied that the U.S. had not declared the removal of Zelaya a coup. Relying on a fine point of law which few would grasp, President Barack Obama declared it “not legal” and a “coup.” Obama did not, however, call it an “illegal” coup nor a “military” coup, which would have made cutting off military aid legally necessitated. Nonetheless, by November of 2009, Obama had walked back on even that and was pushing for an election in Honduras rather than the return of Zelaya to his democratically elected position. Dana Frank, a professor of history and expert on U.S. relations with Honduras, replied to Clinton’s remarks to González by calling it “chilling that a leading presidential candidate would say this was not a coup… She’s baldly lying when she says [the United States] never called it a coup.”

Nonetheless, at the time of the coup it seemed obvious to dozens of countries and organizations around the world that the overthrow of Zelaya was illegal, a violation of international law and dangerous to the concepts of national sovereignty, democracy and constitutional order. Many announced they would not recognize a replacement government.

On the other hand, an American organization which financially supported the coup was the Millennium Challenge Corporation, which made $17 million available to support the coup before it happened. At the time, Hillary Clinton was chair of MCC’s board of directors.

An election was set to choose a new president. According to Lee Fang for The Intercept, “major international observers, including the United Nations and the Carter Center, boycotted the election.” Nonetheless, Porfirio Lobo became the country’s new president

Clinton has admitted she used the power of the State Department to support the coup: “In the subsequent days [after the coup] I spoke with my counterparts around the hemisphere,” Clinton wrote in Hard Choices. “We strategized on a plan to…render the question of Zelaya moot.” In other words, Clinton and the State Department did not want Zelaya back in power, even though he was the democratically elected president of Honduras. This section has been edited out of the paperback edition of her book.

Since 2009, the military coup catapulted already impoverished and violent Honduras into greater poverty and violence

This past March, in an article for The Nation, Greg Grandin, who had covered the coup in 2009, wondered if Clinton was “still proud of the hell she helped routinize in Honduras” as a result of the military coup. Her Director of Hispanic Media, Jorge Silva, replied that both the question and the characterization were “simply nonsense”.

“The homicide rate in Honduras, already the highest in the world, increased by 50 percent from 2008 to 2011; political repression, the murder of opposition political candidates, peasant organizers and LGBT activists increased and continue to this day. Femicides skyrocketed. The violence and insecurity were exacerbated by a generalized institutional collapse. Drug-related violence has worsened amid allegations of rampant corruption in Honduras’ police and government. While the gangs are responsible for much of the violence, Honduran security forces have engaged in a wave of killings and other human rights crimes with impunity.”

According to Annie Kelly, women began to be murdered at the rate of one a day. In the month following the coup, according to Oxfam Honduras, there was a 60% rise in the number of femicides. In that month, the bodies of more than 50 women, in assassinations related to their gender, were found in Tegucigalpa and San Pedro Sula. The report accused the Clinton-backed Lobo government of complicity in the femicides. By 2011, there were reports of 1,110 femicides.

The Mara gangs were among those who killed, raped and threatened women with the deaths of their families if they resisted.

Hundreds of women and children fled to the U.S. American University professor Adrienne Pine concluded that “if it weren’t for Hillary Clinton,” there would not have been the “refugee crisis from Honduras at the level that it is today.”

In 2014, at the height of the surge of Central American women and children into the US, Clinton unsympathetically told Christiane Amanpour that, it was “safer for the children to remain in the US,” but they “should be sent back”. Dozens were returned to their deaths.

The most well-known of the women who were murdered in Honduras was Berta Cáceres.

On the day of the coup, the Inter-American Commission on Human Rights placed Cáceres’s name on a list of people whose lives were in danger because of the coup and said that military forces had surrounded her home. Cáceres was known for protesting illegal logging, plantation owners, and the presence of US military bases on indigenous Lenca land.

In 2014, Cáceres singled out Clinton for her role in the Honduran coup:

On March 3, 2016, Cáceres was shot and killed in her home by armed intruders.

The Honduran government was supposed to have protected her. In the days following the murder, Amnesty International condemned “the Honduran government’s absolute lack of willingness to protect human rights defenders in the country” and noted that the Honduran authorities had failed “to follow the most basic lines of investigation, including the fact that Berta had been receiving serious death threats related to her human rights work for a very long time.”

Did Hillary Clinton pull the trigger on Berta Cáceres? Did she carry out the military coup? Did she rape any young girl or woman in Honduras or threaten the lives of their families? Did she make vulgar statements about the genitals of women and girls? The answer to all these questions is, of course, “no”.

Yet, Clinton, as Secretary of State, actively supported and made possible the conditions which led to femicide, rape and other human rights violations in Honduras. Those who vote for her have a moral obligation to tell the truth about her. Common decency compels us to break the silence.

Rev. Ellin Jimmerson, PhD and MA in Southern History from Samford University, a Ph. D. in U. S. History from the University of Houston, and a Masters of Theological Studies from Vanderbilt Divinity School with a concentration in Latin American liberation theology. She is the writer and director of the award-winning migrant justice documentary, The Second Cooler, narrated by Martin Sheen. Jimmerson is the author of numerous published essays and articles on Latin America and immigration. She was a plaintiff in the case of HICA, et. al. v. the State of Alabama because of its anti-immigrant law, HB 56. The Southern Poverty Law Center represented her and other plaintiffs.