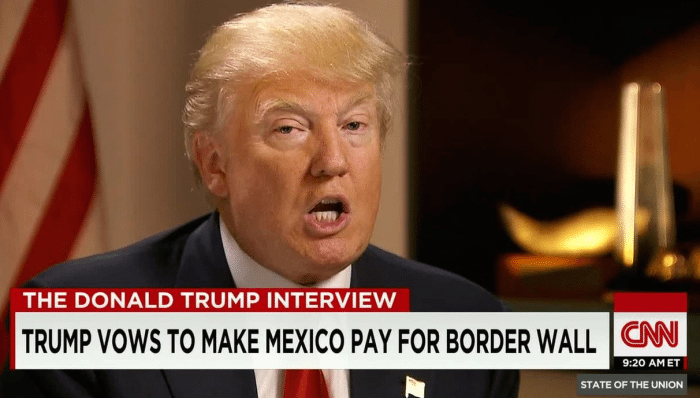 When I was small, my grandparents would tell me how the river used to roar through downtown El Paso. But while the Rio Grande was a force, the border itself… was not. Although there was struggle, there was also symbiosis, and hard-working people moved almost as freely as lazy riches.

I’m uncertain that world truly existed, but like many Mexicans and Chicanos growing up, I borrowed the nostalgia. In my lifetime, many borderlands have dried up. Together, Republicans and Democrats have sliced raw riverbed with 653 miles of fences, drones, and vigilantes.

Today, a petty tyrant pledges to complete the perversion with a wall so big and bad, it’ll stop tunnels and planes. And he’ll pay for it with a second-nature strategy: stiffing “the help.”

As Salma Hayek recently observed, “People don’t know about this.” The few pundits on the beat are scoffing. But a Trump administration could succeed. Although he’s unlikely to force the Mexican government to cut checks, Trump could make people he broadly considers “rapists” and “criminals” pay in the biblical sense — pay in such pain, that at least in Trump’s mind, immigration would ebb. Even without the wall, he could punish the United States, Mexico and other countries benefiting from remittances and the labor from which they flow.

The details are muddy. If by “impound,” Trump means freeze or seize, he’d have to overcome tough legal obstacles. Prevention or taxation would be easier. Overall, though, liberal mocking and giggling ignores reality: governments constantly roll in the guts of payments systems, to rare uproar. (It also doesn’t help that Trump himself now claims he will just have Mexico “reimburse” the U.S. for a border wall.)

We should take this more seriously. Indeed, the approach outlined in Trump’s memo —supposedly suggested by arch-nativist Kris Kobach— is needlessly complicated. To use the Patriot Act and its regulations, Trump would likely need to amend legislation. He’s right that Section 326 requires the Treasury to establish minimum standards for verifying customer identification. Banks and money services businesses (like Western Union) must collect sender ID for transactions above $3,000. They must also cross-check terrorist lists and report “suspicious activity.” But they needn’t screen for lawful immigration status.

Although Trump cites the wrong regulations, he presumably wants to change the relevant rules so no “alien” may transfer money anywhere outside the U.S. without proving lawful presence. But absent twisted interpretation, there doesn’t appear to be sound footing in Section 326. Western Union and others would sue. The wall referendum would move from the streets to the courts.

Recently, even broader regulation has squeezed folks out of the financial system. For example, banking executives have compared Trump’s proposal to the Obama Administration’s Operation Choke Point. Under the 2013 operation, the Department of Justice investigated banks processing payments for potentially fraudulent companies. Relatedly, in 2011, the Federal Deposit Insurance Corporation published a list of categories of “high-risk” merchants, including money transfer networks, but also gun dealers, sex workers and payday lenders. Critics claim these combined actions pressured financial institutions to terminate relationships with specified businesses (and thus their customers). Trump may propose mammoth cruelty, but there’s history of enforcement and supervision causing financial exclusion. If Trump bellows about immigrant lawbreaking and expands on tactics libertarians and conservatives claim to hate, he could prevail.

As we well know, when it comes to immigration policy, the government habitually builds machinery easily manipulated by monsters. Fortunately, as far as remittances go, we can reform. 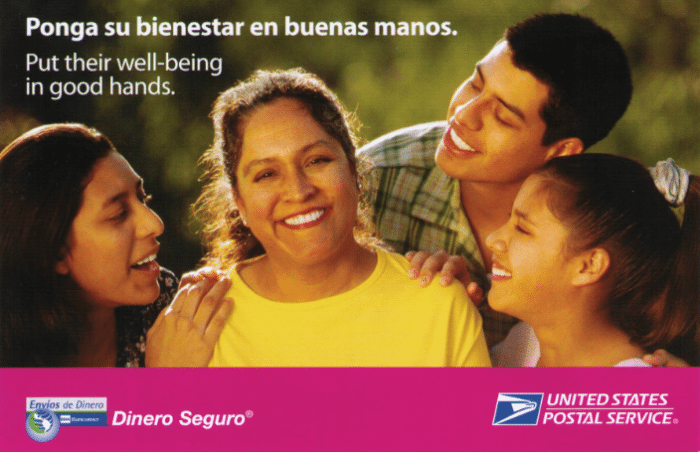 The USPS Inspector General recommends expanding these programs, linking to international electronic postal payment networks and cutting costs with new technology. We need safe, affordable services outside government. But within the postal system, remittances can be better insulated from the backroom caprice of tyrants and tycoons alike. USPS must follow constitutional and administrative law standards and respect a right to contest arbitrary state action. Although USPS must also follow anti-money-laundering rules, it needn’t screen small-dollar customers for lawful presence either. As a general rule, unlike private businesses, USPS only collects information necessary to satisfy a statute or executive order. Thus, the postal system can become a more accountable, more transparent, public option.

Overall, platforms for basic financial flows should be treated more like utilities—as critical as water or electricity. Everyone, especially immigrants, deserves affordable service. Opposite stands the racket of Trump: a man who grips other people’s hard-earned money, but either doesn’t grasp, or doesn’t respect, its dignity.

Time and time again, Trump has proven he only cares about the shades of working people who prop up Trump. Despite promising an end to “intrusive regulations”, he foreshadows a future of tiny tangerine fingers, poking around our plumbing, forever. Trumpism must be defeated. Then, instead of a shameful wall, we can build the infrastructure necessary for truly freer streams of commerce, open to everyone.

Raúl Carrillo is a former financial regulator and an organizer for the Modern Money Network, an interdisciplinary educational initiative for understanding money, finance, law, and the economy. He is a New Mexico native, now living in New York City. You can follow him @RaulACarrillo.