Why This Young Latinx Is With Her (OPINION) 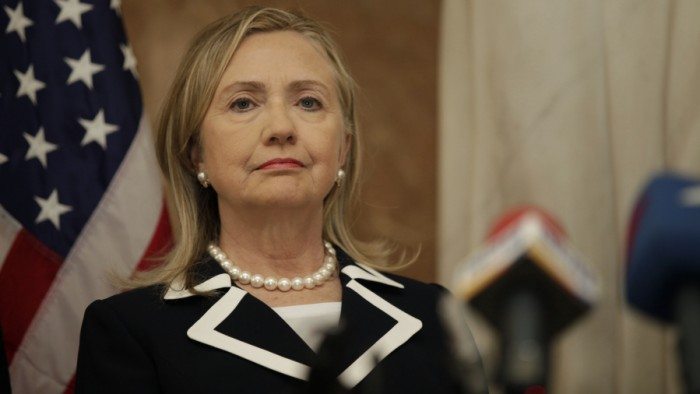 Hillary Clinton has secured the Democratic nomination for president of the United States, and has received endorsements from numerous publications and politicians.

The electoral projections place Hillary Clinton in the Oval Office come November 8 The Latinx vote has been one of the deciding factors, placing her on the precipice of making history. Yet, despite such record turnout from the Latinx electorate, what besides the obscene campaign of Donald Trump, has gained the allegiance of the Latinx electorate?

There is a need for drastic comprehensive immigration reform, and Clinton has showcased a desire to provide significant solutions to the issue. She calls for the end of the three- to ten-year bans and for defending Obama’s executive actions, the Deferred Action for Childhood Arrivals (DACA) and Deferred Actions for Parents of Americans (DAPA).

The end to the three- to ten-year ban would be in blatant contradiction to the legislation her husband, Bill Clinton, signed as President of the United States. The Illegal Immigration Reform and Responsibility Act of 1996 was passed, and introduced the these bans, breaking up families in the process.

The impact is detrimental to those families affected by the “unlawful presence” bars. The ban was incorporated into section 212(a)(9)(B) of the Immigration and Nationality Act. Hillary Clinton vows to end the provision, and perhaps, she will do so, but it is not absolute. The recent decision against Obama’s executive action (DAPA and expanded DACA) has proven that the repeal of such a provision is unrealistic. The opposition to Obama’s executive action, all but assures the same reluctance to accept executive action levied by Hillary Clinton. 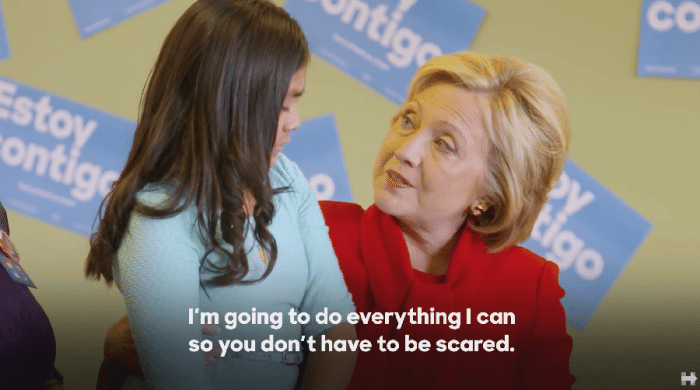 The litigation that prevented the implementation of DAPA is nothing, if not a setback. Clinton must press forward to pass comprehensive immigration reform, and avoid the mistakes that were made under the Obama administration. The repeal, however, has not done nothing but place an antiquated view on immigration law, DAPA and expanded DACA are constitutional. Where Obama was blocked, Clinton must push onward. It goes beyond press statements.

However, despite such opposition, Clinton looks to avoid the historical trend of Democratic presidents faltering in regards to immigration reform. Where Bill Clinton created the militarized southern border, and failed in his efforts for passing comprehensive immigration reform, Hillary has the opportunities in front of her to be progressive in her dealings with immigration reform.

She has the tools, and now the electorate, to make profound and lasting change to immigration reform that will not victimize those people who wish to escape political and economic in their homelands, or, wish not to live in the shadows.

The United States is in major need of major criminal justice reform. Clinton has promised to combat such a broken system, by ending the use of private prisons, the end of racial profiling, and, combating the issue of mass incarceration. Clinton must first accept her role in advocating for prejudicial legislation and remove herself from the troubling relationship she has with criminal justice reform.

In 1994, Bill Clinton signed the Violent Crime Control and Law Enforcement Act, a piece of legislation that has become quite controversial. The crime bill has placed Hillary Clinton in a rough place, as her proposals for racial justice and criminal justice reform appear to showcase a political evolution. That being said, her support of the 1994 crime bill cannot, and should not, be ignored.

Clinton must address this, and reverse the policies passed during the administration of her husband, that saw the creation of the militarized police-state, the breakdown of the law of habeas corpus, and the increased presence of a militarized southern border (see; National Defense Authorization Act for Fiscal Year 1997, Anti-Terrorism and Effective Death Penalty Act, and IIRIRA).

The polices of her husband place Hillary Clinton in a precarious position. She serves as the counter to the strategies of 20 years ago, which sought the vote of the white working class. Clinton faces pressure from a populist revolt, one that forced her husband to sign legislation that has made victims of the demographics that she now courts (African-Americans and Latinx).

She must not defend the polices of her husband, she must move far away from the “tough-on-crime” reforms of the 1990s. Clinton caters to a new audience, an audience that has lived in relative squalor and disenfranchisement, as a result of her husband’s policies. She must do everything in her power to earn their trust and gain their support, her survival in office depends on it.

An Attack On Voting Rights

The Voting Rights Act of 1965 was a landmark piece of legislation created to combat racial discrimination in voting. The VRA guaranteed that:

“No voting qualifications or prerequisite to voting…or procedure shall be imposed…by any State…to deny…the right of any citizen of the United States to vote on account of race or color.”

The legislation has not gone without challenges, despite the original purpose of the law serving as the enforcement of the 15th Amendment. For Clinton, advocating for equal voting rights is a core issue.

The Supreme Court, in Shelby County v. Holder, gutted the Voting Rights Act, declaring in a 5-4 decision, that the coverage formula for section 4 was outdated and unconstitutional, “its formula…can no longer…be used as a basis for subjecting jurisdictions to preclearance.” The Court was wrong, as the flurry of voter suppression laws passed in the aftermath (see: Senate Bill 14 Texas, House Bill 589 North Carolina).

Two cases levied against the state of Texas and North Carolina (see; Veasey v. Abbott and North Carolina Chapter of the NAACP v. McCrory) showcase the deliberate action, and conservative fetish of suppressing the vote of colored minorities.

The importance of a Clinton cannot be overstated. Lawsuits filed against the North Carolina State Board of Elections by the North Carolina chapter of the NAACP reveal the lengths to which African-American voters were purged, and stripped of their constitutional right to vote.

A temporary injunction was filed restoring the disenfranchised voters to rolls, but, the damage has still been done. The judge’s order does nothing to remove the historical stench of the disenfranchisement of colored people in terms of voting.

Clinton has been vocal about the ideological fallacies of the conservative movement which claims “rampant” voter fraud exists. The victims of such rhetoric have been and will continue to be African-American and Latinx voters. Clinton has confronted such realities, and plans to institute sweeping measures for to ensure voting rights for minorities.

For Clinton, exposing the hypocritical narrative of the conservative attack on voting rights is critical. It means that long-lines and lack of resources attributed to precincts with a particular demographic (non-white majorities) must be

Clinton and her plan is bold, it would further provoke a Republican Party that has admitted to obstructionist tactics should she get elected. She is the candidate that has woken up the “sleeping giant,” providing the liberal alternative to the bombastic, demagogic conservative option. She serves counter to a political machine that brags about low-African American voter turnout.

One Last Case for Clinton

The 2016 general election is drawing to a close, and the next four years will be decided on November 8. That is not hyperbolic. The decision tomorrow will determine if the United States becomes a conservative and authoritarian state, or a liberal and progressive state.

The election has come down to the realization that a future with Hillary Clinton is far better than a future with Donald Trump at the helm. There can be disagreements in policy, her past record, however, now is the time to hold her accountable and ensure her rhetoric from the past year and a half on the trail is executed.

Voting does not end our relationship with Hillary Clinton. It is paramount that our vote places her in office, but, it is just as critical that our activism and attention to the issues that plague our people reach her as well. Hillary does not deserve our vote, she must earn it, however, it is up to us to ensure that she serves the better interest, rather than place blame and do nothing to change her political stances.

Our vote for Hillary Clinton ensures her place in the Oval Office. Our activism ensures that she stays true to the progressive ideals that she championed throughout the primaries and come January 21, our support will lay the groundwork for an impactful first 100 days of her presidency.