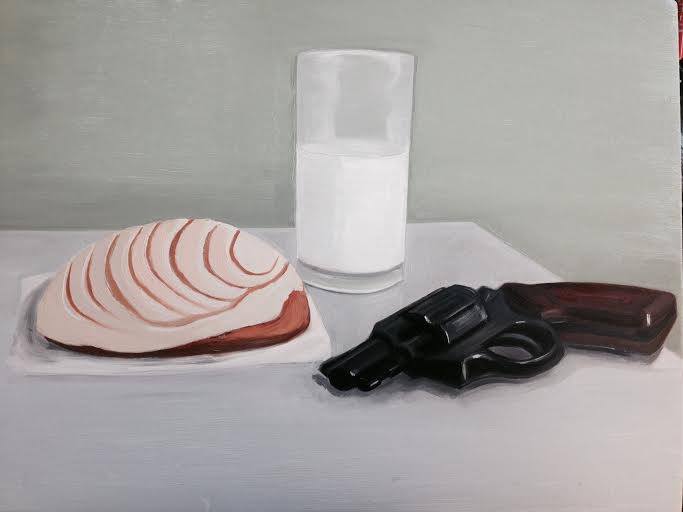 Note: This short story first appeared in the literary journal, ZYZZYVA—the last word: west coast writers & artists. While a true story, the names of non-family members have been changed.

My father, Salomón Chávez Huerta, never left home without his gun. It was a sleek .38 Special revolver, which he tucked it in his left cowboy boot whenever he took a walk in our neighborhood, East Los Angeles’ impoverished and violent Ramona Gardens housing project. Better known as the Big Hazard projects—the name of the notorious gang.

My father grew up on a small rancho in Michoacán, where rural communities are famous for their bloody family feuds—similar to the famous McCoy-Hatfield feud in Appalachia. My father, the eldest of ten, led the Huerta-Gómez family rivalry during the 1950s. It took the lives of dozens of family members on both sides and forced many to flee to el Norte.

After losing his brother Pascual to the deadly family rivalry, my father and family members moved to Tijuana (Baja California, Mexico) and then to Los Angeles. Little did he know that he relocated his family of ten from one violent place to another one.

When we first moved into Ramona Gardens, my older brother Salomón and I didn’t leave our house for a week. Once we did, a local posse of kids awaited us. Tomás, the leader, arranged a fight between us and two other neighborhood kids. It was a traditional welcome to the neighborhood.

One day, a couple of years later, Tomás and Fat Ritchie decided to swing my younger brother from his arms and legs until he cried for help. My father ran to save his wailing son. As he pushed Tomás away, Tomas’ mother attacked my father from behind. Like a Mexican luchador, my father slammed her to the ground and fled the scene.

Later that evening, my father got word that Tomás’ older brother, Chuco —a respected gang leader who had done time in Folsom for attempted murder— was looking for him to take revenge.

Unable to locate my older brother, my father summoned me to his room.

“Álvaro, come to my room, I need to talk to you,” he said in his typical stoic demeanor.

“Okay,” I said, wondering what I did wrong.

“Here, take my gun,” he said casually. “Put it under your belt in your backside. I want you to come outside with me. I need to talk to Chuco.”

It was cold that night, as my father and I walked around our brick building looking for Chuco. My knees began to shake and my heart pounded, as we approached a bunch of homeboys drinking a 12-pack of Budweiser.

“That’s them,” my father said.

“I think we should call the cops,” I said innocently, not yet mastering rules of the projects.

“What for?” he said. “Don’t you know that the cops are just another gang.”

My father walked straight to the homeboys. He was holding a small, paper bag.

“Chuco, is that you?” he asked the homeboys.

“What is it, old man?” came a voice from the darkness.

“There’s nothing to talk about,” said Chuco. “I already know the whole story.”

My father slowly reached into the paper bag.

“You better stay back or else,” Chuco said, putting his hands in his Pendleton coat pockets.

Instead of reaching for my gun, I froze and braced for the worst. Some instructions from my father would’ve helped!

Undeterred by Chuco’s threat, my father pulled out a small bottle of Jose Cuervo Tequila (Especial Gold) that he purchased on his regular mandados or errands to Tijuana. (Apart from the tequila, he never failed with the delicious pan dulce.)

Slowly, like the ways homeboys usually operate, Chuco took his hands out from his pockets and reached for the bottle.

“You have a lot of guts, old man,” he said, giving my father an abrazo.

“So, everything’s fine?” my father asked for assurance.

“Everything’s cool,” said Chuco. “You could’ve called the cops, but you approached me like a man, so I’m going to forget about what everything.”

Relieved, my father returned for me, where I was still shaken up, and said, “Let’s go back home before we miss the ‘Bonanza’ rerun on television.”

Many years later, as I reflect on this almost deadly encounter, I say to myself, “There’s nothing better for a 13-year-old kid from the projects than to spend quality time with his father!”