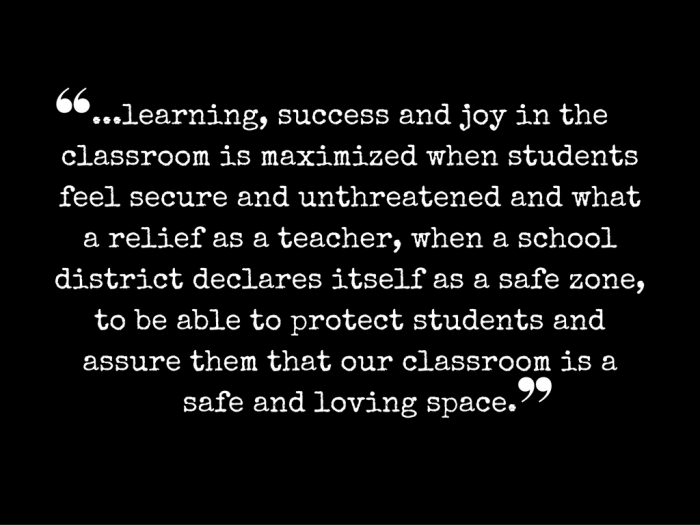 Over the past month, a wave of K-12 California public schools have declared themselves a “Safe Zone” with Montebello Unified, the third largest school district in Los Angeles County, becoming the movement’s most recent participant.

Montebello High School senior Metztli Hamelius is “happy that the resolution unanimously passed because undocumented students and families as well as LGBTQ+ and communities of color will now have access to important ‘know your rights’ information, especially with all of the incidents of hate speech occurring throughout the nation.”

Initiated in 1979 by Los Angeles, sanctuary cities refrain from using municipal resources to enforce national immigration laws and forbids municipal employees to inquire about a person’s immigration status. Currently, there are more than 39 major sanctuary cities across the United States (300 jurisdictions) and rapidly increasing. California has the most sanctuary cities —Berkeley, Coachella, Los Angeles, Oakland, Sacramento, Salinas, San Bernardino, San Francisco, San Jose, Santa Ana, Watsonville, and Williams— and is at a higher risk of losing federal funding than any other state in the nation.

Stemming from sanctuary cities, a growing number of California public schools are declaring “Safe Zone” schools and campuses in both K-12 and college, which has evolved into a movement focused on raising the importance in safeguarding vulnerable communities against unlawful discrimination directed at the undocumented, the differently-abled, females, LGBTQ+ community, Muslims and all religious groups, and students of color who have all been mentioned in President-elect Trump’s statements.

At institutions of higher learning, “Safe Zone” schools build on the 1980s Sanctuary Movement and focuses on valuing and protecting all members of the community as well as providing confidential counseling and legal services for students.  For K-12 public schools, a “Safe Zone” seeks to protect the data and identities of students, family members and school employees consistent with federal and state law, an additional safety net for undocumented students who are guaranteed access to public education resulting from the 1982 United States Supreme Court case Plyler v. Doe.

Leslie Hiatt, a fifth-grade teacher at Montebello Unified, expressed that “learning, success and joy in the classroom is maximized when students feel secure and unthreatened and what a relief as a teacher, when a school district declares itself as a safe zone, to be able to protect students and assure them that our classroom is a safe and loving space.”

School districts can create a safety net for all of its stakeholders. “Safe Zone” resolutions passed by Los Angeles, Bassett, San Francisco and now Montebello Unified seek to partner with local organizations to develop resource centers for families and students who face any type of harassment or threats of deportation as well as train school employees in accordance with the policy. In particular, Montebello Unified’s resolution also directs its Superintendent to establish an advisory committee that addresses immigration issues and policies impacting vulnerable communities (e.g., the LGBTQ+ community, females, etc.).

Mirella Flores, a Los Angeles Unified educator and parent of students attending Montebello Unified stated, “We are comforted by the fact that our district joins neighboring districts, universities, unions, local and state governments in taking a stance against hateful rhetoric and policies, because it is an extended protection to all members of our community.”

We need to protect our communities. There is a real and palpable fear of uncertainty as well as a critical need for collective responsibility by everyone who touches the lives of our youth. From state to local level, establishing sanctuary cities and Safe Zone schools remains a necessary step toward transformative justice and in building a more democratic and inclusive community.

Lani Cupchoy, Ph.D. teaches Chicana/o Latina/o Studies and History at California State University, Los Angeles and is the President of the Board of Education for Montebello Unified School District. This op-ed expresses her personal viewpoints and not necessarily that of the Montebello Unified School District Board of Education.