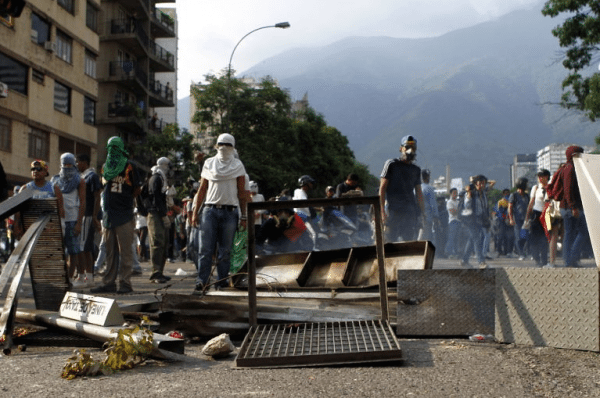 By RACHAEL BOOTHROYD ROJAS of venezuelanalysis.com

Caracas, April 27, 2017 (venezuelanalysis.com) – One Venezuelan died during an anti-government demonstration this Wednesday, after opposition leaders called on their supporters to march on the National Ombudsman’s office in downtown Caracas.

The death of Juan Pablo Pernalete Lovera (20) was confirmed by Chacao Mayor Ramon Muchacho Wednesday afternoon and brings the total death count of the last three weeks of opposition-led violence to 30.

“26 April At 2:50 pm approx. a young man of 20 from the demonstration was brought into @saludChacao [hospital] without vital signs… Our medical staff attempted cardiovascular resuscitation for 40 minutes without success,” Muchacho stated in a series of tweets.

The mayor did not speculate as to the causes of Pernalete’s death, but petitioned authorities for a full investigation. Meanwhile, private Venezuelan media has widely reported that the victim suffered a head trauma after authorities used tear gas on demonstrators.

Following the conclusion of the official march, violent disturbances broke out once again in Chacao, Altamira, and Las Mercedes in the east of the city, which saw opposition demonstrators clash with security forces and set fire to armoured anti-riot vehicles. Two soldiers from the Bolivarian National Guard were left injured by gunfire from “motorbikers contracted by the terrorist rightwing” in Altamira, confirmed Justice Minister, Nestor Reverol.

The minister also officially expressed his condolences for the death of Pernalete, and announced that an investigation had been launched. He called for those responsible to be punished. 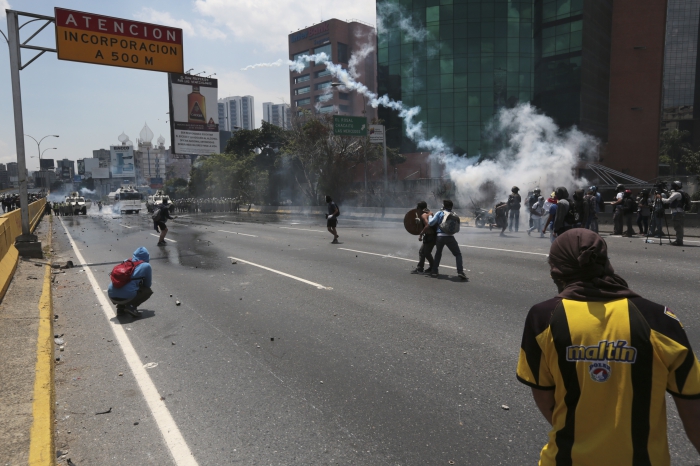 Violence erupted once again in the east of the city this Wednesday. (AFP) 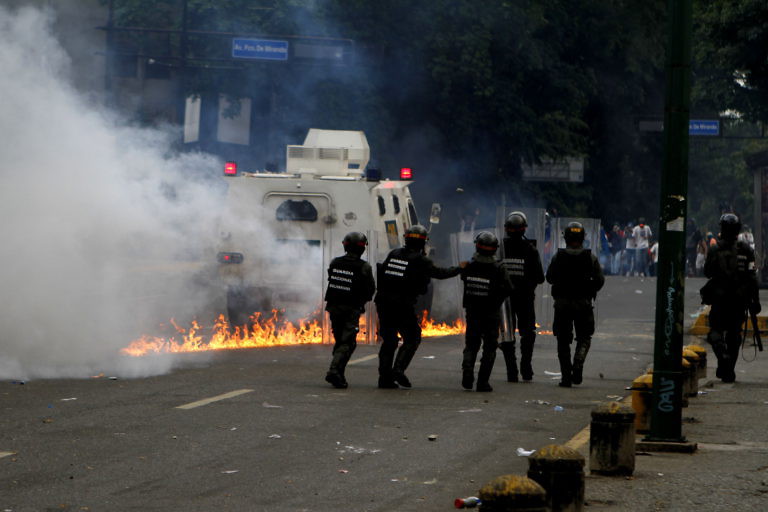 This Wednesday’s march was called after opposition legislators in the National Assembly (AN) threatened to launch an investigation into National Ombudsman Tarek William Saab unless he agreed to give the green light to their campaign to remove several Supreme Court (TSJ) judges.

The western Caracas municipality of El Libertador did not grant permission for the march route in a bid to safeguard government institutions in view of the intense violence and vandalism of the last three weeks.

In a series of tweets on Tuesday, the vice-president of the National Assembly and member of the far right Popular Will party, Freddy Guevara, revealed that the legislative body had “approved a lapse of 3 days, for Tarek W. Saab, Ombudsman, to activate the process to dismiss the judges.”

“When those 3 days given to the Ombudsman are up, the AN will move to consider him complicit in the coup and act accordingly,” added the politician.

Opposition legislators have been attempting to dismiss several Supreme Court (TSJ) judges since the top court ruled that it would temporarily assume the legislative functions of the National Assembly at the end of March. The TSJ says the legislature is currently in contempt of court for failing to unseat three opposition legislators under investigation for fraud and consequently cannot fulfill its constitutional duties.

Although the decision was almost immediately reversed in response to complaints that it had violated the balance of powers outlined in the Constitution, the opposition called on its supporters to indefinitely take to the streets, denouncing a “coup” against its majority in the National Assembly. But other leading public voices such as the constitutional lawyer Hermann Escarra and Ombudsman Saab have denied that the TSJ acted unconstitutionally.

Saab’s condemnation of the incident is absolutely vital if the National Assembly’s bid to dismiss the judges is to proceed. According to the country’s Magna Carta, the national Ombudsman must declare that a “serious offense” has been committed by a judge in order to begin a process whereby they may be dismissed by two-thirds of the national assembly.

Opposition legislators originally suggested that they would overstep the Ombudsman in their attempt to remove the judges, but changed their mind before calling for a march to pressure Saab this past Tuesday. The manoeuvre comes on the back of an opposition-led “sit-in” to “provoke ungovernability” this past Monday in which four people were killed, including two government workers from presumed opposition sniper fire.

But Saab hit back at the opposition’s ultimatum on Twitter following the march, accusing right-wing leaders of making “criminal threats” against the country’s citizen branch of government, and carrying out a campaign again him and his family.

“Before the national and international public I cite as RESPONSIBLE the political actors who gave the orders to attack us. I respond once more in a valiant way to the criminal threats: The Moral Council of the Republic [body headed by Ombudsman] already declared it on April 6th INADMISSIBLE to put magistrates on trial,” tweeted the national ombudsman.

“After a month of attacks and dirty war against us, and the national Ombudsman’s office, it is evident that the objective was not to protest under the guarantees established in the 99 Constitution, but to attack the citizen’s branch [of government] against DEMOCRACY,” he continued.

The national ombudsman also stated that his office was awaiting the autopsy and forensic results for Juan Pablo Pernalete Lovera in order to establish the cause of death.

Freddy Guevara had tweeted that Saab was personally “responsible” for the death of Pernalete earlier that afternoon.

Wednesday also saw continued acts of violence throughout the rest of the country. In Lara, opposition protesters set a government food-storage building alight with molotov cocktails. Some members of the National Guard and civilians suffered burns as a result, but no fatalities were reported. Several incidents of violence were also reported in Tachira state, on the border with Colombia, where the unrest has been particularly intense.

For his part, Tachira Governor José Gregorio Vielma Mora confirmed that Efraín Sierra, 34, had died on April 26 from a gunshot wound to the stomach after opposition protesters attempted to rob the victim’s motorbike at a roadblock. Efraín was a member of the United Socialist Party of Venezuela.

Mora also informed press that four citizens had been wounded, including three from gunshots, and a fourth from barbed wire that had been hung over the road by opposition demonstrators to maim motorcyclists. Eight National Guard soldiers, 24 national police officers, and 23 Tachira police personnel were also injured, the governor reported.

This story was originally published on April 27, 2017 on Venezuelanalysis.com