“Haciendo de tripas, corazones:“ Once Again, Puerto Ricans Rely on Each Other After a Natural Disaster 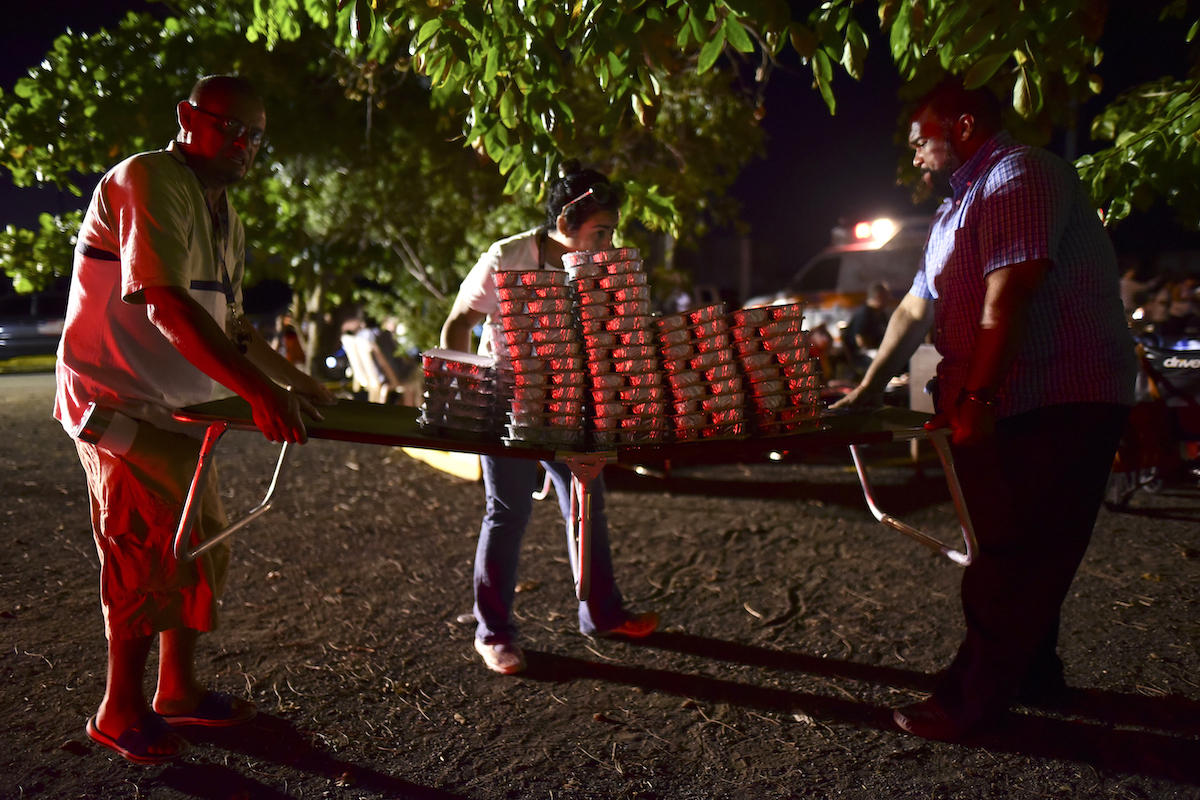 Volunteers move food for many refugees from Guánica that choose to remain outdoors for fear of possible aftershocks on their first night after a 6.4-magnitude earthquake struck Puerto Rico, killing one man, injuring at least eight other people and collapsing buildings, in Guánica, Puerto Rico, Tuesday, January 7, 2020. (AP Photo/Carlos Giusti)

It is not often that I wake up to over 500 new WhatsApp messages.

Actually, it had never happened before. But that was what my phone showed in the early morning of January 7. Those messages came mostly from two family chats I use to keep in contact with my relatives in Puerto Rico. One for my blood relatives and the other for my political family. By now you may have guessed they were about the earthquakes that shook Puerto Rico before sunrise.

It has been quite a frightful week for the people of Puerto Rico. On January 6, when most Puerto Ricans celebrate el Día de Reyes (the Epiphany), a 5.8-magnitude quake hit the archipelago before dawn. It was followed by landslides, power outages, and damages to private residencies. That earthquake followed a year of seismic activity that sharply increased in December.

The usual Reyes’ call to my relatives turned into conversations about the earthquake and what they were doing to prepare in case of a stronger one and a tsunami. To this day, the majority of my relatives live in Puerto Rico’s west and southwest coasts, most of them in zones prone to flooding and in the tsunami evacuation area.

An uneasy calm prevailed throughout January 6.

Then, just before 4:30 a.m. on January 7, a 6.4 magnitude earthquake hit roughly 8 miles off the coast of southwest Puerto Rico. It was followed some 10 minutes later by a magnitude 5.6 one and dozens of aftershocks. Like most Puerto Ricans in the diaspora, I woke up to that news. And like most people I’ve talked to, I receive the news from  relatives and friends through social media and apps.

This trend actually started in Puerto Rico during Hurricane María’s aftershock as most of the island lost communications.

I’m writing a very personal narrative of what I have gathered so far from my relatives and friends because it is a way of dealing with the anxiety of not being there with them in times of peril. For many of us in the diaspora or state-based, all we can do for the moment is make sure that there is a robust and effective federal response to the state of emergency that Puerto Ricans continue to live. This is of the outmost importance for we are still dealing with a White House that has purposely held relieve and reconstruction funds authorized by Congress following Hurricane Maria—two years ago!

In many ways, the White House policies following María have left Puerto Rico unprepared to deal with the new emergency. And somehow, small groups of relatives, neighbors, friends, and strangers prepared for the earthquake and immediately sprang into action after it. From people offering meals and housing to those who left the areas near the shore, to checking on each other and passing information on relatives and friends on social media—Puerto Ricans mobilized to help each other. It is more than likely that this solidarity and quickness to jump into action helped to keep the number of dead and wounded low.

“Haciendo de tripas, corazones,” a common Puerto Rican saying that means “plucking up the courage to do what needs to be done,” best describes what the people of Puerto Rico have been going through for over a decade now. I don’t mean to detract from the current emergency but there was María and Irma before that (and the archipelago has not recovered from it); and there was the economic, financial, health and demographic crises before all of this. Since 2006, Puerto Ricans have lived in a state of constant emergency. Even as they hacen de tripas corazones, living under such stress eventually takes its toll.

Throughout the day, I followed my family chats and even reconnected with old friends and acquaintances via social media. Just by looking at my social media it seems that the whole Puerto Rican diaspora is doing the same thing. Those I interacted with have the same message. “We are ok.” “We are anxious but safe.” “This is nerve wrecking, but I’m good.” 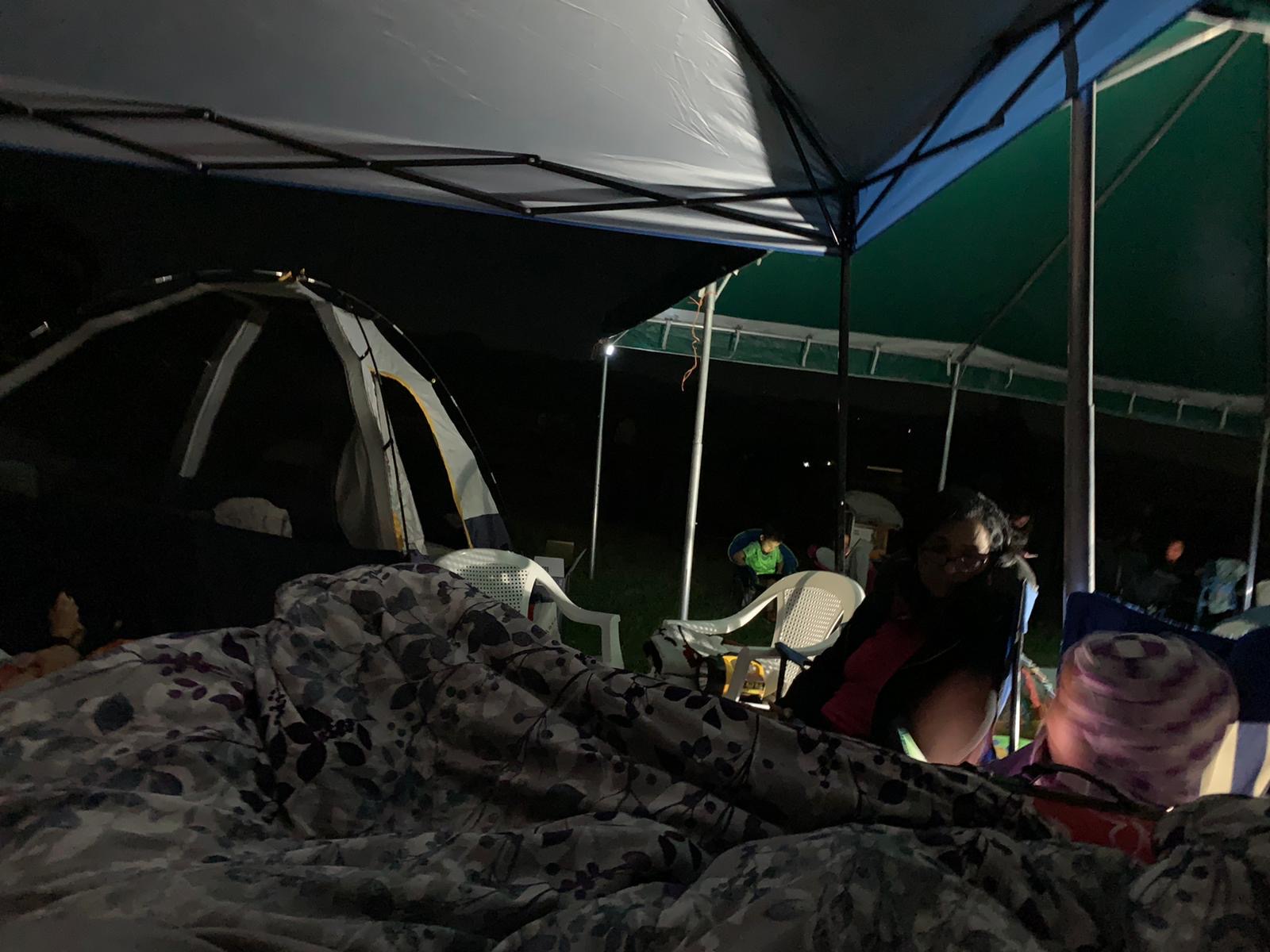 This photo shows sleeping arrangements at the home of the author’s niece in Yauco, Puerto Rico (Photo provided by the author)

While talking to a friend in the south coast city of Ponce, she suddenly got quiet. What is going on? I asked. “Sorry, it is trembling again. Or I’m imagining it. I can’t tell anymore.” She tried to make light of it; “Don’t worry, after María we are like cucarachas after the apocalypse. We survive everything.”

My friend was putting on a brave face—the same face Puerto Rico is putting on right now. But that can’t be the only response. We can’t just rely on the resilience and stoicism of the people of Puerto Rico. Puerto Rico needs an effective state and federal response to this new crisis. There are thousands of buildings and dozens of bridges, roads, schools, and stores destroyed or no longer safe after the earthquakes.

After another aftershock, she told me half in jest: “For sure I end up with PTSD after this.” I don’t blame her for thinking that. She and all of Puerto Rico keep going from one traumatic experience to another. She wasn’t alone in trying to make light of such a harrowing experience.  A widely shared meme shows Governor Wanda Vásquez and an unidentified man looking under some  debris with the caption “Puerto Rico finding a way to sleep after the earthquake.” 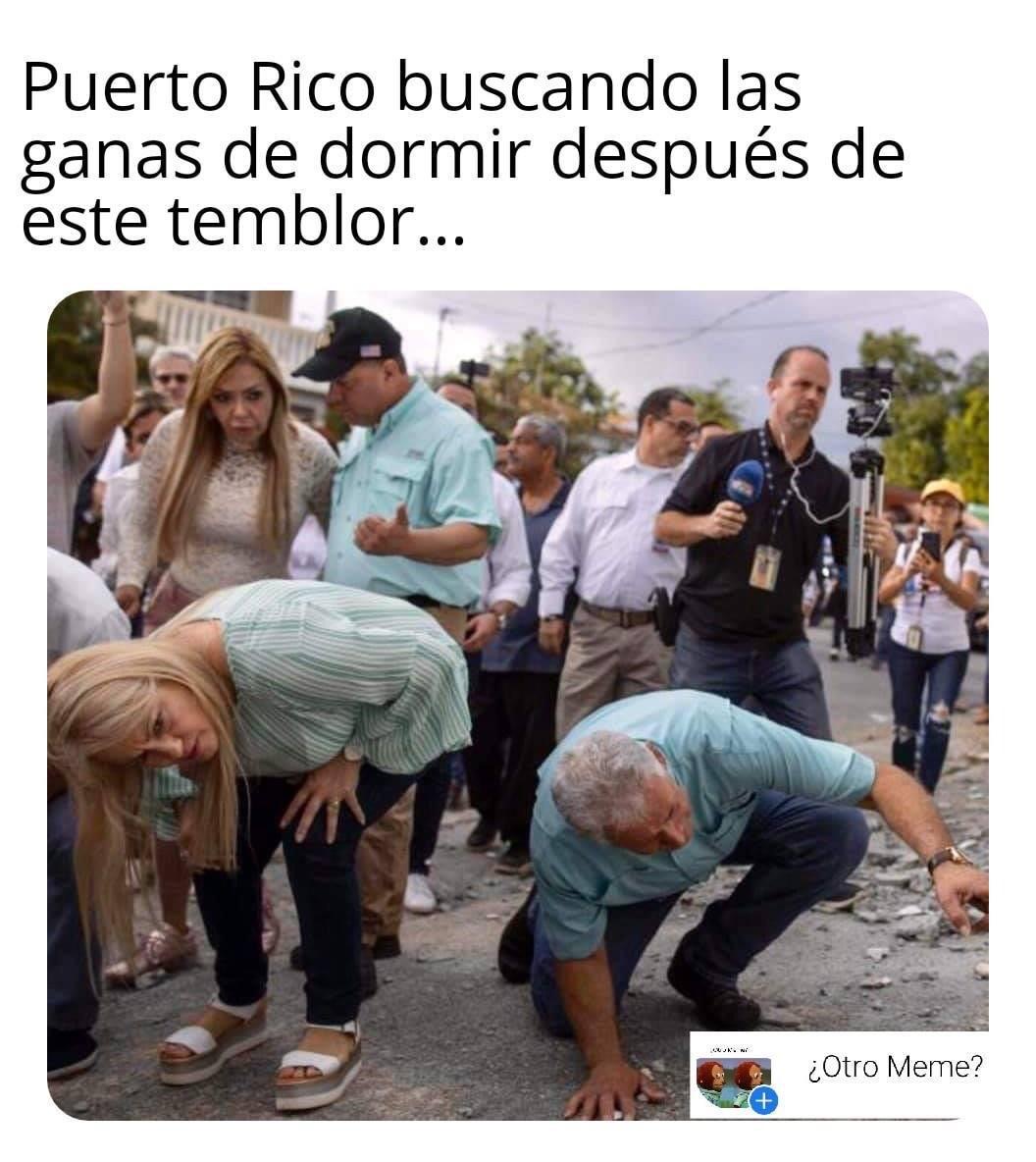 Once again, much of the archipelago is still in the dark. I was shaken my relatives started to say “Buenas noches” in WhatsApp as night crept in. It was a throwback to the days, weeks and months without power after María. Again, going to bed early, hoping for a better tomorrow. Some planned to sleep in their cars, other in tents in their yards. Most were thankful that the day had gone without another major earthquake and prayed they could close their eyes and get some rest.

As I finished writing this piece, night has crept again in Puerto Rico and the family chat gets flooded updates on sleeping arrangements, power, water, supplies, exit routes in case of a tsunami, calls for the emotional tranquility to return after another day of aftershocks; and the habitual jokes, bringing  comedic relief to a challenging situation. Once again, haciendo de tripas, corazones.

Tomorrow is another day.